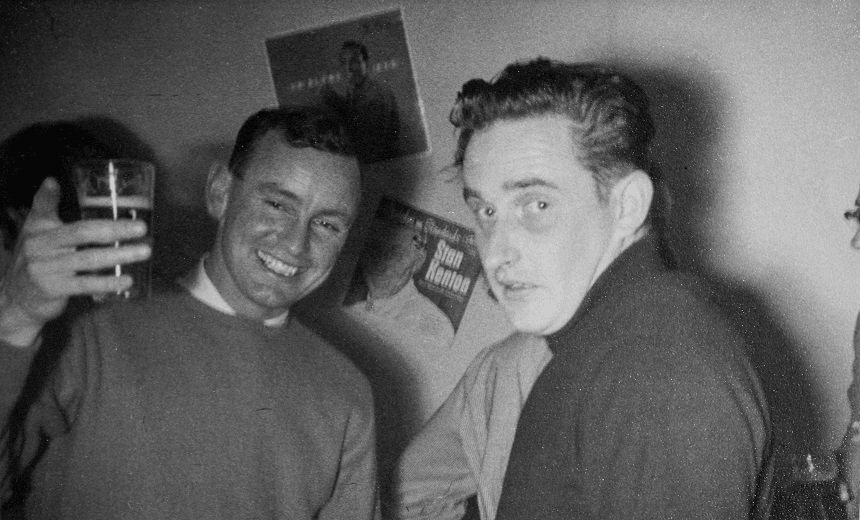 By Rachel Barrowman
Guest writer
Made possible by

An excerpt (lightly edited – the least it needed! So many semi-colons!) from the masterful biography Maurice Gee: Life and Work, by Rachel Barrowman (Victoria University Press). In this early chapter, she writes of Gee as a young, unhappy misfit in Wellington, putting up with James K Baxter and enjoying his time as a hospital porter in the morgue…

He found himself a bedsit in Thorndon, hard up against Tinakori Hill. It was one half of a lean-to at the back of the landlady’s house, with another man in the room next door and a tiny shared kitchen, bathroom and toilet block further along. But Nigel and Julie [Cook] moved to a cottage on the Terrace, and offered him their place at 112a Ghuznee Street.

It had been just a shed when Nigel rebuilt it into a “bachelor pad”. There were two rooms, one up, one down: downstairs a small kitchen stove and sink, and a table screened by a shelving unit from an open staircase leading to a hole in the ceiling; upstairs there was a shower box, a desk between the two windows and a bed built in across the end of the room against a blood-red-painted wall; when he stretched out lying down he touched both walls. Coir matting was on the floor. The toilet was outside out the back. It was known by everyone as “the bach”. Gee lived there for the best part of a year and a half; it was, he would years later say, his favourite of all the places he had ever lived in.

There were always people round, visiting, sometimes sleeping downstairs on the floor. Dick Packer, a well-known and volatile pseudo-literary character, carried a large unfinished manuscript about with him and fancied himself as New Zealand’s Rimbaud. Baxter visited regularly, and two or three of his alcoholic friends to whom Gee lent too much money (making the mistake once of giving one of them his key: he took all the money he could find). One night a cross-dressing Wairarapa farmer tagged along with the group after pub-closing time, disappeared back to his hotel for a while as they sat crammed around the little table sharing a meal, and returned wearing a pink blouse with short puffed sleeves—he had listened to them talking and thought they wouldn’t mind.

It was through Nigel Cook also that he found one of the best jobs he ever had, as a porter at Wellington Hospital. He had this job for most of the year, and loved it: wheeling patients to the wards in chairs or on trolleys; collecting dirty laundry, delivering meals; taking used instruments to the autoclave and warm specimen dishes to pathology; helping the nurses change oxygen bottles and turn patients who were too heavy. And the morgue run, with a trolley with “a lid like those dishes where you carry in the roast”, helping the nurse transfer the body onto the morgue table, arrange the jelly-like limbs and bind tight the jaw.

Down in the ambulance basement, where trolleys waited in a “bleak windy corridor”,  Mac the attendant—”bitter of face, tiny sharp eyes”—fed the sparrows that nested in the pipes and concrete beams.

He enjoyed the backchat with the nurses, speeding the trolleys along the corridors and round corners, and the time spent sitting around on benches outside the receptionist’s office waiting for new patients to come in. It was experience he stored for future use, making notes in his notebook.

Hospital portering was a full-time job with regular hours. Social—and literary—life went on in the pub, at parties, and in the coffee bars which had appeared quite suddenly in New Zealand’s cities in the mid-1950s. Establishments serving real coffee made on imported espresso machines and furnished in European-modern style, where one could sit and talk, or, on one’s own, read or write if one had nothing else to do, for as long as one liked. Pubs closed at six; the chicest of the coffee shops stayed open all night.

“Unknown in New Zealand . . . little more than two years ago”, the Listener observed in 1958, “today they are as much a part of the local scene as the TAB—and almost as ubiquitous”, with their characteristic decor of “concealed or subdued lighting, pot-plants and foam-rubber or cane upholstery”, and “the atmospheric gimmick—the fishnet curtaining, the low-wattage electric bulb, the tropical fish-tank, the contemporary print”.

Gee went most often to the Picasso on Willis St, as well as Man Friday on Dixon St, where there were “black footmarks painted on the wall”, and Casa Fontana on Victoria St, where a jazz band played on Sunday nights.

The hotel they drank at was the St George. Baxter was regularly there, drinking sarsaparilla, not beer, having joined AA.

As always Gee was a quiet, observant presence. In the back bar of the George he was conspicuous only by the Waitematä Rugby Football Club blazer he always wore, unfazed by the gentle ribbing it attracted. He wore it not as any sort of statement or affectation but simply because it was a perfectly good blazer.

A “scrape” he, Kevin and John Yelash “got into with the police” one night was uncharacteristic. Leaving a party, very drunk, and passing the open door of a flat on The Terrace, they helped themselves to food they saw lying on the table and to several items from the kitchen cupboards, including an electric kettle. The next morning, alarmed by what they had done and worried that the robbery would be reported, they disposed of the loot down a rubbish chute in the Dixon Street flats and decided that it would be wise to leave town for a while. Gee went to Paeroa for a few days and stayed with the Seatons, and told them—proudly, Bruce thought—that he had been getting himself into “some pretty shaky sort of situations” in Wellington and had had to get out. The robbery was not, in the event, reported and the police were never involved.

This criminal escapade didn’t compare with some of the other things Yelash was getting up to. Later that year he took off down south on a road trip with his girlfriend, Diana Fussell, the young and love-struck daughter of the governor of the Reserve Bank of New Zealand (she had been Robin Dudding’s girlfriend, until the day Gee witnessed the more magnetic Yelash “steal” her from under Dudding’s nose), forging cheques in her name along the way. Eventually they were caught, and Yelash charged on two counts of forgery and sentenced to a year in gaol.

And yet, for all the bohemian romance and occasional drama, the fun of fast-cornering trolleys down hospital corridors, and the overall thrill of being in Wellington, he was not happy. He was lonely. He didn’t have a girlfriend and didn’t know how to get one. He had long talks with Julie about his relationship troubles: about his unrequited longings for Meg and for Angela. She was both worried for him and puzzled by the intensity of his pain—wondering how real, let alone realistic, it was, feeling that his depth of suffering seemed out of proportion to its cause.

At weekends he would often wander the streets alone, looking for someone to talk to. One day he followed a young couple walking hand-in-hand along Willis Street and Lambton Quay who were demonstrably in love, “in a world complete and timeless”, and envied them.

Writing to Maurice Shadbolt the following year, he adopted a certain existentialist swagger in describing how he had lately “been alternately calm and depressed—depressed because I can’t even begin to see my future, calm when I realise it doesn’t really matter—good or bad something will happen”.

He seemed typical of a young man with literary interests in the 1950s. But he did not feel typical; and his problems were not typical. He thought he was odd, that he was not normal. At the heart of his inability to engage romantically with women was his adolescent torment and the ongoing problem of sexual performance (something he did not talk with Julie about). But there was something else too, larger than this “trouble”, and more personal than existentialist alienation. Writing to his mother two years later he tried to explain his sense of himself as being somehow not part of real life: “I’m a spectator more than an actor—all my own problems & feelings seem fake—definitely unimportant. It’s a queer position to be in…”