AJ Lancaster celebrates dukes, the new and improved Eloise, and the death of the Halfway Hymen.

In real life my values (left wing, feminist) almost diametrically oppose everything dukes represent. In fiction, though? I love them – and I’m not alone.

Regency romance is perennially one of the most popular subgenres of the biggest fiction genre, which is romance, obviously. A spot-check on the top 100 Regency romance books in the Amazon store finds 20% contain the word “duke” in the title, including the first Bridgerton book, The Duke and I.

“Just make the hero a duke if you possibly can,” one best-selling Regency romance author advised a group of writers at a conference I attended. She sounded resigned. Mr Darcy in a wet shirt has a lot to answer for: my first taste of period drama was the 1995 BBC adaptation of Pride and Prejudice. But although Regency romance technically shares the same setting, the subgenre owes more to Georgette Heyer than Jane Austen. Austen was writing contemporary fiction; Heyer, whose first book was published in 1921, pieced together historical research to construct a world that never quite was, a world composed entirely of attractive dukes, feisty virgins, London Seasons, balls, cross-dressing, and duels at dawn (while leaving out all the syphilis and infant mortality).

I discovered Heyer in my late teens, and from there continued onto more contemporary Regency, oxymoronic though that sounds. I have yet to run out of either dukes or enthusiasm for them. For me, the appeal of this genre lies in its delicious melodrama, far enough removed from real-world problems to make for safe escapism. The Regency-romance duke is as much a creature of fantasy as a dragon. He is: handsome; single (until he meets the heroine); only one step down from royalty in power but without all the hassle of being responsible for a country; good in bed (but without the aforementioned syphilis); sees the heroine as his equal despite the time period in which he lives, and is one of 10,000 or so like him to be found in Regency England.

The soul of Regency romance is not historical accuracy; it’s period-piece aesthetics and the heightened emotional drama of finding love within the tight confines of a restrictive society. Modern Regency has continued to build a quasi-fantastical shared universe on these foundations. Readers care about accuracy in matters of fashion and address but will happily accept modern hygiene standards and statistically improbable numbers of attractive people.

And then there’s the smut.

Though Heyer’s romances were chaste, the doors to the bedroom have long since been flung open in the genre. Bridgerton is cut from this more modern cloth, combining a breezy style and implausible (but fun!) plotlines with Regency aesthetics.

I first read the Bridgerton books several years ago. There are eight books in the main series, each centred on a different Bridgerton sibling. I admit I chomped through them so quickly that individual instalments merged together not only within the series but with every other Regency I’d read, yet two things stuck.

One was the large family-centred premise. While it’s normal for romance series to introduce a set of characters who all need to find their happily-ever-afters, it’s pretty bold to put forward seven sequel-bait characters at once.

The other was Lady Whistledown, the mysterious gossip columnist who serves as both plot device and source of helpful exposition. Her identity isn’t revealed until book four in the series, though the show reveals it at the end of the first season (I assume that’s because it’s easily Google-able).

Otherwise, I’d filed the series under “solid enjoyment but not a favourite” and continued in my personal duke readathon. Then the news broke that Netflix had picked up the books for adaptation.

At least in the circles I lurk in, there was a sense of both excitement and wariness. Finally, someone was making a show for us! It might showcase the appeal of a huge and beloved genre and inspire many more adaptations in its wake. Conversely, it might completely miss the mark and bring yet another wave of snarky contempt down upon lovers of this genre. It would hardly be the first time romance readers have gotten flak for what they enjoy.

Also under discussion was the fact that Bridgerton is an older Regency series. The first book is more than 20 years old; all eight books came out between 2000 and 2006, and so the series doesn’t reflect the current and evolving conversations the genre has been having, particularly on the issues of consent and diversity.

But Reader, I confess I love the show more than the books!

The bright colours! The modern music! The gorgeous costuming! I think the duke wears a different embroidered waistcoat in nearly every scene. Bridgerton utterly captured both the escapist joy and inherent fantasy of this genre and then took it one step further, in a direction I’ve been longing for the subgenre to move.

When I saw the show had made the duke Black and cast people of colour among wider Regency society, I felt like punching the air in triumph. The book’s cast is 100% white, which is sadly still the norm in the genre. But why should people of colour be left out of the fun or have to settle for a cut-price version, appearing only on the edges of Regency society if they appear at all? Why shouldn’t they be right in the centre of it? Why not Black dukes?

The show also improved on the books’ LGBT content – not hard, admittedly, since the books contain a grand total of one gay person, who is a minor character in the eighth and final book. I’m hoping we see more on this front in future seasons.

The show has also fleshed out secondary characters by showing what they’re up to when they aren’t with our hero or heroine. In the first book, we’re limited to only events that Daphne or Simon see, as they’re our point-of-view characters, but in the show we get more insight into not only the other Bridgertons but to characters who barely appear in the first book, the Featheringtons in particular.

Eloise Bridgerton’s characterisation probably benefits the most from this extra attention. Book Eloise isn’t outspokenly feminist, nor does she express a desire to pursue higher education over marriage, and I’m interested to see where the show takes this as a result.

I’m also hoping future seasons divert from the books for Eloise specifically – she reads as a prime candidate for a lesbian romance, and I detest Book Eloise’s love interest. He’s an angry loner who wants a wife so he can abdicate responsibility for his young children and household and spend all his time playing with his own hobbies instead. And that’s exactly the “happy ending” he and Eloise get. Hers is the only book I don’t recommend. 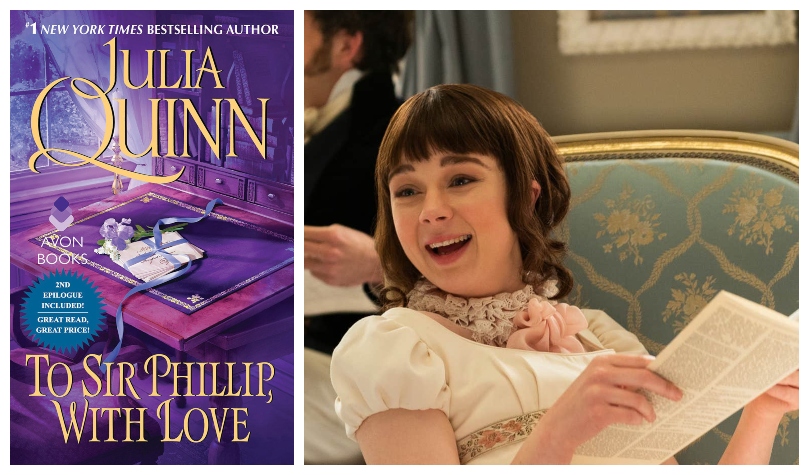 Anthony Bridgerton’s character, conversely, comes across significantly worse on screen. Book Anthony’s affair with his opera singer happens “off-screen”, he isn’t the reason for Daphne’s lack of suitors, and he doesn’t try to make her marry Nigel Berbrooke. Anthony will be the hero of season two so he’ll presumably need to be redeemed!

I’ve been re-reading the books post-show, and one thing that feels particularly dated now are the sex scenes. Whilst Regency continues to love its virginal heroines, increasingly books have allowed said virgins more confidence in their own sexuality. In Bridgerton, seven out of eight heroines have never even masturbated; the remaining heroine only knows what’s what through having been previously married.

The Bridgerton books also feature the Halfway Hymen, which has thankfully begun to disappear from more modern books. The Halfway Hymen is (a) located halfway up the vagina in defiance of real-world anatomy and (b) always detectable by the hero mid-thrust. Here’s a classic example, from Benedict’s book, An Offer From A Gentleman:

It seemed the best way for him to keep her from overanalyzing a moment that should have been pure sensation and emotion was for him to keep moving. And he did. Inexorably forward, sliding in and out until he reached the fragile barrier of her maidenhead.

…  He felt her stiffen slightly around him as he broke through her maidenhead, and he bit – he actually bit his hand to keep himself from coming at that very second.

In its first season, the show had to keep Daphne’s uber-ignorance about all things sex and procreation in order for the plot to make sense, but it allowed her a moment we never got in the book: confronting her mother in justifiable anger for failing her.

The show also better handles the semen-harvesting scene between Daphne and Simon. In the book, Daphne actively decides to take advantage of a drunk Simon to get his sperm even when he resists.

He was in her control, she realized. He was asleep, and probably still more than a little bit drunk, and she could do whatever she wanted with him. She could have whatever she wanted … His eyes pinned upon her with a strange, pleading sort of look, and he made a feeble attempt to pull away. Daphne bore down on him with all her might … She planted her hands underneath him, using all of her strength to hold him against her. She would not lose him this time. She would not lose this chance. A still from the scene in question (Image: Supplied)

In the book this crossing of intimate boundaries is never addressed between them, and Daphne isn’t presented as having done anything wrong. Whilst the show doesn’t explicitly condemn Daphne’s behaviour in this scene either (which I would’ve liked to see), that lack feels less egregious than in the book, where the consent issues presented are worse.

Quibbles aside, I’ve been delighted that the show has done exactly as I hoped and invited a new audience to share in this tropey world of high drama and small stakes. We’re getting four whole seasons of this! Think of all those embroidered waistcoats!

Assuming season two follows the plot of book two (The Viscount Who Loved Me), and features Anthony as the hero, there’s a scene I’m particularly looking forward to seeing adapted. It’s an outstanding example of this genre’s propensity for ridiculous chains of events that somehow result in having to get married. I won’t spoil it, but it involves a bee.

Unfortunately, post book one, there are no more dukes to be found in the Bridgerton series, but I suppose you can’t have everything.

A reading list for Bridgerton devotees whilst they wait for the next Netflix instalment: