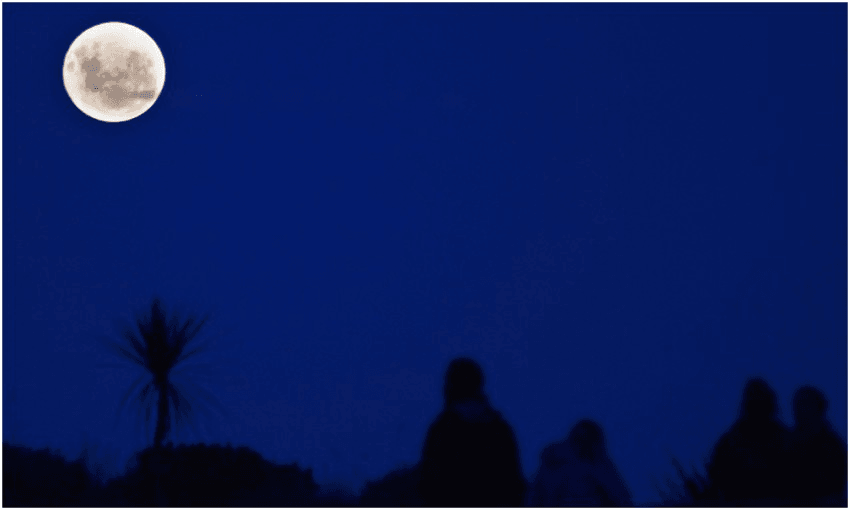 The Unremembered, a short story by Patricia Grace

By Patricia Grace
Guest writer
Made possible by

This short story, The Unremembered, appears in the new collection Scorchers: A Climate Fiction Anthology, alongside stories from celebrated Australian and New Zealand writers such as Tulia Thompson, Renee Liang and Witi Ihimaera.

There was this woman named Rona. She was the one pulled up to the moon for swearing.

Rona was ordinary – wife, mother, three kids. (Strictly speaking she had many children because in those days your sibling’s children were your children too. Your first cousin’s kids were also your kids. They were truly yours because they all had the same grandparents. Cousins were not referred to as cousins, but as brothers and sisters).

Anyway, Rona, wife and mother, was also maker of garments, baskets, mats, containers; hunter, gatherer, carrier of water; storyteller, gossip. When men went to war, Rona went with them, providing food and water to fighters, joining in the fray if that became necessary. Maybe she was sharp tongued and quick tempered as well. But, ordinary. Same old same old.

So, what was this ordinary woman doing, sitting up there in the moon? Those who chose to stand in judgement of her said it was her own fault that she’d been taken up, never to see her people or her children again. Brought it all on herself, they said, when, one moonlit night she went running along the tracks to the spring to fill her calabashes with water. She was almost there when she tripped and fell. Most of the calabashes broke. Her ankle broke. Bang.

Rona, in her pain and confusion blamed, not the passing cloud, but the moon, for her being unable to see the tree roots which caused her fall. She looked this most eminent ancestor in the eye and yelled a few bad swear words.

Moon was not going to stand for that. By way of punishing Rona, she wrenched her from her sitting place and took her on a journey to the sky. Rona grabbed a nearby tree in an attempt to anchor herself to Earth, but the tree was uprooted, and there she was, sailing away, the mānuka in one hand and the remaining calabashes in the other. Ka mau te wehi!

That is why, up there, on the night of Rākaunui when Moon is at her fullest, Rona can be seen with her little tree and her water containers.

In many accounts this is where the story ends, the moral of the tale being about respect – watch your tongue, taihoa or verbals, disrespect those on whom life itself depends and you’ll be the loser, abuse your ancestors and you abuse yourself.

More extended accounts of this story, while not diminishing the lesson to be learned, throw a more positive light on Rona’s situation. And this is where ordinary becomes extraordinary. This is where the wife, mum, provider and sometime warrior becomes elevated in more ways than one. It’s the time when Rona, in partnership with Moon, becomes the tide controller. Tai timu, tai pari – the tide comes in, the tide goes out, according to the pull and release of Moon-cum-Rona. Seasons come and go under their influence.

So, the wrong-doing on Rona’s part, in time, became a positive for her. She lived down her misdemeanour and though she never saw her kids again, she knew they would be all right with all their other mothers. She would never see her people again, but knew she could be of service to them in her new role. It was a peaceful, war-free existence Rona led.

People, because their life depended on it, understood all these moon phases inside-out, back-to-front and every-which-way. That’s how they knew when to plant or harvest their spuds, corn, etc. It’s how they knew when to fish, gather shellfish or parengo. Calendars, all in their heads. Everyday stuff. When to go to war entered into the calculations. No one wanted to be doing war stuff at planting or harvest time, or when the blind eels were running.

Perhaps the children missed this particular mother. Perhaps the people missed this particular personality and the extra pair of hands, but maybe as time went by, it could be with a sense of enormous pride that Rona’s descendants looked up and whispered that it was their tūpuna, Rona, who rolled and unrolled the tides, ordinary become extraordinary.

As there is no more on record regarding this piece of storied history to do with Rona, Moon, tides and seasons. If we thought to update or extend it, and if we dared, it would need to be a matter of DIY.

As the centuries went by Rona couldn’t help noticing all was not well with the world out there. She noticed little things at first, which she didn’t like to draw attention to. Rona watched her tongue these days, didn’t want to speak out of turn or to seem unduly critical, but she became more and more worried. After much thought she decided to share her concerns with Moon.

“Something’s not right out there on the world,” Rona said to Moon.

“You don’t have to spare my feelings. I’ve already figured the problem on Earth is to do with my own species.”

“Killing off other life forms who’ve been living together long before they, myself included, came on the scene. Leaving them to die. Pulling the guts out of Earth, the provider, she who sustains all of life. Who in their right mind … ?”

“Killing their tuākana – plant life, all creatures. Out of control, running amok.”

“It’s a development, a malfunction, I believe. A rogue element has taken over the susceptible.”

“Now they’re ravaging forests and waters, despoiling the atmosphere, trampling all over those who are their older brothers and sisters. Unremembering has led to a perceived Eminence, which became Ascendancy, which became Dominance, which became Superiority … ”

“Not to mention Arrogance, Abuse, Avarice … ”

“Oh no, we couldn’t do that, couldn’t bring them here, they’d trample all over us,” said Moon, “they’ve already visited and thought nothing of going away and leaving all their debris floating about.”

“I was pulled up, punished. I learned my lesson.”

“Or perhaps you were saved, taken away from a worsening situation. And anyway, punishment wouldn’t help.”

“I think you’re being too conciliatory. Someone has to make a call. The way I see it is they’re stealing from their own kids, messing up the lives of their own descendants, taking the futures of their grandchildren from under their feet. With respect I think you’re excusing them, indulging them. Something needs to be done.”

“Earth’s fighting back,” said Moon. “She doesn’t need ngā tāngata for her own survival, but out of kindness, out of love for the pōtiki she sends out warnings – Fire, Water, the Plague.”

“There are the bystanders and the deniers, then there are The Voiced, who know they are affected, know they are part of it all. They’re fighting for their lives and the lives of those to follow. Theirs are voices that echo round and round in tunnels without end.”

“They are the innocent, the neglected, the abandoned, the downtrodden, the rawakore, who live with death, who have done no harm, but who are collateral damage within the destructive environment of those who eat the world.”

“But, I too, am of The Unremembering who are self-destructing,” said Rona. “I am also of the Voiced and the Unvoiced. I am all of them. All of them are me.

“I must return to be among my society – ngā tāngata – as we take our leave. None should remain as Earth regenerates … ”

“Without its last born?”

“ … Who will become The Unremembered.”