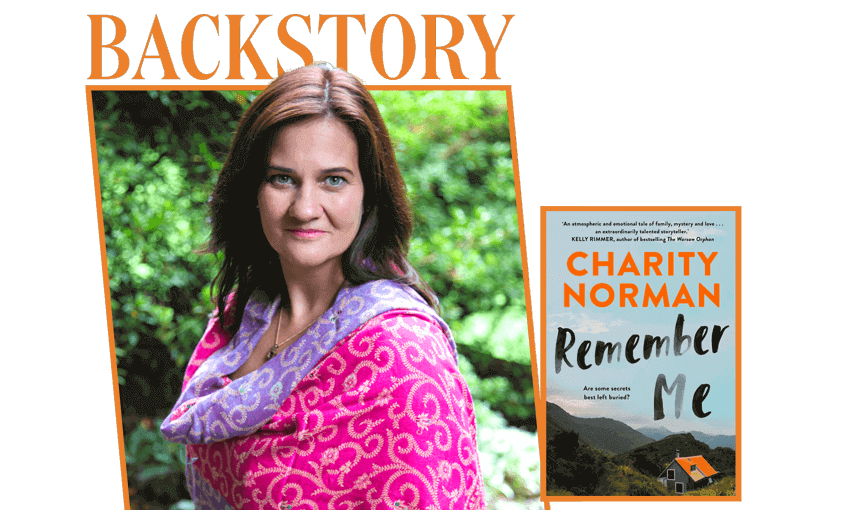 Backstory: Remember Me, a novel about dementia and choosing a good death

Charity Norman talks with books editor Catherine Woulfe about the family story behind her latest novel.

If you love someone with dementia then you know that most novels featuring dementia use it as a plot point, a layer of slapstick, a get out of jail free card. It’s infuriating. Boring. Insulting.

You also learn to recognise when a writer’s been through the fire themselves.

In the opening pages of Charity Norman’s new novel Remember Me, main character Emily arrives at her family home and greets her father, recently diagnosed with Alzheimer’s.

His smile was too sweet, too empty, too anxious [… ]

I counted to three before he turned into himself again. The lights came on, and there he was.

“Emily! Of course it is. Sorry … the sun in my eyes, couldn’t quite see … didn’t recognise your car. Hired, is it? No need for that, you can use mine. Well, marvellous, you’re here.”

Father and daughter both pretend it hasn’t happened. They head inside and he tries to make tea, opening and shutting the same cupboard three times. She quietly takes over. And from that point, I knew that this book was not one of the shit ones. It’s actually, I think, the most clear-eyed and compassionate novel I’ve read about dementia – and about caregiving, an aspect of this disease that rarely rates a mention.

Like all Norman’s books Remember Me is also a compulsive read; it has layers and layers of story, all pulling together. Emily flies in from the UK to look after Felix, formerly a small-town GP, in the family farmhouse in the foothills of the Ruahines. Felix is keeping a precious secret and much of the book’s engine is Emily figuring out exactly what it is. Mixed up in the secret are the neighbours, a family touched by Huntington’s – the father died after a long decline, leaving two adult children. The daughter has been missing in the bush, presumed dead, for decades. The mother cared for her husband through Huntington’s and is now spending a lot of her time and energy caring for Emily’s dad.

The novel is also extraordinarily moving in its exploration of the notion of a good death. I cried and cried at the end and then I asked for an interview. There must be a real story behind this one, I said. You don’t write a book like this without a story.

And so one Sunday morning Norman drives from her Central Hawke’s Bay home to a spot under a phone tower where she can get decent reception, and she tells me the story of her mother, Beryl. Beryl, a terrific academic and linguist, a mother of seven, died with Alzheimer’s in 2016. All sorts of moments in the book mirror the family’s real experience.

Let’s start with that scene at the doorstep. A parent not recognising their child.

“There was a time I arrived at her front door from New Zealand, having just flown in, and for a few moments there she didn’t know who I was,” Norman says. “She said ‘Oh hello, can I help you?’ And I said ‘Mum!’ And as I came into the light she said ‘Oh sorry, it was the light behind you’, and she covered it up. She was brilliant at covering it up. And Dad covered it up.”

It’s suggested in the book that Felix’s dementia might stem from his insomnia. Norman has always wondered whether that was a contributing factor for her mother. “My mother stopped sleeping after my brother was killed in a helicopter accident in 1991. [And my sister], a few days before her 27th birthday, had a catastrophic moped accident and lost her intellect and has never had a normal life really since. I can’t help but suspect that the depression that those brought on, and the lack of sleep, contributed.”

In the book Emily finds old diaries of her father’s. In them she can trace his decline and see that he’s been hyperaware of it, too. It’s a hard moment for both Emily and the reader, and a crucial catalyst in the narrative – and this, too, happened to Norman.

“Several of the things that I wrote in that diary of Felix’s were exactly what I found [while cleaning out my mother’s room]. It was extraordinary, there was a pile of them just like there were in Felix’s desk, she’d kept them all there together in one corner of the drawer and there was everything in there, you could sort of chart her growing awareness of her erasure.

“You began to notice that her handwriting wasn’t quite what it had been but also that she was starting to do eccentric things like writing things in capitals and underlining them … I had Felix do that.

“She’d written down who she was and what her job had been, how she was a teacher and how she’d been born here and lived there. ‘I played violin.’ This kind of thing. Reminding herself of who she was. And she wrote her parents’ names.

“At the back she had written the names of all her children, and her sister, and a girl called Yani who was one of the Kindertransport children, a Jewish girl who my mother’s family had looked after during the war. She’d written her name, Yani, and she underlined it and she wrote ‘never forget’ next to her name. Which is extraordinary, and fascinating.”

Felix does all of this, too, except the person he strives not to forget is Leah, the girl next door, the one who’s missing. Finding out why becomes Emily’s great distraction.

Despite all the similarities it strikes me, I say, that Norman gives Emily and Felix a much happier story than her own. She says her mother neglected to clean herself and became violent, unmanageable, a “Mrs Rochester”; she was adamant that Felix would keep his dignity. Her own mother died while Norman was rushing to be with her – she got the call in the transit lounge of Hong Kong airport. Emily, on the other hand, makes it home and spends a meaningful five or six months with her dad. They often have coffee together in the mornings. They do Sudoku, they talk. Felix tells old family stories. Between the moments of blankness and confusion there is warmth, and lucidity, and great love. Emily: “Often we sat in companionable silence, watching cloud shadows scudding across the landscape. Precious hours. Despite the sadness and strangeness of my father’s disintegration, I felt as though something was mending inside me.”

After their long and mostly lovely goodbye, Norman also gives Emily – and Felix – closure. Honestly, as far as having a parent die of dementia goes, it’s pretty perfect.

Norman: “I suppose a psychologist would suggest I was doing that because I felt I hadn’t had that myself. And I’m just thinking is there anything in that? And perhaps … perhaps there is.”

At the end of our conversation I end up in tears, thanking her for her book. Later she messages to say she’s been thinking, and there’s no “perhaps” about the gift she gave her main characters. “You were right … I hadn’t quite seen that in myself until I talked to you. I did give Felix and Emily something that my mum (and your dad) and millions of others never have.”

Remember Me, by Charity Norman (Allen & Unwin, $32.99) is available from Unity Books Auckland and Wellington.

Does your book have a great backstory? Doesn’t have to be a novel, or fiction, or even a book for adults – the backstory’s the thing. Get in touch: catherinewoulfe@thespinoff.co.nz