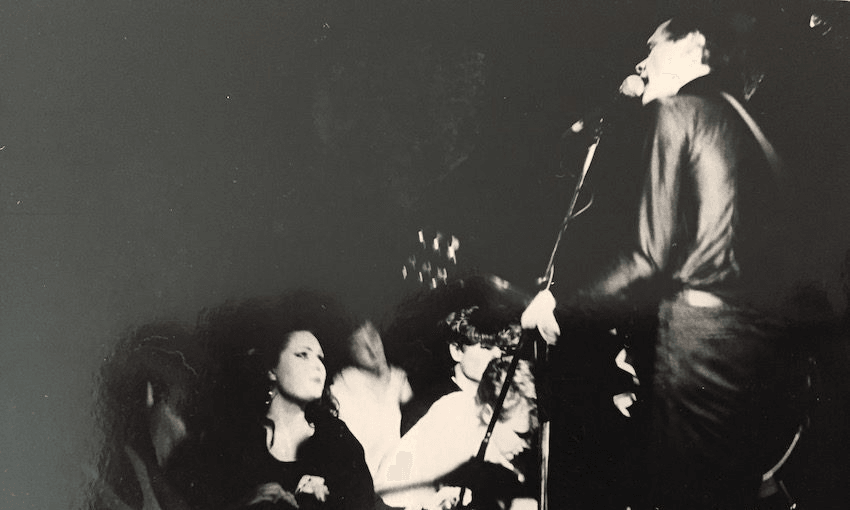 SHAYNE CARTER ON STAGE AT THE CARLTON IN CHRISTCHURCH (PHOTO: RACHAEL KING)

SHAYNE CARTER ON STAGE AT THE CARLTON IN CHRISTCHURCH (PHOTO: RACHAEL KING)

Dead People I Have Known, a memoir, just won the General Non-Fiction category at the New Zealand Book Awards.

The judges were Hocken librarian and documentary and cultural heritage collections advisor Sharon Dell, bookseller and reviewer Stella Chrysostomou and journalist Guyon Espiner. Their comments, per the press release:

“From the first page, Shayne Carter invites the reader to jump right in and come along for the ride. What follows is an illuminating insight into his childhood, shaped by violence and addiction, of a boy who didn’t fit in and felt saved by music … it is a fascinating look at what it means and feels like to be a creative obsessive – pushing towards perfection despite and because of, addiction, oblivion, and isolation … It is rock-star writing: entertaining, revealing and incredibly heartfelt.”

Carter also took out the E.H. McCormick Prize for best first work of General Non-Fiction. That prize was worth $2500; his wider category win was worth $10,000.

The award ceremony was streamed on YouTube. Winners gave speeches to their screens – no-one got anywhere near a stage. So we thought we’d run a wee bit of the opening section from Dead People I Have Known, where Carter does get his proper dues.

I’m in the town hall with my head in a pot full of serotonin. About me is the full scent of perfume, freshly pressed jackets, fear, alcohol. I have taken a pill, a very strong pill, and the first effect of it just dropped. My bandmates all wear baffled looks that probably mirror my own.

Half an hour ago we opened the show with two of our favourite tunes, and when our last chord died, it lifted skywards and stayed in the rafters like an old-school victory banner.

Straitjacket Fits are fresh from a tour where we’ve regrouped for a short reunion, and it’s our last stop tonight. We thought we should celebrate, naughtily, a bit illicitly – but back in our seats the wisdom of this may have died.

It’s the bNet New Zealand Music Awards, an evening to honour New Zealand’s edgiest musicians. Half of Auckland is here, turned out in their town hall gear.

There’s a roar. The Prime Minister has come out on the stage. Helen Clark is popular with loser musicians because she’s the Arts Minister, and she has been for six years. She seems to genuinely care about people no one else cares about.

She starts a speech that I’m too far off to hear, her voice low and buried, like a shovel. Slowly, key words wander in from the haze.

It is now apparent that her speech concerns me. There is no joy in this realisation, just an immense dread, brought on by the potent E.

The audience claps and starts to stand, and I stand too, like I’ve been sent to the gallows.

I set out on a lonely walk.

As I take the stairs to the podium, I risk a quick peek at the crowd and I can see that it goes back forever. People are peering down from the balcony.

The Prime Minister waits at the rostrum, clutching a statuette, and she wears a dark blue pant suit and red lipstick. She looks different in real life, but maybe that’s just me.

With no real plan, I charge across the stage. Best to get this over.

“Heh heh heh,” the PM says as I press her into my chest.

She takes a short step backwards and hands me my award, smoothing the front of her top.

“Thanks, Helen,” I reply, as casually as I can.

I turn to face the mob.

“Thanks,” I say, and my thanks slaps back.

“I wasn’t expecting this, so thanks,” I go, repeating myself.

This is the whole of my speech.

The Prime Minister makes small chit-chat as we walk backstage, but I don’t listen because I’m busy plotting an escape route, any escape route, one that is as fast as possible.

I’m now aware of the two men hovering around us in understated suits, both of them blending with the walls. Wires curl up from their collars and into white plastic pieces in their ears, and when I catch the eye of one of them he gives me a lift of his eyebrow as if to say, “Tied one on, eh matey?”

This is my cue to run. I touch the Prime Minister gently on the elbow. “I’m feeling a bit overwhelmed, Helen. I think I’m going to have to go away and compose myself.”

Without waiting for her response, I turn and stride off down the hall.

Dead People I Have Known by Shayne Carter (Victoria University Press, $40) is available from Unity Books. Read an essay that Rachael King wrote in response to the book, here.