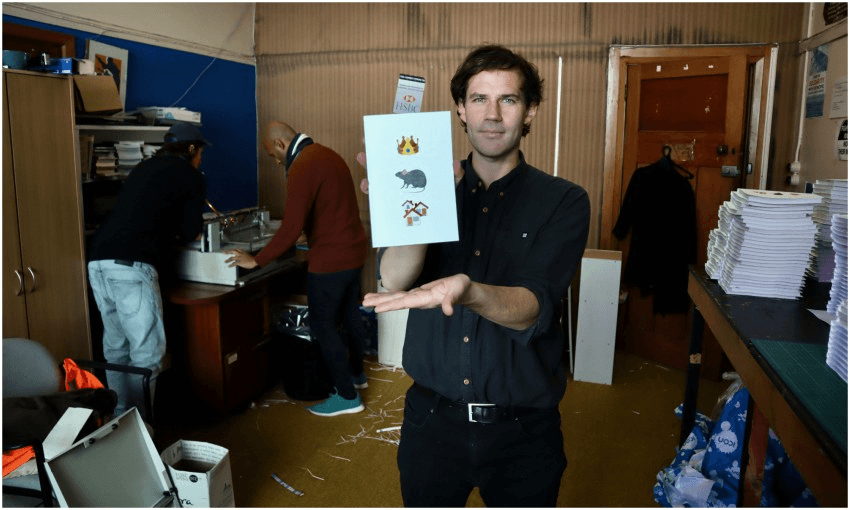 The scamp of New Zealand publishing is laid to rest, for now.

In 2005 I wrote and released a book called On the conditions and possibilities of Helen Clark taking me as her Young Lover. I gave myself the name Richard Meros.

My real name is Murdoch. Some people think that sounds like a pseudonym, too. It’s not. At one point we couldn’t release an author with Lawrence & Gibson, the publishing collective where I’m editor, without people thinking that I’d written it. In the early days it was even rumoured that Brannavan Gnanalingam was one more of my pseudonyms. I had to explain, “the name is Tamil … not absurdist.”

I want to explain why this Meros fellow came into being and why I am now putting him to rest.

OTC&POHCTMAHYL came to me in one of those feverish moments that characterised my youth. I had intended it to be a simple two page article for a student magazine that a friend was editing at the time. If I had pitched it, I would have said this: the author proposes to study the exact circumstances in which a) the prime minister would take a young lover and b) the conditions for that young lover to be me. The book was as much of a joke on earnest sociology students as it was a treatise on desire and power. I still love the book. It’s straaaaange and full of pep. But it’s also purposefully out of print. If people want a copy there ought to be plenty of secondhand ones about as we sold hundreds, even thousands, of them (note: people ask me if there’d be a Jacinda Ardern/middle-aged lover book; I’ll tell you at the end about my never-to-be-realised Ardern book).

There is already plenty out there – on the google, wherever that is – about who I am: Wellington-living but Balclutha born, many-generationed Pākehā, sitting astride activism (the refugee campaign), academia (a PhD and some lecturing at Massey on digital media and communication) and the arts (publishing and writing with Lawrence & Gibson). I can understand people still not being sure that I’m the author known as Richard Meros. Once bitten, twice shy and so on. It’s not a big deal tbh.

There’s a significant difference between the normal role of a pseudonym and what I was doing with Richard Meros. Think of it this way: I could have written a novel about a young man writing a mad book about what it would take for the prime minister to take him and so on and so forth. Plenty of authors write books about weird people writing books. Or I could have taken a step back and inhabited the book’s main character, writing through him as a character. That is what I did: I slipped into the life of a character and wrote from his point of view.

Richard Meros, interviewed in 2015. The pseudonym “will be something that flakes away from my skin”, he predicted. (Video: the Wheeler Centre)

So to me, Meros was not a name that stood in for me, but a character I created to write under. Musicians do it all the time with their stage names: Alice Cooper, Grimes, Dr Octagon.

There were two main reasons that I chose to create a character to be the author of these books. The first reason might sound strange: honesty. I know that honesty is supposed to be attaching your real name to something and owning it, but as Judith Collins’ non-event of a memoir shows, sometimes putting your own name on a book precludes you from telling it how it really is. So the honesty I am interested in is not that to-thine-own-self-be-true kind, but the honesty of the person surveying the world and not wishing to censor what they have to say.

The second reason was the opposite of one type of honesty: cowardice. I was in my early 20s and I didn’t want to have to explain my book to each and every person I came across. I wanted the choice to reveal my authorship, but to also avoid talking about it. I really did have a nightmare around this time where the father of a woman I’d been seeing was quizzing me about the fairly lewd “Physiological Considerations” chapter of that first book.

So I wrote and released the book in absolute fidelity to the character. For example, the Meros character was kooky enough that he wouldn’t spell check and so neither did I. He was deluded enough that he imagined schools would teach his book, so I included an appendix on how the book should be taught in high schools. The 50 copies disappeared to friends though they were also on sale through an art gallery in Aro Valley. A good friend, Hamish McKenzie, blogged about it and Toby Manhire wrote a fantastic review of the book for the Guardian. Most people see the Guardian quote on the book and assume I made that up. Then, in 2008 David Cohen called it “the underground publishing hit of the decade” in the NZ Listener. The same year Arthur Meek and Geoff Pinfield adapted it into a barnstoming play and most of the country came to think that Meek was Meros. What did I care? I was the author, I listened from the wings and sold stacks of the book and had a damned good time.

The most recent Richard Meros book was published in 2014. It was called Dating Westerners: tips for the New Rich of the Developing World. The theme was hopelessly obscure and I loved it. I’m not sure if it got a single review. It was the culmination of a young man’s game – where the entire world is open to you and time will go on for ever, so you can waste it with glorious in-jokes. In total I published six books under the Meros name, plus one under Nestor Notabilis, but which featured Meros as a character, and wrote four more that – for one reason or another – were never released.

In 2013, inspired and saddened by what was happening to my friends in Syria (where I’d lived for four months before their war), I started the Doing Our Bit campaign to double New Zealand’s refugee quota. The keen humanism required for that urgent campaign didn’t particularly gel with the dirtbag left Meros. He was put on ice.

After we won that campaign, I went back to writing fiction. I wondered what I would write, if I could write, and whether the intense political activism (as well having completed a PhD on critical theory) would have changed my tone. I wondered if I had another voice inside of me. I wrote a few drafts of books and had plenty of ideas that were Meros-adjacent.

Working with Brannavan Gnanalingam and the rest of the collective at Lawrence & Gibson gave me a better insight into how other writers positioned themselves, their work and the world. Brannavan’s recent work has given me a glimpse at how radical honesty can co-exist with scabrous humour and good will. I may still write another Meros book, but I am not sure. There was something about the intensity of pushing for New Zealanders to welcome people fleeing war that makes me feel I ought to write under my own name. Maybe it’s just that my own name doesn’t mean so much any more. It’s nothing pure, nothing sacred.

I don’t want this to sound like the knowing reminiscence of a person who thinks he sees the world for what it is and in doing so forsakes the silliness of boyhood satires. I still love those books, mostly, and I’d recommend any other peppy young scholars to write the most outrageous, vivacious cacophony that you can.

Finally: the Ardern book would be called, Jacinda Ardern: My Peer and would be about a middle-aged liberal who is convinced that Jacinda is his friend because she’s so nice all the time. He, of course, is utterly deluded and the joke is on me, on us, on the world. That’s satire!

A much better book – and one far more at Ardern, Key and Clark’s expense – is the one to be released under my own name in the coming week: Rat King Landlord. It is a fast-paced book and one I am excited to see come out bearing my own name. I haven’t give up the political angles present in my previous books but I have switched one focus: the book is not satisfying my curiosity for a Meros character arc, but some other kind of story that I think there will be an interest in and a hunger for.