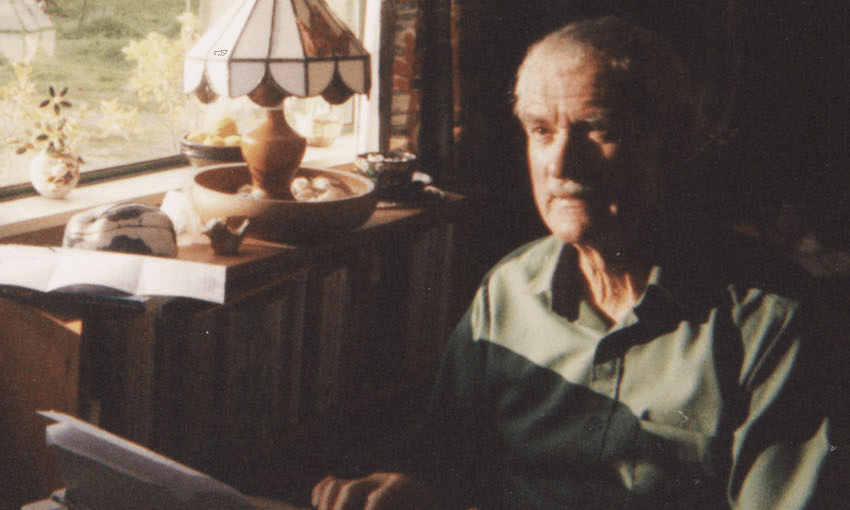 Spinoff Review of Books literary editor Steve Braunias writes: Takaka writer Gordon Challis died on March 2. He was 85. His was a discrete presence in New Zealand poetry to the point where he was defined by absence: in 1960, Landfall editor Charles Brasch named Challis as one of four contenders for poetic fame in the coming decade, but there were 40 years between the publication of his first, acclaimed collection, Building, in 1963, and his comeback book The Other Side of the Brain. “I always wondered what happened to him,” Sam Hunt wrote in his 2009 memoir, Backroads. “The last poem in Building is one of the great love poems of all time, written to his first wife, Magda. It’s a beautiful poem, and then the poems stopped.”

We reprint that poem below, plus three others from his Selected Works (2016), courtesy of publishers Steele Roberts. Roger Steele provided some background information about Challis, that he was born to Welsh parents in England, lived for a time in Barcelona “and made several exquisite translations of Spanish poets into English”, came to New Zealand in 1953, worked as a postman, and later as a social worker and psychologist based in psychiatric units in Porirua and Hastings; “the intense pressures of his work in mental health care led him to abandon writing”.

What was he like, we asked Steele; what of the person? He emailed: “I worked closely and co-operatively with him (he was a pleasure to edit). But I couldn’t say I knew him well: he was a deeply shy and reclusive man. His work was painstakingly wrung out of his inner depths, then pecked out on one of those machines that preceded the computer. He was a gentle person, with a lot of experience and learning which he wore inside rather than out. I urged him to write a memoir, and he was typically diffident, thinking — wrongly of course — that his life was of little interest. He eventually and tentatively produced a chapter about a period of his life when he worked as a journalist, and it was a gem. Typically self-effacing, of course, but wry, compassionate and witty as the man. And for all the angst he endured, in himself and others, he had a talent for humour and satire. He and his partner Penny Challis, an accomplished poet herself, lived a modest life in Golden Bay, with occasional forays into Nelson.”

When I am fit to speak of love the words will come
as easily as wheat puts forth its ample grain
or sunlight skips bright stones across a river.
My tongue thus far is husked and makes harsh sound
and shall not sing until I hear the growth of grain,
until I hear your name in all things blessed forever.

When I am fit to speak of love you may be past
your crest of youthful movement and your grace of line.
It will be late to praise you, late to flatter
myself by implication, finder of your eyes.
And there will be no need to find new ways
to ask or tell each other what’s the matter.

When I am fit to speak of love will be a day
of neither signs nor revelation. It might occur
some time when sleeping at my side I’ll feel you cry
and wake to hands that make your dream not true,
some moment when you’re ironing or touch your hair —
simple and warm as clothes fresh-folded on a chair.

People over the age of sixty-five should be
put to sleep.
For the winter.
No one will miss them or if they do
any awkward questions to their friends or family
are easily dealt with —
‘Hired a campervan’
‘North Queensland’
‘The World Cup’.

There will be no mention how
they might be training for
more serious things — e.g.
the Winter Olympics
practising the slalom of discreet avoidance
or bending the rules to allow
their coffins to luge-like do the downhill
head first.

They would be woken in the spring
as feisty and convincing as ever
telling how their absence
was novel, exciting, hassle-free and
went like a dream.

I remember clearly how things were
in the public service:
one thing was
how without asking
you got given a big blotter for your desk
but no ink.
It was a previous generation
that had the ink.

In my constant service of the public
I was safe.
People did not come into the office
unless invited and
even then did not deface the blotter
and if they were forming thoughts that way
had typically brought no ink.

I made no complaints.
Members of the public made complaints
and it was my job to deal with them
which was easy —
all you had to do was listen
listen carefully and then
tell them where to go.

Towards the end however
there were more complaints
and strange ones too —
‘The market and my feet and other people’s feet
are killing me.’
‘My glasses and hearing aid
have all iced up.’
‘The sun is not performing.’

These were what got to me
towards the end
and all that in good conscience we could do
in my department
was reassure them that we would enquire
what new resources now might fit their special case
and if indeed
there was something wrong with the sun
that needed fixing.

Nevertheless
amid all my frustration
I did not deface one blotter
leaving the public service in the end
with a clean record.

Part of me, sent on ahead, has
landed up in a museum,
where I do not belong,

behind a glass screen
shielding the text from dust or damp
and in the interests of transparency.

It is a poem for visitors to read
and the subject is death — another
reason for the protective glass.

The whole idea is interchange
and how the word
can meet the world.

that here he is
a founding member of the Koru Club
sitting at a table close to me.