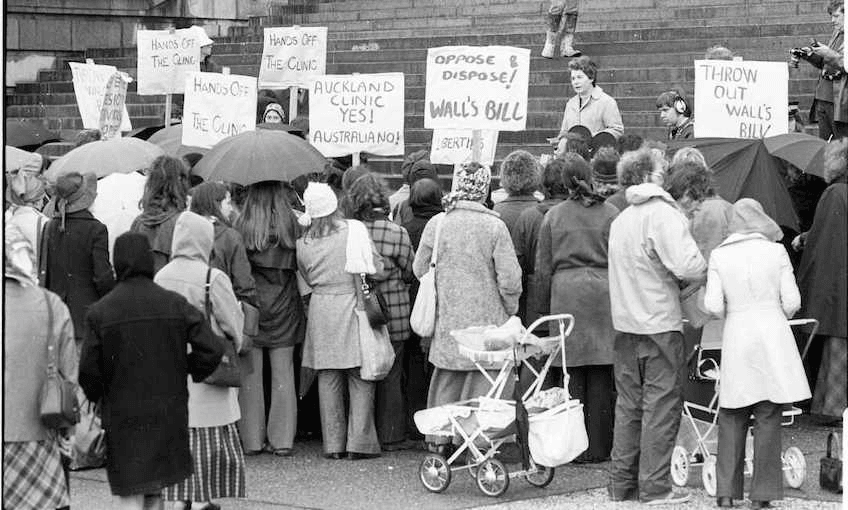 1974: women campaign on the steps of Parliament for the right to legal abortions. NZ’s first abortion clinic opened this same year (Photo: Evening Post via the Alexander Turnbull Library)

Loop Tracks: a novel about choice, consequence and male control

1974: women campaign on the steps of Parliament for the right to legal abortions. NZ’s first abortion clinic opened this same year (Photo: Evening Post via the Alexander Turnbull Library)

In Sue Orr’s last novel, The Party Line (Vintage, 2015), a rural community in the 1970s conspires to ignore that a fellow farmer is beating his wife. When she is finally free of him, the men close ranks to prevent her selling the farm to an outsider. Women cannot be allowed control of anything, not even their own bodies.

Orr returns to that theme in Loop Tracks, which opens in 1978 with 16-year-old Charlie on a Pan Am flight that will take her to Australia for an abortion. As Charlie tells us, May 1978 is not an ideal time for an unwanted pregnancy. New Zealand’s only abortion clinic, the Auckland Medical Aid Clinic, shut its doors the previous December, after the passing into law of the Contraception, Sterilisation and Abortion Act. Women now had to be assessed by two certifying consultants, who would only approve the procedure if they were convinced there’d be physical or psychological harm from continuing with the pregnancy. Foetal abnormality was not a ground on its own. Nor was rape.

The Auckland clinic did open again but not until August 1979. For 20 months in between, only women who had the means and time to travel to Australia could legally procure an abortion. A satirical song, written by the late Dr Erich Geiringer (and sung by him on the radio) ended with this verse: It’s a good old Kiwi custom, if you’ve missed your period, for the poor a knitting needle, for the rich a trip abroad. The 1978 Pan Am flight was real and remained stuck on the tarmac with everyone on board, for hours. During that wait, fictional Charlie makes a decision with “a brain yet to develop the parts that tether her to reality” and forfeits all say over the next part of her life.

When we meet her again in 2019, Charlie is cautious and restrained, her home not quite a safe space. She’s been made to share it, first with her son, Jim, who tracks down his birth mother when he’s eighteen. And then with Tommy, her grandson, whom Jim leaves with her when the boy is four years old. Jim’s brief time with Charlie is fraught. He is, in her words, a swaggering narcissist. A drug dealer, untrustworthy, intimidating. Charlie cannot know if adoption has damaged him or if he was born broken. She’ll never know whether they might, in another version of their lives, have been close.

Tommy is a second chance of sorts, but not without his own challenges. He’s probably on the autism spectrum, academically bright but socially awkward. In 2019, he is 18 and on the brink of both independence and his first relationship, with Jenna. Jenna has questions, about Tommy, his father, and Charlie. She is gentle but relentless. “This is about power, this conversation,” Charlie says. “We are poised, Jenna and I, on a playground seesaw … I hold my ground, refuse to let her bounce me high.”

But bounced Charlie is, jarred off the track she’s been on since Tommy’s arrival in her life, their familiar two-person groove. She’s forced to make room for Jenna and also, once again, Jim. Forced to reassess the story of her past, “the one I’ve been attached to my whole adult life”. And, as 2020 arrives, forced to deal with the added tensions provided by a global virus, a lock-down and a general election.

Loop tracks are short sections of sound, set to continuously repeat. In this novel, Orr explores the patterns we generate and perpetuate through our own choices, and the tunes we are forced to dance to, the larger political and environmental factors outside our control. This is where Orr’s genius lies – the novel provokes us, the readers, as well as the characters. These are subjects that polarise: abortion, adoption, women’s rights, crime, disease, governmental control. They trigger our most primal responses, fight, flight, freeze. This novel is a mirror as well as a lens, and how we judge Orr’s characters will say more about us than it does about them.

Charlie’s life has been an exercise in ceding control and attempting to wrest it back, by reducing the scope of her life until it feels manageable and safe, and by never looking too closely at her past. We might fault adult Charlie for her lack of courage, but Orr shows us that to do so would mean ignoring the vulnerable young girl, bearing sole responsibility for a situation created by male lawmakers who believed they knew best when it came to women’s reproductive rights. It would mean ignoring the traumatic effects of adoption, only now being acknowledged. It would mean ignoring that our children aren’t always who we hope they’ll be, and that we can’t always be the parents they need. Every relationship, every life, contains compromise and accommodation, mistakes and regret.

If there’s any message to take from this wonderful, complex and poignant novel, it’s that having the freedom to make choices isn’t all it’s cracked up to be. But we can make peace with our missteps and shortcomings, and not lay all the blame at our own feet.

Sue Orr will be in conversation with Catherine Robertson at Verb Wellington next month.