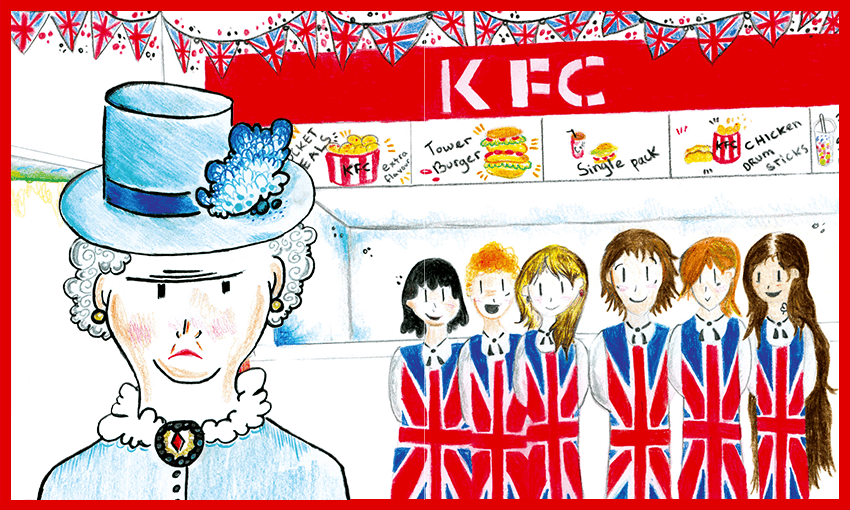 This short story is excerpted from The Jillion 2, a terrific new compendium of stories, poems and pictures by New Zealand children.

It was a dreary, rainy Wednesday in Auckland and the crew of Birkenhead KFC was winding down after another quiet day. Just as everyone was packing up, a worker named Lucy burst through the double doors with a hungry grin on her face and a twinkle in her eye.

All the employees stared at her in confusion. The manager stepped forward angrily, scanning Lucy with beady eyes. He could see she was holding an envelope, written in old-fashioned writing and addressed to him!

Before Lucy could say anything, the manager swiped the envelope out of her shaking hands. He turned his back on everyone to read it. All you could hear was the fryer sizzling away as if it was chatting to a friend.

At last, the manager swivelled around slowly and read the letter aloud:

I am the Queen of England and I demand to see your KFC in Birkenhead, North Shore, Auckland, New Zealand. I will be arriving on Friday at noon.

Her Royal Highness, Queen of England and the Commonwealth Nations, Elizabeth II

All of the workers either gasped or whispered to their colleagues in excited, nervous tones. “Well, what are you waiting for? Let’s get cracking!” Lucy exclaimed.

Izy, the youngest of all the workers, shouted, “We need new uniforms and a red carpet and decorations and … and …” She stopped to take a quick gulp of air and went straight back to lecturing all of the crew on what they needed to do for the Queen of England’s arrival.

Lucy interrupted gently. “She’s right! This is our chance to show the world that our KFC is the best.”

The staff looked at her for a stunned moment. Everybody erupted into cheering and clapping and they went to work on making the place beautiful.

When Friday came, the employees of Birkenhead KFC were still racing around frantically like a herd of scared zebras. Izy and Lucy had taken control of everything and now there were new uniforms, a red carpet and fancy decorations. Even the oil in the fryers had been changed!

At last, noon came. Everyone stood uncomfortably at the double doors, sneaking nervous peeks out of the tinted glass. At five past noon, the staff heard the unmistakable trumpet fanfare to herald the arrival of the Queen of England. She stepped gracefully on to the shiny red carpet. All of the staff bowed stiffly as the Queen sashayed forward with her head held high.

“Oh my!” she muttered in her posh accent.

The workers glanced at each other with pained looks but Lucy jumped up from her bow and guided the Queen away from her entourage to the sparkling clean kitchen. QE took a quick glance then turned around elegantly.

“Well,” she said flatly, “I was hoping to see the normal version of KFC, not the snazzed-up-just-because-the-Queen-is-coming version!”

Everyone either buried their pale faces in their hands or looked at the Queen sheepishly.

“Oh well, good day to you all. I will be back next year so mark your calendar!” the Queen barked in her I’m-so-rich-and-you’re-not English accent.

Then she and her entourage strutted out the tinted glass doors and disappeared. All of the crew breathed a sigh of relief.

The next day, a new letter arrived, adorned with the seal of the President of the United States…

Just wanted to stick my oar in and say The Jillion 2, which the story above appears in, is an exceptionally cool book. It’s a bright, green, hard-backed treasury of our kids’ voices and stories and art and it’s beautifully put together, and as you flick through you can practically picture each genius kid bent over their work, crayons all over the table, tongue poking out in concentration.

The range of art is huge. There are intricate black and white pencil sketches, dreamy watercolours, a felt-pen drawing of an eel so saturated in colour it looks like a stained-glass window (it was done by a six-year-old). There’s an excellent comic of nits clinging to a scalp for dear life. A coloured-pencil sketch of a snapper so realistic it could have flopped straight off the fish of New Zealand poster. Heaps of the illustrations here are way better than the ones in picture books illustrated by adults, I’m completely serious about that.

And the writing! There are flashes of proper brilliance here, moments that go beyond kids being accidentally cute or profound, and into holy moly, here comes a writer … there are so many, but to single one out, take the 14-stanza poem that was written by nine-year-old Hannah Chamberlin for the stuffed elephant at Tāmaki Paenga Hira Auckland War Memorial Museum.

but thieves stole your tail.

you got taken off your platform

They cut off your legs and trunk

so that you would fit through the door of the museum …

Bravo, Hannah, bravo to Annabel June Barlow and Ruby Santos-Jackson, who wrote and illustrated the story published above when they were 10, bravo to all the Jillioners, bravo to kids kicking arse. I mean bum. I mean bottom. Bravo.

The Jillion 2, by New Zealand’s young writers and artists (Toitoi Media Ltd, $45) is available from Unity Books Auckland and Wellington.