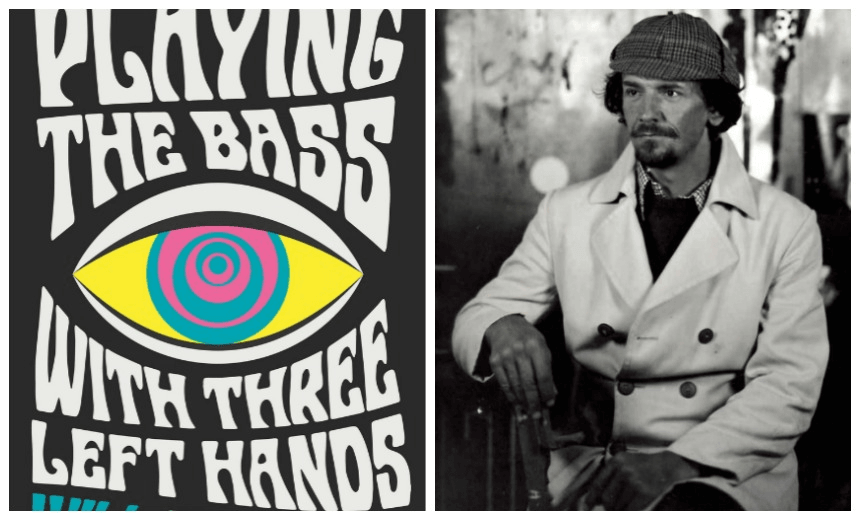 By Philip Matthews
Contributing writer
Made possible by

Music memoirs are so hot right now. Philip Matthews reads one of the best new books of the bunch – a hilarious account by Will Carruthers of Spacemen 3, a “drug parakeet” who ended up digging trenches.

Do you feel like there is a boom in music memoir writing right now? Long may it run. Locally, Nick Bollinger’s absorbing Goneville mapped out a 1970s that was bookended by Blerta and Toy Love, with Bollinger as the young acolyte and Rick Bryant as the stoned guru. Overseas, Faber Social in the UK has cornered a market of 40 or 50-something post-punk veterans. The readers, I mean, but maybe the artists too. So far that means industrial pioneer Cosey Fanni Tutti (Art Sex Music), rave pranksters The Justified Ancients of Mu Mu (2023), music journalist turned novelist David Keenan (the excellent This is Memorial Device) and rave non-prankster and gifted writer Moby (Porcelain) among others. Will Carruthers’s Playing the Bass With Three Left Hands is a hilarious rock-and-drugs memoir by someone who wasn’t one of the main two in 1980s cult act Spacemen 3.

The main two were Jason Pierce (aka J Spaceman), who went on to front Spiritualized and has specialised in a kind of heroin-chic gospel that leans pretty heavily on the third Velvet Underground album, and Peter Kember (aka Sonic Boom), whose solo work as Spectrum has been even more minimalist than his previous one-chord band. Their aesthetic as 60s garage and psych rock enthusiasts who had possibly nodded off and left the equipment and light show running was mostly out of step with the sober earnestness of mid-80s indie (Housemartins, Smiths) although they anticipated what the Stone Roses and Primal Scream did later. Carruthers played bass with them for a time.

According to this self-deprecating account, Carruthers did not even play on one of their best records, although he thought he did. The chapter on this in Carruthers’ book, which is strung together as a series of anecdotes, is titled “Elvis Died for Somebody’s Sins but not Mine”. It was the evening of August 19, 1988 at an arts centre in west London and Spacemen 3 were presenting “an evening of contemporary sitar music”. No one actually played the sitar but the group’s La Monte Young-style drone meant they sometimes sounded like they did. “It could have been billed, just as accurately, as an evening of contemporary hurdy-gurdy and bagpipe music, but that might have understandably scared some timid souls away,” Carruthers writes.

Just play one note, no fancy stuff, Kember told them on the drive down. As they waited to go on, everyone but Pierce got very, very stoned. Then they all sat down to play. The venue was also an arthouse cinema and at a couple of points during the recording of that show, released some years later as Dreamweapon, you can hear a voice come over the PA telling punters that a screening of Wings of Desire was about to start. It sounded like the voice of God when you were high. And the drone goes on and on and on, getting ever more hypnotic and transporting and absorbing. Let’s cross to Carruthers, writing from deep within that sound:

“Spectral shapes, motifs and melodic archetypes drift in and disappear, while the occasional mythical beast emerges from the ocean of drone, rising and submerging with barely a ripple. Imaginary colours pulse lysergically, and the drift of time is forgotten within the boundaries of limitless sound. How could so little mean so much? And what happened to all of those stupid and meaningless questions that seemed so important earlier?”

The punchline is that after 45 minutes of being really in the moment, Carruthers reaches over to turn off his amp and discovers he never even turned it on in the first place.

Playing the Bass with Three Left Hands is a psychedelic comedy, maybe an indie Withnail and I. It’s not cocaine and limos and private jets, it’s blocks of hash, cold flats in grim towns and vans. Other people’s drug stories are often like other people’s dreams – fascinating for them but boring for the rest of us. But Carruthers’ are funny, vivid, relatable and well told. He has probably recited them a few times and he says in his epilogue that he initially set out to write “a funny set of short stories drawn from nearly thirty years of playing in bands” before it partially shifted into an arguably more sellable Spacemen 3 memoir. He wrote most of it in two months in an attic room in Zagreb, while living on red wine and cheese sandwiches and getting over a painkiller habit (“That old taste is difficult to forget sometimes”). This background makes it sound melancholic, which it isn’t. He doesn’t take any of it too seriously and he lacks bitterness, which is the curse of the never-quite-made-it rock biography. He doesn’t get moralistic either. Mostly it’s about the stupid fun of being in your twenties, watching music or playing music and getting high.

“I was using intravenous drugs before I lost my virginity, which is a very strange set of priorities for a teenager to have,” he writes. There are lots of drugs, lots of rock and roll, and almost no sex. For all the drug abuse, it is almost innocent. When Kember turns Carruthers onto heroin, it’s upstairs at his mum’s house. Carruthers nods off and has a waking dream of a fridge full of cockroaches and a disembodied witch’s head floating around cackling. Just say no.

They drive from Rugby to Coventry to score heroin in tower blocks, listening to tapes of Suicide bootlegs. If this is sounding like real life Trainspotting, here is Carruthers expanding on that idea, and reminding us of the bleakness of life under Thatcher and the constant dread of nuclear annihilation and the general gloom of the 1980s and all of that, which were probably just really good excuses to get totally messed up: “Back then, the drug underworld seemed more honest to me, and at least the people weren’t as boring. At least they didn’t talk about how much their house was worth all the time or what their new sofa cost.”

The drugs do work, if you survive, and of course not everyone did. And the drugs were changing with the times. When Spacemen 3 turn up to play a gig in Chester, the young promoter offers them something new – ecstasy. Hey, why not? For some reason, they have been booked to play in a health spa. The gig is a riot and the sauna is trashed. Beauty and fitness equipment has been ripped from the walls, the jacuzzi is full of beer bottles and cigarette butts. Do you think I will get my deposit back, the promoter asks meekly. It was one of the best shows they played.

This touring life. Speed and pot, hash and acid. Carruthers takes some acid before a show in Leeds and this gives him his title: “I glanced over to make sure my hands were still there. Somehow, by virtue of the strobes, the passing fireballs, the smoke and the general peculiarity, I found I had been blessed with two extra left hands. This made perfect sense to me at the time. Three hands are better than none, right? The only problem was, the more I became aware of the three hands the more I began to wonder which of them was actually mine.”

By now, Spacemen 3 have split up and Carruthers is playing bass in Spiritualized. But that doesn’t last long. He quits and it’s only the early 90s. Something is coming around the corner, though. It’s something horrible. Here comes Britpop, a big, shiny, coked-up version of indie. The songs were anthemic rather than introverted, and not for losers or drop-outs. It makes perfect sense that when Oasis are playing their triumphant shows at Knebworth in 1996, Carruthers is broke and working on the gig, digging trenches for cables. Somewhere in the distance, the Gallaghers are driving around in little golf carts, pretending to have fun like they’re in A Hard Day’s Night or Help! Those phonies. Carruthers can see right through them: “When Oasis had started they were like a punk rock Slade, and they were pretty good. After they got a bit bigger someone made the mistake of telling them they were like the Beatles, and, because they were popular and putting lots of cocaine up their noses, they believed that maybe they might even be better than the Beatles, a little bit. I was basically unmoved by my proximity to glamour. I kept on digging.”

Playing the Bass with Three Left Hands by Will Carruthers (Faber Social, $37) is available at Unity Books.