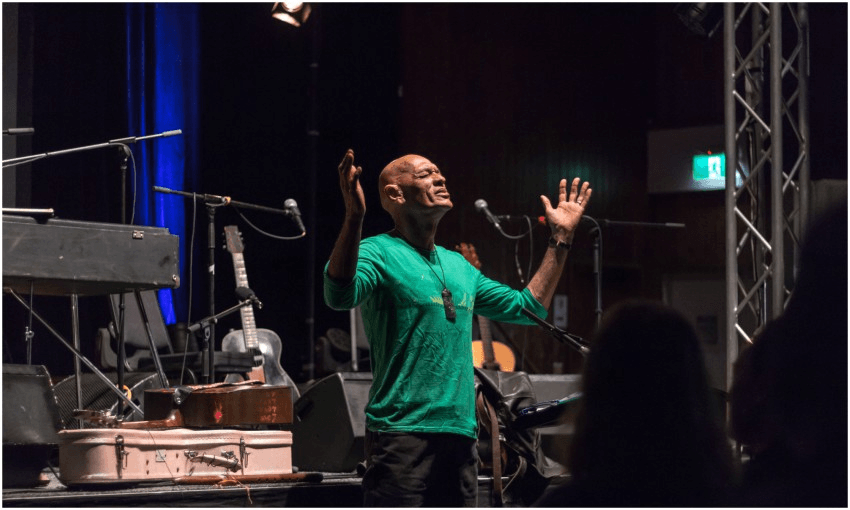 The oldest independent literary festival in Aotearoa is putting its massive back-catalogue online. Going West’s producer James Littlewood explains why – and what’s next.

February, 2020. We’d just pulled together a crack team and were poised to launch into full-blown planning when the virus hit and we went into lockdown. Suddenly, the future ceased to exist. It felt like standing on the bow of history, sailing into a thick fog on a moonless night near the edge of the world. We groped around for a few days, got “dunno” from everyone we spoke with, and thought: fuck it, let’s chuck it.

But we had an out, a cherished taonga that would light our way. Since the very first Going West festival in 1996, every word ever spoken into our microphones has been recorded to broadcast standard and looked after by our dear friends at Henderson Library, now part of Auckland Libraries. Spanning 25 years of festivals lasting several days each, that’s something like the thick end of 1000 hours of content, entirely dedicated to the wide and rich literary culture of Aotearoa.

We’d always wanted to do something with it: there’s no point in leaving it lying around, awaiting a graduate researcher to stumble along (but if that’s you, do get in touch). The lockdown provided the now-or-never moment. We rang the local board, let them know what we were doing, and put out the press release: GW2020 was going online, at least for the foreseeable future.

So now, we publish two or three of these items to our website every week, and it’s also available on Spotify, iTunes, Google Podcasts and various other such platforms. It’s vastly more work than we anticipated, mainly because it’s so darn interesting. Especially for a baby like me who’s only been involved for the last few years.

We started at the beginning: there’s the very first session at our very first festival back in 1996: Breathing Words. It’s chilling to hear the aural language of Bernard Makoare’s taonga pūoro play in, out and alongside of the poetry of Dr Ngahuia Te Awekotuku and Robert Sullivan.

More recently, Moana Maniapoto is there with the concert she gave in 2018 with techno producer Paddy Free, as the duo TŪ. Maniapoto’s been at several Going West festivals, not just as a singer, but also as an interviewer. In 2017 she talked with Dame Anne Salmond about the book Salmond had just published, Tears of Rangi: Experiments Across Worlds. We’re hoping to get that one up in the coming weeks.

Also in the musical line, in 2017 we were blessed with the Wellington jazz ensemble Small Holes in the Silence, who set some of the best-loved poems of Aotearoa to music, performing them both with Hannah Griffin’s crystal clear jazz singing, as well as Bill Manhire’s spoken recitals. It’s a sublime concert, beautifully captured.

The great historian Michael King was a regular Going Westy in the early years. Some of the older audio files have some technicalities to resolve to be made public-facing, but we’re thrilled to have his 1999 oration: Reflections and Recollections of a White Native, the subtitle of the reissue of his classic volume Being Pākehā. This thorough and searching analysis of Pākehā cultural identity is in equal parts contentious, provocative and witty.

King takes advantage of the live discussion format to dial up his own lived experience, using personal anecdotes that are both funny and poignant, to provide invaluable context for his large, complex and vital theme. Whatever your view, he’s impossible to ignore.

One last highlight I need to point to is Rod Oram’s oration in 2017. Oram’s justifiably well known as a business and economics reporter. But here, he is far away from all of that. This piece is richly poetic, and infused with a sonic soundscape produced by his daughter, Celeste Oram, herself an accomplished composer. Drawing on diverse audio and archival sources, Rod traces an ecological history of Tāmaki Makaurau that is almost cosmic in scope.

We’ve probably got enough in the tank to keep posting these recordings until some time in September. Funnily enough, that’s when we usually have our live event.

And, just on that, while it’s far too early and quite irresponsible of me to say so, what the hell, here goes: chances are, we’ll be back with the live event later in the year. Look out for us somewhere near October. We won’t be the same. But we’ll be there.