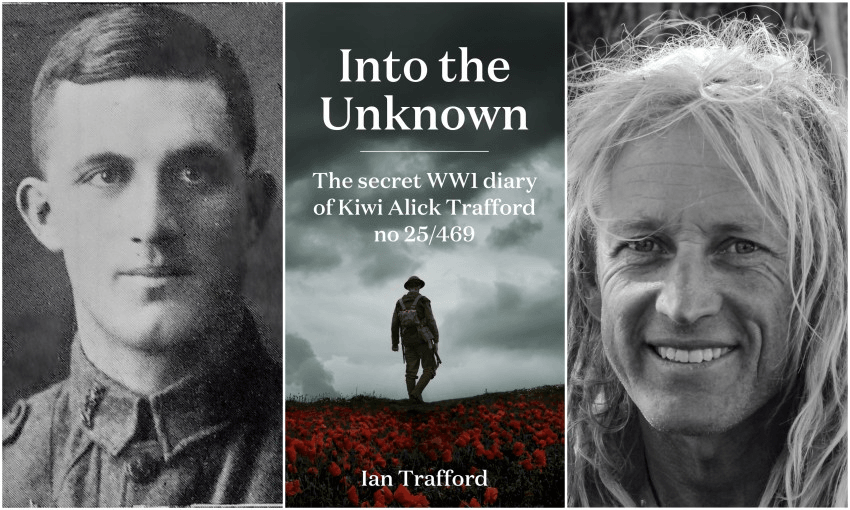 Alick (left) and Ian Trafford, and the book that’s a bit of both of them (Photos: Supplied)

By Ian Trafford
Guest writer
Made possible by

Alick (left) and Ian Trafford, and the book that’s a bit of both of them (Photos: Supplied)

Nelson writer and photographer Ian Trafford on the fraught origins of his new book, Into the Unknown.

Alick survived World War I by the skin of his teeth, and thus so did his illicit diaries, and now my book.

I called my grandfather Papa as a child, and by the time I was born into his family, he was retired and lived not more than a 10-minute drive from me. Ours was not a cuppa-tea-and-read-a-book-upon-my-knee kind of relationship. By the time I was around 10, I knew he had been to war — something I only knew about from reading Commando comics where heroism was the theme and the goodies always won and nobody seemed to suffer.

Each Anzac Day in Te Karaka, I remember Alick togged up in a civilian suit with a modest row of medals on his chest, standing forward of me in solidarity with other solemn men. I could not understand why the Last Post bugle call made me choke up, nor could I really grasp that this old man had been a youthful soldier and had reluctantly befriended Death all those years ago.

Sometime during his retirement, Alick sent my father to his ceiling cavity to retrieve a secret package for burning – the diaries of his private war. No son could resist a peek into his father’s hidden past. They never reached the fire.

Alick’s deeply hidden mysteries began to weave a moving tale, too personal to intrude upon but too good to be destroyed. They would become hallowed documents, revered and often read. My father Harvey became kaitiaki of the family secrets.

Four decades later, as I studied the diaries, moral dilemmas shouted from almost every page – how to honour this enigma of a man? Alick gave his all but he took to his diary sometimes as a heretic. He was always honest and immediate, often very personal about his mates – many of whom were blown to pieces metres away from him – and his lady loves. What would my family say?

Alick Trafford’s mates remembered “Traff” as a tough bastard, but a man too sensitive for war. He returned to Gisborne physically intact, but with a scar and souvenir shard of Fritz’s rifle grenade steel deep in his upper humerus. He also brought back well-concealed shell-shock baggage that would unpack during chapters of his New Zealand back-country farmer life.

In his own words, upon confession of the diaries’ existence, his story was “dynamite”.

My father’s feeling for my grandfather’s story started it all for me. He was inquisitive and paid typists to transcribe the original cursive. I wrote some pieces for the school magazine when I was a student at Waikohu College, Te Karaka. My proud father immediately thought I was a writer, just like he thought I was an All Black when I played rugby. When I left home for teacher’s college I asked for copies of the diary. He looked at me as if to say it was my quest. Country men need no long sentences to convey emotion.

As my social conscience grew I came to understand the heretic my grandfather was. His was a vivid and sad story: the actual truth, no punches pulled, no lies or propaganda, a record of exactly what unfolded in front of him. No censorship. I read books of heroic war exploits and they never really gelled for me. I felt I had to write this book – his book – to show the un-great war and the fact that most men were just ordinary, tough survivors.

Soon after I began to write I knew I had to face a trial – to run the project past my dear aunty, Minty Henderson, Alick’s sole surviving daughter, now 91. She had experienced living with a dad who, at times, showed serious signs of damage, especially in her teens when World War II broke out. She said to me: “On his lowest nights, he marched off to the hay barn to sleep like a soldier once again.”

Minty’s attitude was that this story had to come into the light, and “I can choose which chapters I wish to read”. It was both a welcome mandate and a heavy family burden.

Just over two years ago my writing journey began. I already had the plot – Alick’s detailed observations and descriptions saw to that. I re-organised his diary entries, and a few saved letters, into a logical and alive narrative. I changed the tense to the present to make it more immediate. I kept his strong voice but also used my own words. I could say we both wrote this story, as if he were leaning over my shoulder.

Some research was done years ago and is held at the Alexander Turnbull Library; most helpful for me. But I had to crack his codes as well. For example, when he talked of soldiers on London leave, visiting an address at Russell Square, I had to research what this was – and discovered it was the venereal disease prevention clinic. Then I used the correct moniker.

The process took me to a darkness:

“In front of us, looming as the great giant, is Passchendaele, a hill that has cost us many lives. Hundreds of unburied corpses are spread all about, floating in flooded craters, trapped in mud, or blown into unrecognisable pieces. The bones of dead men show clearly, picked over by rats and washed white by the rain. This time it appears we have not had the time to bury our own. Not a sign of nature remains. Every tree lies uprooted by shellfire.

During the night, old Fritz opens up in reality, walloping in his 5.9s and whizz-bangs. His range is right on us and I cannot imagine anyone will be left alive by the morning. It is solid on the nerves. My ears have gone. I have never been subjected to such direct shellfire. I have the wind up.

The day passes slowly with the thought of another night in our minds. In such an exposed position, we take heavy losses. Dead and wounded men mount up beside us. I am much in need of our two rum rations. It warms a man up.

In the night, it rains and blows while old Fritz shells us heavily. At some stage, a 5.9 comes in right on target, without warning. Our earth home explodes around us. I am suddenly suffocating under the heavy pressure of mud, completely buried by the blast. I think my time has come. In a last struggle to push out of this tomb, my thrashing around gets my head out and I scrape the mud off my face for a breath of air.

I have come off best of all. I set to with my spade. We drag two shocked men out alive. The third man, poor Evans, is limp, killed by the percussion. I bury him alongside.

Early the next evening, we hear the joyful noise of men ploughing through the mud. The 17th Ruahines arrive to relieve us. Only a dozen men of my platoon are left.”

I was most relieved when Alick was at rest camp or on leave. Mercifully for me, and for the reader, on his equally frank adventures away from the front, Alick was determined to snatch any happiness on offer. Sometimes he even soared. In Belgium, post-war:

“Parting is hard. I have a last lovely kiss with Eugenie and fall in with my company. A soldier on the move is not able to indulge in the idiosyncrasies of love and its after-effects. I shall ever remember my time here. I leave this country with joy in my heart.”

There is a chapter called The English Girls. Again, I had the task of telling Papa’s secrets.

“The Rifle Brigade put on a dance with our band at the Milford Village Green. All the Diggers and lassies attend, not to mention the WAACs. A Digger is knocked out cold by a high-kicking girl in the very first dance. Things get a bit stomping and rough for a time, but it is a great success with lots of affectionate scenes …

“I have the terrible job of witness at a hearing for men who broke evening curfew. Our lives have been greatly condensed during this war business. It would be no trouble to turn a blind eye to men overdue from their lady friends. The army has more to worry about winning this war than men yearning for the comfort of women.”

Wartime, it seems, changes everyone.

Into the Unknown: The secret WW1 diary of Kiwi Alick Trafford no 25/469, by Ian Trafford (Penguin, $38) is available from Unity Books Wellington and Auckland.