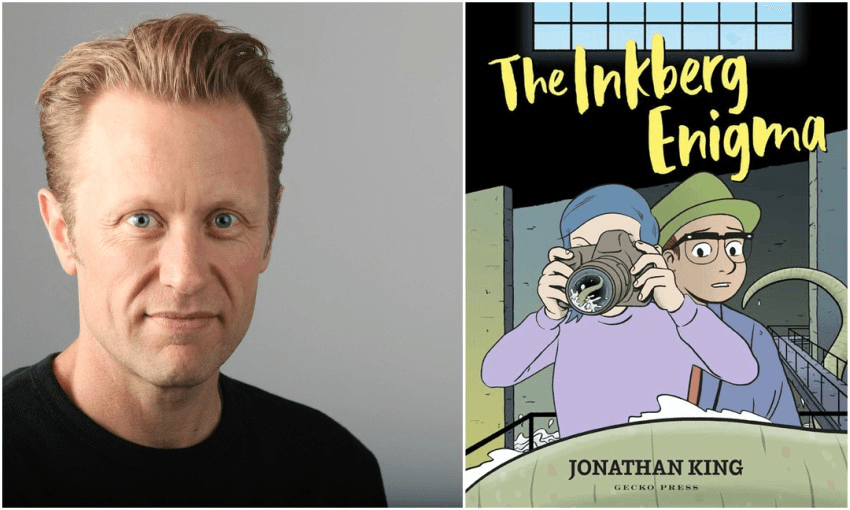 Toby Morris and his kids review a cool new comic

In a sleepy fishing town, there’s something strange going on behind the scenes. Luckily two plucky kids called Miro and Zia are here to investigate. It’s The Inkberg Enigma, a new graphic novel for young readers, by Jonathan King.

In look and feel, the instant comparison you might make is Herge’s Tintin, or the similarly retro-adventure vibes of Yves Chaland. It’s a classic euro-style album in clean lines and flat colours. Genre-wise it’s very classic too: a mix of mystery and adventure, and a tiny bit of scariness, in a relatively timeless small-town setting. Tintin in Lyttelton, perhaps.

But the closer to home comparison is the classic New Zealand kids’ comic Terry Teo. At times, in a nice way, the heroes Miro and Zia reminded me of Terry and his sister Polly – getting themselves in over their heads in the secret world of adults. Along with a bunch of other old and new NZ comic artists, Terry’s creator Bob Kerr gets a subtle shout-out in the clever end-papers map which serves as a kind of whakapapa of the comic.

The story is fantastic – there’s a town with secrets, sea creatures, an overbearing mayor, and a whiff of the supernatural in the air. King builds a great world and the story is pacy with some excellent twists and turns. People always say “Lovecraftian” when there are tentacles involved. I’ve never read Lovecraft, so I’ll just say “has tentacles in it”.

King is also a film director, known for features like the horror/comedy Black Sheep, so it’s interesting to see how he adapts when the camera and the sets and costumes and the actors’ performances are all at the whim of his pen. Without the practical and financial restraints of film making, I thought he’d be able to let loose a bit, so I was slightly surprised that the book is quite restrained in its camera angles, compositions and palette. But I’m really nitpicking here. Overall it looks great.

Books like this are an incredible amount of work, and I’m curious to know if this was more work over a longer period of time than making a feature film. I suspect it might have been. I’ll cheer any time New Zealand publishers are releasing comics or graphic novels or whatever people want to call them to make them respectable these days – and it’s even cooler to see Gecko Press having faith in a big project like this for kids. I hope the book does well, for several reasons, including that I hope it inspires other publishers to take a similar punt on local comic artists too – we’re out here!

But I’m getting off track. The point is: kids will love this. I read it together with my two sons, and they got totally dramatically swept up in it. So I thought I’d let them have the final say.

It had the best twist at the end, and I liked how they did the town.

Miro was cool. He really liked books, it was really funny. It really came in handy. Zia was really cool with her photos.

It wasn’t too scary. It was really funny when Miro was scared but Zia said “They’re right behind you” and Miro jumped and he was like “Hey, there’s nothing behind me!”

I like how one was more of a safe guy, and the other was really adventurous.

I think it’s a mystery. You don’t know what the creature-y thing is, and you don’t know about the castle – like, is it just like a normal house with lots of rooms, or is like a really fancy palace?

I would say it’s good for kids. It had some real good surprises.

I thought it was SO good. It’s a mystery … adventure … a bit of a mix. It hooked me in and I wanted to keep reading.

It seemed like New Zealand. The way that it was drawn was really cool. Maybe similar to Hilda, or Tintin. Maybe Tintin, I dunno.

The bit that was probably the scariest was when they had to go across the rooftop in the building.

I’d say to other kids “Oh I know this really cool book called Inkberg, I think you’d like it. It’s really good, I liked it”. I think it’s quite an all-age book.

I hope they make more books about Miro and Zia, because there could be more adventures. Like, maybe they have to go to Antarctica. That would be a good quest.

The Inkberg Enigma, by Jonathan King (Gecko Press, $29.99) is available from Unity Books Wellington and Auckland.