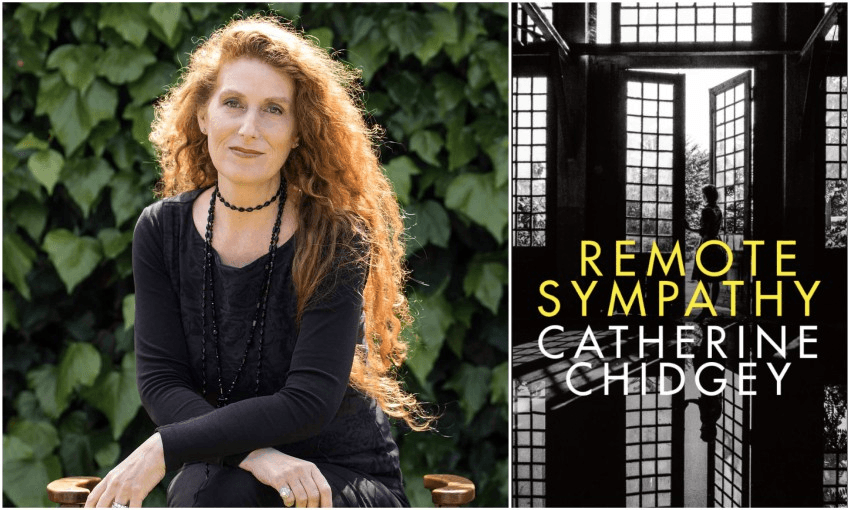 The terrible fear of being a bystander: a review of Remote Sympathy

By Elizabeth Heritage
Guest writer
Made possible by

Every time I read a pukapuka set in Nazi times I become obsessed with the question: what would I have done if I had been there? I remember studying Nazi Germany in high school and perseverating on the idea that the ordinary people of Germany could have stopped it all from happening if they had just banded together. At 16, I could not imagine turning my eyes away. I knew for certain: I would have seen through the Nazi propaganda and fought them tooth and nail (probably in a smart trenchcoat like Michelle in ‘Allo ‘Allo!). Now, at 40, I am uneasily not so sure.

Kaituhi Pākehā Catherine Chidgey’s Remote Sympathy is a pakimaero set mostly in Buchenwald, in and around a Nazi labour camp. The main point-of-view characters are the camp administrator Dietrich Hahn, his wife Greta Hahn, the semi-Jewish Dr Lenard Weber, and “the private reflections of one thousand citizens of Weimar”. As I read I scanned them all closely, looking to see who I would be in their situation, and how they justified themselves.

Dietrich’s narrative, told in retrospect after the end of the war, is presented as transcripts of taped interviews conducted by his US captors in 1954. In her author’s note, Chidgey says Dietrich is “loosely based” on the real-life Otto Barnewald, and that she has “tried to provide as realistic a representation as possible”. Dietrich certainly provides a parade of self-justification that feels very true to life: “nobody discussed with me the quartering of prisoners in tunnels, by the way, and I saw no evidence of it.” Quoting technicality after technicality, he explains how he was actually doing a pretty good job under difficult circumstances: “I was proud of my impeccable books”. It sounds outrageous – it is outrageous – but his blinkered self-exculpation is also entirely believable.

Greta’s narrative is called “the imaginary diary of Frau Greta Hahn”. (The use of “imaginary” threw me, because it’s not like the rest of the pakimaero isn’t also a work of imagination. However.) As the wife of the camp administrator, she is living on the fruits of slave labour; a fact she continually chooses not to acknowledge. Greta struck me in a lot of ways as an example of the kind of white feminism I am trying to rid myself of. As a woman living in a misogynistic world she is oppressed, but she allows this relative powerlessness to blind her to the ways in which she is participating in the oppression of others.

Greta goes to immense mental effort to refuse to know what is happening at the camp. Another Nazi housewife with whom she becomes friends casually mentions the torture of prisoners and Greta just goes a bit blank and changes the topic of conversation. She deliberately avoids curiosity and even common sense: “I decided not to look too closely.” Others collude in her ignorance: “You don’t need to think about things like that, Frau Hahn.” Whenever she comes up against some physical evidence of the atrocities happening on her doorstep she simply removes either it or herself from the scene.

Lenard’s narratives are written as letters to his daughter in 1946. It is his voice that begins and ends Remote Sympathy, and it is through his eyes that we see the Buchenwald labour camp from a prisoner’s point of view. But by the time we got to the first-person descriptions of the hunger, cold, pain, exhaustion, humiliation and fear, about 200 pages in, I found that – as foretold by the title – my sympathy had become rather remote.

I tried to figure out why. Perhaps it is because Lenard’s letters are written in 1946, so we know right from the beginning of the pukapuka that he survives the war, thus lessening the dramatic tension. Perhaps it is because I have been exposed to various depictions of the Nazi death camps for 20-odd years and there’s an element of desensitisation in play. Perhaps it has something to do with Chidgey’s prose style, which tends towards the artful rather than the visceral: “at night the past ran its drowned fingers across my cheek”. Although I felt sorry for Lenard, I did not identify with him. I realised, as I considered this more closely, that I’ve never once thought of myself as the kind of person who might end up as a prisoner. I think it is because I am white. Hmm.

Shortly after the end of the war, US troops bring the citizens of Weimar inside the Buchenwald camp to force them to witness the atrocities they have tolerated on their doorstep. But even then, they refuse to acknowledge the truth. “No, we said. No. This was not real. Because we could not believe our eyes … yes, there were ashes and bones in the ovens, which proved nothing in particular … We held up our hands for shade, as if the dead glared stronger than the sun, as if it hurt to look.”

I experience pukapuka about the Nazis as a judgement on me personally, and I think that’s because I hear them whisper to me: this could happen again. This could be you. I feel it as an implicit challenge to my civic-self – a reminder that these are the lengths to which a state founded on and fully committed to white supremacy can go.

I know that times have changed and that Aotearoa is not Germany. But I am uneasily aware that we still have some of the ingredients of another Nazi state: racism, poverty, prejudice, inequality, incarceration, sophisticated systems for delivering propaganda. We still abide by the basic idea that some people deserve to have their human rights respected and others do not. (And yes, I am aware that, technically, human rights as legal formulations were not invented until after World War Two. You know what I mean.) More specifically, to read Remote Sympathy in 2020 is to read it within the context of the rise of powerful white supremacists around the world, made more dangerous by the global crisis of covid. It genuinely feels like history is repeating right now.

And it was at this point in writing my arotake that the 2020 general election here in Aotearoa happened: a landslide victory for Labour. I remember that when Trump was elected I was reviewing Frantumaglia by Elena Ferrante and the horror of that election result knocked my reading sideways. This felt like a balancing-out of that experience. I didn’t realise until I saw the voting infographics go red how deeply I had been fearing that New Zealanders, like so many others, would turn in our pain and fear to right-wing extremists. As the votes were counted I felt the grip Remote Sympathy had on my brain loosen. The warning whispers subsided.

Well. He pukapuka arotake tēnei. You’re waiting for me to pass judgement on this pukapuka on its merits as a pakimaero so that you can determine whether you might like to spend your moni and tāima reading it. Here we go.

Remote Sympathy is beautifully written and much easier to read than I was expecting, given its subject matter. Chidgey’s previous pukapuka have won multiple prestigious awards; she is a kaituhi of undoubted skill who has also put in the mahi. The historical context of Remote Sympathy feels real, and wears the weight of Chidgey’s years of detailed research lightly. If you have the desire and psychological stamina to read 500-plus pages about the Nazis, this pakimaero would be an excellent choice.

You’re not me so you might not spend the whole pukapuka freaking out about the ways in which you personally have been colluding with white supremacy and what this might mean for the fate of our nation. But I would say this: even in the relief of our 2020 election result (assuming you are relieved), please don’t take our relative good fortune for granted. The reason that pakimaero about the Nazis are still being published in Aotearoa in 2020 is that we have not yet broken ties with them. They haunt our collective imagination because, as a colonial state, we share ideological whakapapa. Building a better future is going to take mahi from every single one of our civic-selves. I might get myself that trenchcoat after all.