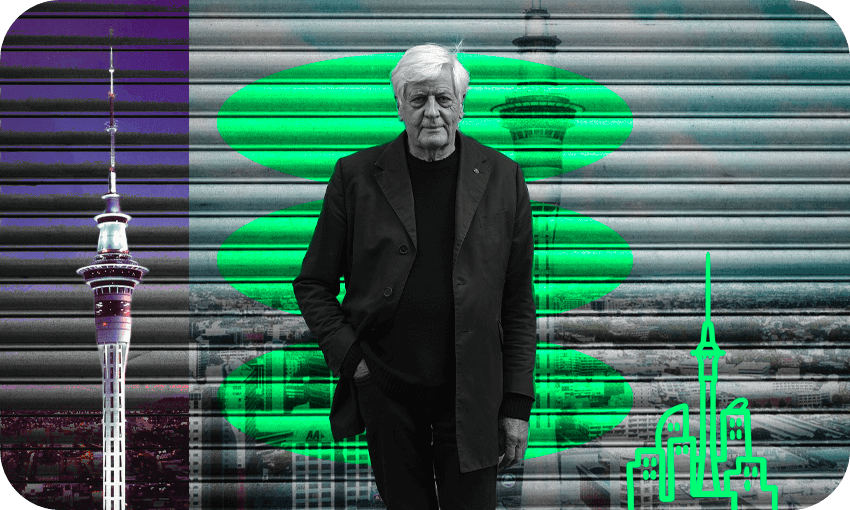 Gordon Moller came up with the idea for the Sky Tower drinking wine on a flight back from Toronto. Photos: Supplied; additional treatment: Tina Tiller

Gordon Moller came up with the idea for the Sky Tower drinking wine on a flight back from Toronto. Photos: Supplied; additional treatment: Tina Tiller

Architect Gordon Moller tells Chris Schulz how he created the building that rose to define a city.

For more business stories in your inbox every Tuesday, sign up to our newsletter Stocktake.

He’d been to Las Vegas to visit the casinos, New York to climb the World Trade Centre, and Toronto to scale the CN Tower. In the early 90s, Auckland-based architect Gordon Moller was on a worldwide research trip taking in the biggest buildings he could find to help inform his own grand designs: a casino, restaurant and hotel complex based in the centre of Auckland, along with a “tower” first mooted for Symonds Street then moved after a land swap with Auckland Council.

Moller was on the plane back home when a thought came to him. “We were having a glass of wine. Someone said to me, ‘What’s this tower going to look like?’ We hadn’t even designed the thing.” He pulled out a sketch pad and a clutch pencil, then he realised: it should look like the thing he was holding in his hand. “I said, ‘I reckon it’s got to be elegant and beautiful and reach for the sky.’” With that mid-air sketch drawn by a tipsy architect clutching a mechanical pencil, the Sky Tower was born.

Twenty-five years on from finishing his masterpiece, Moller is sitting in his Auckland office surrounded by photos of it. His favourite is the one of him smiling and waving proudly from the top of the needle (the exact thing I couldn’t do). After a complicated construction process that took years from design to inception, Moller was persuaded to climb to the top by then chief executive of Sky City, Evan Davies. “He said, ‘We’re going to the top.’ I said, ‘Yeah!’ So we did.”

Take a glance out of his office window and you’ll see it’s not just photos that nod to Moller’s grandest achievement. From his Karangahape Road suite, he has a full view of his Sky Tower, an instantly identifiable icon that’s come to define Tāmaki Makaurau and all the city has to offer. It first opened its doors to visitors on August 3, 1997 – almost 25 years ago to the day. That makes it the perfect time to ask Moller how it all went down – or up, as it is in this case.

(This interview has been edited and condensed for clarity.)

The Spinoff: How did you end up designing the Sky Tower? Had you designed anything like it before?

Gordon Moller: No. Sky City had decided to build the project on Symonds Street. They wanted to put a big shopping centre up there. They’d gotten this Canadian firm of architects to design it, but it was within a view shaft (particular views of Auckland that can’t be built over). Brierley Investments said, “You need to help us. We’re going to appeal. We’ve been turned down.” I said, “You’re never going to get the tower there. You can’t go through view shafts. They’re sacrosanct.” They went to appeal. The town planning court said, “No, we’re not going to support it, but we think you’ve got a really interesting project that Auckland would really benefit from.” At the same time, the casino was mooted. The government had about six different applicants. Sky City decided to bid for it. They switched their scheme from a shopping centre to a casino. The council said, ‘We’ve got this corner site on Federal Street and Hobson. Why don’t we do a land swap?’ That’s what happened.

Is that when you sketched up the first designs for the Sky Tower?

I was given a weekend to tell them whether they could fit their scheme on that site. I had to do a very rapid concept. That’s what architects do – you get asked things like that. They said they wanted a tower. The tower wasn’t part of the casino application. It was separate. I proved to them that it was possible to put what they wanted – hotel, restaurant, casino, tower – on that site. I showed them they could. It was the beginning of 1993. We designed the casino and the tower at that time.

What were your ideas? What was inspiring you? What look were you going for?

I was familiar with towers around the world. I… thought a lot of them were pretty ugly. My thought was, if you’re going to create a tower, it’s a pole or pou… I felt it had to be beautiful.

Was there fear or worry around it? Did you wonder if this would ever happen?

This is much bigger than a house.

Yeah sure. I was quite confident in it. We’d done quite significant projects in Wellington, the Civic Centre … a lot of commercial work. We were confident in our ability to put buildings together. But no, we hadn’t done a tower.

You’re not sitting there thinking, “Holy shit, if this fails everyone’s going to see it?”

I knew it was a major. You have to have confidence. Like anybody, you’re always challenging yourself as to whether you’re trying hard enough. Sometimes you’ll realise it’s not as good as it should be, so you try harder.

You can’t look at a photo of Auckland now without seeing the Sky Tower. It’s an instantly recognisable landmark. How does it feel to have affected a city’s skyline so dramatically?

I’m really thrilled with it. I’m really proud of it. We got a lot of shit when it was being built.

People didn’t like the idea of the tower. People hated it. People thought it looked like a sewer pipe. [They said] it was intruding on the landscape. My view was, you had a tower you could go up and understand Auckland’s volcanic cones. Also it’s a good beacon. It gives you a lot of orientation.

Did you get asked to design any more giant towers?

We did one in Macau. It’s taller than [the Sky Tower]. We designed another one in China too, but that never went ahead.

What role does the Sky Tower play in your life now?

Not much. We’re still doing the odd thing for Sky City. I’m still working. I still get up at 5am and start drawing. It’s a love for it and I’ve got a strong work ethic which I got from my parents. Architecture does take a huge amount of time. What you’re doing is you’re dreaming up what you believe is the right thing for the client, the community, the environment. You have a social responsibility to build something as best you can.

The Sky Tower’s life span is said to be 100 years. What happens then?

Most buildings can be refurbished. There’s a tendency to demolish old buildings, which I think is crazy. It’s an incredibly strong shaft.