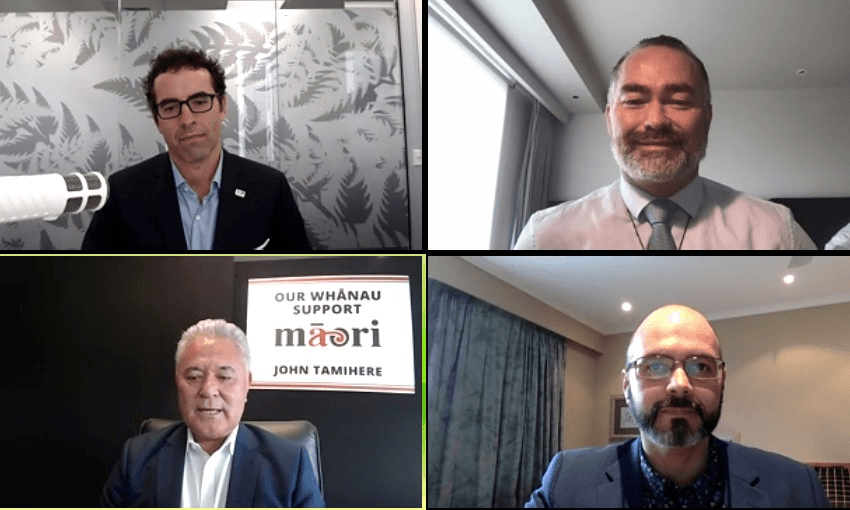 We’ve heard at length from the five major parties. But what policies do the minor parties have to support businesses and rebuild the economy from the Covid-19 rubble?

Geoff Simmons of TOP, Vernon Tava of Sustainable NZ, Billy Te Kahika Jnr of Advance NZ and John Tamihere of the Māori Party today addressed New Zealand’s business community through an online zoom webinar, with each sharing their party’s plans to solve the worst economic shock in a generation.

Here’s what they had to say.

How would each party support business and rebuild the economy?

Beginning with karakia, Māori Party co-leader John Tamihere said his party would be aiming for “a total review and recalibration” of the moral compass of the way New Zealand society conducts itself, with the environment and the wellbeing of Māori and those in poverty at the top of the list.

“When you do well, you don’t pull the ladder up on fellow kiwis and leave them on struggle street,” he said.

Specifically this would be done through an “affirmative procurement programme,” that would see more Māori taking advantage of the opportunities only available to the “new growing elite.”

“What we’ve got to do is break ourselves out and to do that we will need the support of well-meaning non-Maori.”

The policy would focus on involving Māori interests in housing construction and infrastructure projects to create more jobs and training opportunities, implementing a capital gains tax on secondary houses, as well as investing and transitioning to a greener economy.

TOP leader Geoff Simmons outlined four priorities that his party would focus on, the first being a tax levied on housing in order to incentivise other forms of investment.

The second would be encouraging more people into work by implementing a $250-a-week Universal Basic Income, which Simmons said would rectify the punitive effect of the current model which removes welfare payments as soon as people begin working. He said it would be especially beneficial for those in the gig economy and those in temporary or seasonal work.

TOP’s final priority would be to change the way the government selects infrastructure projects by implementing a sound cost-benefit analysis and business case for each potential project.

“We need to invest on the basis of business cases. What is going to give the best return on investment. And that needs to include particularly a view towards moving towards a low carbon economy.”

Sustainable NZ Party leader Vernon Tava began by pitching his party as one that places sustainability and the environment at the centre of government, and as a balanced alternative to the Green Party.

He acknowledged that as a very minor party it would have little leverage as part of the government, so he pushed a policy regime heavily focused on innovation to grow productivity and establish more synergy between business, academia and government. This, he said, was underpinned by studies of small advanced economies, including Israel, Singapore, Finland, Ireland which have been successful in fostering and commercialising innovation.

The party would establish a New Zealand innovation agency to oversee four main areas around startup and business development at a cost of $100 million annually, with a $170 million annual budget spread across research and development grants.

It would also establish technology transfer organisations within universities to encourage collaboration and commercialisation, and a number of venture capital funds.

Advance NZ co-leader Billy Te Kahika Jnr said that while the health of the land was his top priority, it should never be at the expense of logic and a sensible approach to business. He said his party would work with businesses to mitigate the risks to the environment, improve productivity and prioritise the opening of the borders to reignite tourism.

“We need to take a risk based approach to Covid-19 so it doesn’t destroy our economy.”

Te Kahika Jnr advocated for unlocking the Māori economy by using unused Māori land for productivity, and repealing the RMA and mitigating what he called the land strangulation by the green sustainable attack.

How would each party pay back the debt of the Covid-19 recovery?

While TOP’s Simmons said the public sector debt needed to be addressed, it was not inherently a bad thing as the government could currently borrow at very low rates.

“Right now the issue isn’t one of spending, it’s one of quality of spending.”

He said TOP would focus on investing in quality projects with the best return on investment, analysed through comprehensive business cases.

Tava of Sustainable NZ party agreed that debt wasn’t necessarily a bad thing in a business sense as the infrastructure assets that are being funded will be in place for decades and can be paid off across multiple generations.

He said his party supported the repeal and replacement of the RMA in order to stimulate investment and build more houses in order to bring prices down.

Te Kahika Jnr said that growing productivity was a crucial issue but there were a number of problematic taxes standing in the way, including the 40% inheritance tax which his party would remove.

While he didn’t go into specifics, he alluded to changing clause 26G of the Public Finance Act and establishing a form of shared equity arrangement into home ownership that would help extract people from the cycle of poverty.

“[We need to] not penalise people through taxation, but rather incentivise everybody to get off their butts and working again.”

How would each party manage the border?

John Tamihere acknowledged that rather than considering an elimination at all cost approach, there needed to be a more targeted social economic approach to containment that would insulate Māori, Pasifika, elders and those with pre-existing health conditions from potential outbreaks.

While TOP’s Simmons said an independent public health commission needed to be established in order to handle potential outbreaks in the future, New Zealand’s position as a safe environment presented a number of commercial opportunities.

“We really have an opportunity to target that high-end market, both in terms of immigration, and in terms of pivoting our tourism industry away from a volume approach towards much more of a high value approach.”

He said the money from charging visitors a premium could then be used to finance up-scaling capacity at the border. It was also essential that New Zealand’s quarantine facilities be moved away from Auckland.

“We need to urgently be thinking about setting up facilities in another part of the country where… if it [Covid] did sneak through it doesn’t result in shutting down our largest city.”

Billy Te Kahika Jnr said the borders needed to be opened in a safe and managed way, but agreed the facilities needed to be moved to the provinces where they might bring extra revenue.

Finally, while Tava said Sustainable NZ had no specific border policy, he said that it was crucial for politicians to follow the best scientific advice. “It’s the kind of thing where you need to work with the best data and expert advice that you have at the precise time that you’re dealing with it.”