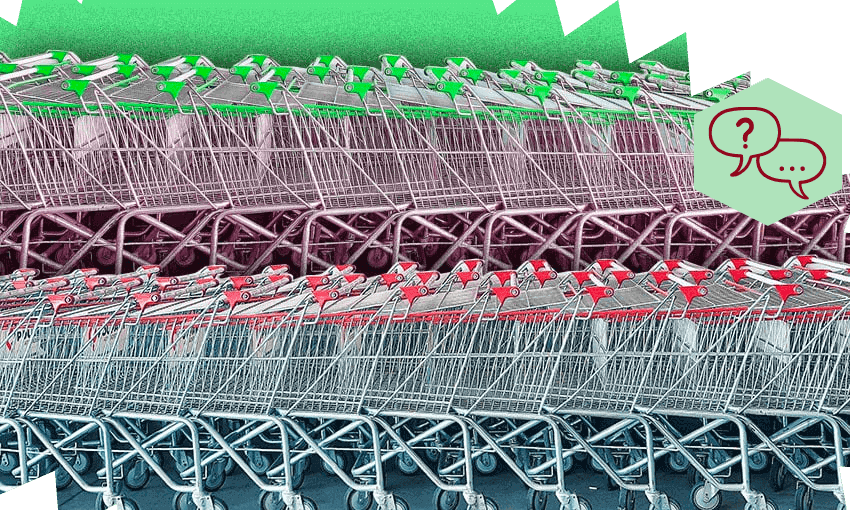 Yesterday’s massive Commerce Commission report into the state of our supermarkets shied away from slicing Foodstuffs and Woolworths into wholesale and retail arms, or the government helping a new entrant into the market. Bernard Hickey explains what it recommended instead.

As I both feared and expected when its draft review was published last year, the Commerce Commission has backed away from recommending an arduous and complicated Telecom-style break-up of Foodstuffs and Woolworths NZ, or the government-assisted launch of a competitor.

Instead, in its final 609-page report released yesterday, the commission recommended that a grocery regulator be set up to police a mandatory code of conduct for the industry, along with industry practices on deals with suppliers, promotional pricing and loyalty schemes. It also wants to try tweaking planning and fair trading laws to encourage private competitors to enter the market, possibly with the help of one or more of the duopolies voluntarily offering to sell them goods on transparent wholesale terms.

Possibly the most compelling new detail in the report is the revelation that the duopolies have so far used a total of 190 land covenants and shopping-centre exclusivity clauses to stop competitors getting access to the juiciest locations. In 150 of those cases, the covenants and exclusivity clauses have protected Foodstuffs and Woolworths NZ for more than 20 years. The commission proposed prohibiting the use of these clauses.

The power of the covenant

Reading about the bullying, the rent-seeking and the use of laws designed to protect the environment to instead add a layer of super-profit into the cost of everything we buy in supermarkets is a lot like finding out how the mortgage-fueled housing market works. Watching an official inquiry conclude not much can or should be done to rectify this was also eerily familiar.

Accidentally on purpose, Aotearoa has found itself held hostage by uncompetitive markets and dominant market players for two of the basics of life: food and shelter. A series of accidents of political history tied to a naive three-decade-long assumption that free markets would always provide the basics and the luxuries of life both efficiently and fairly has made our housing and groceries some of the most expensive in the world

Our body politic is only now waking up to the economic and social pain of allowing markets to be consolidated and then dominated by a few players who capture the architecture of government to protect those superprofits. Here the United States are ahead of us, with president Joe Biden launching a widespread campaign against the abuse of market power, targeting industries as widespread as technology, meat-packing, airlines and pharmaceuticals.

So what did the Commerce Commission find?

Here’s a summary of the overall findings of the report:

And the commission’s main recommendations:

Remarkably, the commission found there were so few choices at competitive prices for smaller grocery operators that they often simply bought their supplies at retail stores like any other consumer.

“We consider that the New Zealand market could sustainably accommodate at least one more large-scale rival, and that reducing current constraints on entry and expansion would help to facilitate this. In the long term, actual entry or expansion is likely to be the greatest driver of competition,” the Commerce Commission wrote.

“We consider that major grocery retailers offering wholesale supply to other retailers is likely to be the most successful long-term solution for improving access to groceries for resale.

However, “there is unlikely to be sufficient demand to support a viable independent wholesaler over the longer term. Large grocery retailers throughout the world typically source and distribute products to their own retail stores, rather than purchasing from a wholesaler. This is also true for New Zealand’s major grocery retailers, and some larger-scale potential entrants.”

‘Why we don’t want to break them up’

The Commerce Commission said it considered a regulated wholesale access regime that would have enforced “vertical separation” of the two groups in a way that their wholesale and retail businesses were run separately.

But it decided against a break-up because:

“Introducing a regulated wholesale access regime for groceries would be very complex due to the wide range of products and dynamic nature of the sector.” Further, “there are significant efficiencies associated with integrated retail and wholesale grocery operations, and there would be a range of practical challenges and transaction costs associated with separation.”

“Therefore, we recommend that the major grocery retailers be given the opportunity to negotiate commercial wholesale supply arrangements with other retailers, with the regulatory oversight described above.”

It went on to recommend a mandatory grocery code of conduct based on the Australian code, enabling collective bargaining by some suppliers, and strengthening the unfair contract terms regime for “business-to-business” contracts.

It also recommended the whole industry be reviewed again after three years to see whether the tweaks had worked.

The government will be happy it doesn’t have to spend years trying to disentangle the two giants and their suppliers, or have to splash out to build a new “KiwiMarket” competitor.

The commission also delivered a little kicker to its report, noting that it planned to open formal investigations to enforce compliance with existing legislation, without specifying who it would go after and over what.