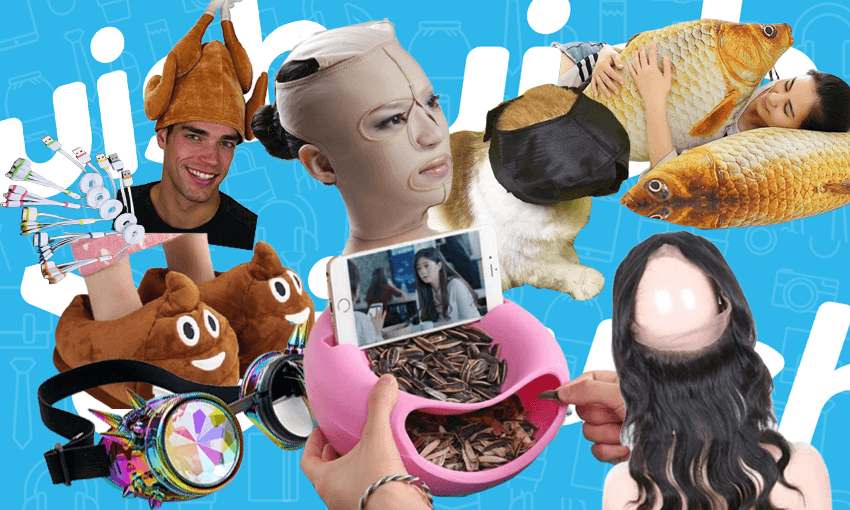 Making sense of Wish and its bizarre, freaky ads

What is Wish? Is it legit? And why does it advertise so damn much?

“If Wish targeted ads are a window to your soul, then my soul is an absolute nightmare,” deputy editor Alice Neville quipped in the office one day. On Facebook, she’d received ads for a severed ‘finger’, a gimp suit, a wig-beard, and a pair of lace-up men’s briefs. In the past, I’ve received my fair share of nightmarish ads as well. Namely, that one time I got an ad for a prosthetic tongue.

Wish is seemingly everywhere. Their products are weird, often funny, and sometimes quite terrifying. The most freakish of them all seem to live on Facebook. But even then, you learn to get used to the tidal wave of bizarre. Like with any ad, you zone out, scroll on, and assume it’s just some scammy website trying to sell you tat for a dime.

Except it’s not. Wish is real, Wish makes money: like, $8.5 billion kind of money. After Amazon and Alibaba, it’s the biggest e-commerce marketplace in the US by sales, with 90 million people using Wish at least once a month. Its CEO, Peter Szulczewski, is now a billionaire.

So where did this bizarre, eclectic multibillion-dollar giant come from? Is it legit? Is it useful? And why does it advertise so damn much?

Wish is an online e-commerce company based in San Francisco, California. Founded by former Yahoo and Google programmers Peter Szulczewski and Danny Zhang, the pair started their company as a wish-list creating app (hence the name). During that time, they realised the most popular goods weren’t pricey brand names, but low-priced goods attractive to “value shoppers”. So they started partnering with merchants, mostly from China, to sell these goods directly to customers.

But they sell so much stuff for crazy cheap. How in the world are they making money?

Because they sell a lot of it. Wish has buyers from all over the world and it takes a 15% cut from each sale. And while companies like Amazon spend millions building infrastructure for quality service and fast shipping, Wish doesn’t really focus on that. They partner directly with manufacturers (mostly from China), therefore cutting out the middleman and selling things for much cheaper than retail prices.

That said, Wish is losing around $190 million annually, but it claims it could be profitable if it didn’t spend so much on marketing.

Marketing? Is that why it has so many ads?

Yes, especially if you’re an avid user of Facebook and Instagram. In 2015, it was reported that Wish was spending $100 million a year on Facebook ads alone.

The thing is, Wish has always been heavily entrenched in the online ad world. Before Wish existed in its current form, Szulczewski and Zhang sought to create recommendation technology (ie: using deep learning to suggest tweets and articles you might like) which it later saw potential to be used to position more relevant Google ads in front of users. Eventually, it pivoted because it “sucked” at business development. But the tech is still there, using its deep learning algorithms to optimise which ads to show on Facebook and to whom. Obviously, it doesn’t always get things right, but at least there’s some sort of method to the madness.

OK, but why does it sell (and advertise) so much weird shit? Why is it telling me to buy a gimp suit/bong/cat mask/prosthetic tongue?

One theory, which I’ve often thought the most plausible, is that Wish employs the same tactics that viral marketers do. That is, they advertise the most outrageous stuff in the hopes that people will screenshot (and share) their findings with friends, therefore getting the Wish name out there. And you know what? I’m not the only one who thinks that might be the case.

However, despite my ingenious theory, it turns out there’s a far more pedestrian reasoning behind it. Two words: Facebook. Algorithm.

For a while now, Facebook’s algorithm has rewarded the shocking and unexpected because that’s what gets the most clicks. People are curious, they click through to find out more, which thereby informs the algorithm that it’s is of ‘interest’ to you. It assumes that since you’re clicking, it must be relevant, and maybe, it’ll be relevant for a lot of other people in your circle too.

“The theory goes that Facebook, with its massive mine of user data, could far more effectively target products to consumers in real time and save companies time by not forcing them to upload each image separately as a new ad.”

“Wish has long been a large and dedicated advertiser on Facebook, quickly embracing new ad formats as fast as Facebook can release them… So when Wish decided to adopt Facebook’s new dynamic ads this year, the company, unsurprisingly, went all in.

“Wish currently has over 170 million unique products for sale, with over 9 million new products uploaded every week. When it made the transition to dynamic Facebook ads it gave Facebook access to every last one of them.

“Theoretically, Facebook should have plucked out shoes on Wish and served them to shoe lovers, or pushed perfume on perfume lovers. But since Wish’s catalog is so massive and Facebook’s audience is so broad, some strange products bubbled their way to the surface.”

To a large extent, faulting Facebook’s algorithm for the onslaught of freakishness makes a lot of sense. After all, Facebook and Instagram aren’t the only places where I’ve seen Wish ads. Sometimes, they pop up on mobile games I play, and for the most part, they’ve been pretty benign: knitted blankets, phone cases, dresses, that sort of stuff.

“It’s a consequence of Facebook’s ad system. It’s basically rewarding high shock value items that people will click on. If we just show a garden hose or jacket, the CTR (click-through rate) wouldn’t be as high,” Szulczewski confirmed in the Daily Beast piece.

“People are just clicking on things because they’re crazy. No consumers are actually purchasing these products… No one is going to buy a plastic tongue thing.”

OK, so if they’re not buying a ‘plastic tongue thing’, then what are they buying? And who’s buying it?

I think the more pertinent question is what aren’t they buying? Wish sells everything you could possibly think of. Watches, wedding dresses, wallpaper – you name it, they sell it (for cheap).

“The Walmart crowd, but younger,” a board member once said when describing Wish’s demographic, adding that most orders come from those living in small towns and heartland America. Wish is for those who aren’t exactly willing to shell out $120 a year for an Amazon Prime subscription (FYI: back in 2015, Amazon actually tried to purchase Wish for $10 billion).

So now that I know it sells normal stuff too, is buying from Wish actually worth it? Or am I going to waste $5 ordering something that will break in three days?

Honestly, it probably depends on what you’re getting. While I’ve never bought stuff from Wish, I have bought stuff from AliExpress which is very similar in that it allows merchants (probably the same merchants that sell on Wish) to sell directly to customers for dirt cheap prices.

E-commerce sites like these are risky because not only is it hard to gauge what they’re like in real life (a problem with all online shopping, really) but, more often than not, you get what you pay for. Because of this, I personally only ever purchase low-risk, inconsequential items from sites like AliExpress: laptop covers, handheld mirrors, a gym bag, and many, many phone cases of various colours and sizes.

When it comes to more ‘high-value’ items, prepare to be disappointed and/or pleasantly surprised. It’s a gamble as to whether you’re spending your money in a worthwhile way (unless you’re a YouTuber who’s happy to do it for the #content).