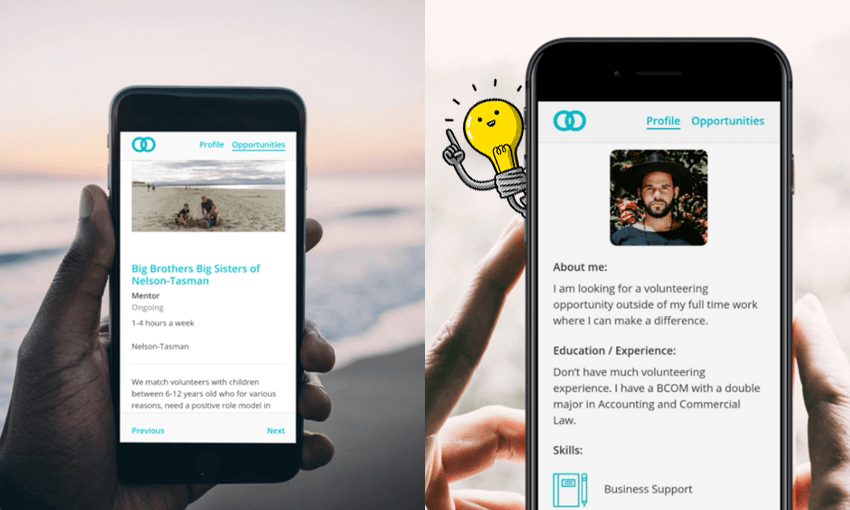 Collaborate matches volunteers with organisations that need help based on skills and interests (Photo: letscollaborate.co.nz)

How Collaborate matches volunteers with jobs that match their skills

Collaborate matches volunteers with organisations that need help based on skills and interests (Photo: letscollaborate.co.nz)

In our Q&A series, The Lightbulb, we ask innovators and entrepreneurs to tell us about how they turned their ideas into reality. This week, we talk to Collaborate co-founder Poppy Norton who’s helped create an app matching charitable organisations with volunteers.

Nominated for a Hi-Tech Award for the second year in a row, Collaborate is the brainchild of four young women – Poppy Norton, her sister Holly Norton, Ceara McAuliffe Bickerton, and Sophie Harker. They wanted to make volunteering easier for everyone involved, so they created an app matching charities who needed help to those who could offer their time and skills for free. Since launching in October 2017, thousands of charitable New Zealanders have signed up to give something back to their communities in a way that fits their skills, interests, schedule, and time.

Today, all four women continue to volunteer their time to Collaborate on top of working their full-time jobs. It’s a platform made by volunteers for volunteers. Poppy Norton explains how that works and what sparked Collaborate’s lightbulb moment.

First of all, give us your elevator pitch for Collaborate.

We’ve created an app which is effectively Tinder but for volunteering. It’s supposed to make volunteering more accessible to anybody who wants to get out there. But in particular, why we started it was for young people to have an easier way of finding volunteering roles that matched their skills, interests, and time they had available.

How did the idea for Collaborate come to you? What was your lightbulb moment?

But when Holly was telling me about this, I realised I had the complete opposite experience. While I was in high school, I got diagnosed with depression and it turned into quite severe chronic depression. Something that kind of helped me get out of that was being able to volunteer while I was a student at university. And then around 2015 I got my first full-time job. I struggled to find volunteering opportunities that were outside of Monday to Friday, 9 to 5, so I was having a bit of internal panic.

That’s when I realised there was this massive disconnect. I was desperate to volunteer whereas Holly was getting too [many opportunities]. And that’s how we came up with the idea for Collaborate.

In the beginning, it was four female co-founders. Now we have a team of about 17 people and everybody works full-time as well as volunteering their time to Collaborate.

So how did you go about making your idea into a reality?

We actually started off quite differently. The focus was about young people and youth-led organisations, so we thought a good way to do this was to have meet-ups with organisations in Wellington. [But] we realised people were actually too time poor and it was external people wanting to volunteer their time to these organisations. So we started looking at platforms like Tinder, Uber and Airbnb and spoke to lots of people from these organisations and volunteers about it.

Then when we started to do some research to find out how much it would cost to build an app, we were a little bit shocked when we realised it wasn’t a couple hundred dollars! By that stage we’d already spoken to heaps of people who were behind the idea, so we realised we couldn’t give up. So Springload, a development firm in Wellington, actually volunteered [to help build] what we have with the app so far and gave it to us for free.

How do volunteers get matched with volunteer opportunities? Is there a method behind that?

There’s an algorithm built into the app. The volunteer builds a profile (who they are, a little bio about themselves etc.) and then they select interest areas and skills which have been selected from the Ministry of Business, Innovation and Employment (MBIE) skill set. Then when an organisation uploads a role to the app, they select what interest areas and skill set that role falls under so that when people go through the app, it lists those ones first. It’s also done by geolocation so things closest to the user will appear in the app first. The idea is that if someone had a spare hour, they could go on the app and see what good they contribute immediately in their community.

How many volunteers and organisations does Collaborate have?

At the moment we have about 1,400 volunteers [signed up] and we’ve got over 350 community organisations, predominantly in New Zealand. Although a third of our roles are remote so people can actually volunteer from the other side of the world.

We’ve got big names like Cancer Society and Plunket [on board], but also a lot of names that people don’t know. There are some amazing organisations out there that are empowering people through music and dance, or cooking meals for people in need. So there’s a lot of community organisations that we didn’t even know existed before we started this which is really cool.

Instead of being a charity or a fully for-profit business, Collaborate is a social enterprise. What was your reasoning behind that?

So what are some of the ways you make money in order for Collaborate to sustain itself?

At the moment we haven’t made any money [but] at the moment, we’re developing a corporate volunteering arm of the app. That’s to encourage not just those big corporates [take part], but also to help organisations upskill their staff through ongoing volunteering and being able to give back to the community in a really skilled way. So that’s how we’re developing our business model.

Probably our biggest challenge is not having that revenue at the moment. We have a lot more tech that we’d like to build… but we don’t have those funds to take it to the next level. That’s probably our biggest thing that’s holding us back at the moment. But we’ve just been overwhelmed by the amount of support and interest people have been giving us. So even though it was quite scary in the beginning, it’s turned into something really cool.

Definitely the launch of the corporate volunteering arm. But also this week, Te Papa’s new nature exhibition is launching and we’ve developed a custom version of the app where you can see volunteering opportunities in New Zealand that are all for nature-based organisations. Hopefully, that gets more people inspired to do volunteering and look after our natural environment.