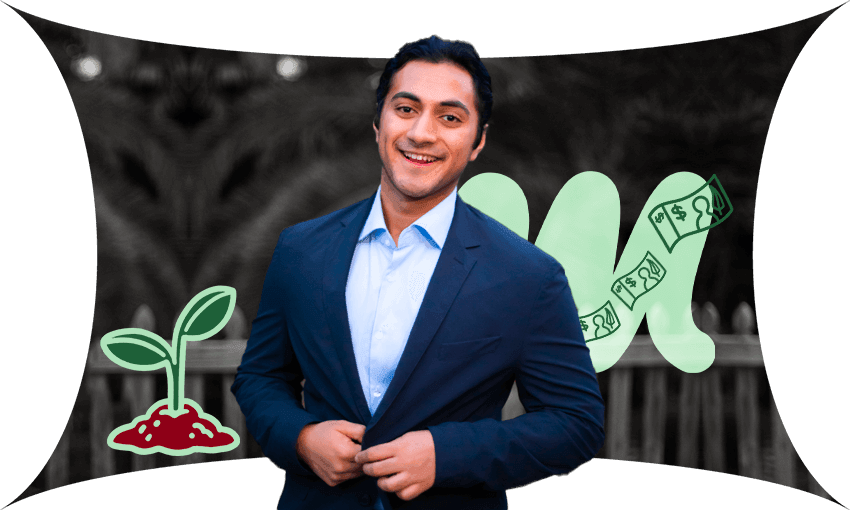 The young New Zealand tech entrepreneur measuring carbon unlike anyone else

Auckland born-and-raised Saurav Bansal is on a mission to accurately monitor greenhouse gas emissions in real-time. He tells Reweti Kohere why to him, this work is personal.

Whether it’s a celebrity, a potential date or an interviewee, you can glean a lot about someone by searching their Instagram. After typing “Saurav Bansal” into the search field, a young man dressed in blue-hued work attire smiles back. From the look of his grid, he loves nature. There are pictures taken in Singapore, Sydney and Aotearoa. He hasn’t posted since March 21.

Lately, it turns out, he’s been too busy for social media. The 23-year-old, born and raised in Tāmaki Makaurau to an Indian father and a Tongan mother, is the founder and chief executive of Singapore-headquartered GAIT Global. For the last eight months, GAIT, which stands for green artificial intelligence technology, has been quietly operating at the intersection of climate change and technology, developing machine-learning software that it hopes can accelerate action. In a marketplace saturated with platforms promising oversight and transparency, GAIT claims it’s the only business measuring greenhouse gas emissions at an accuracy rate of more than 99%, at any time of the day, for 365 days of the year.

Aside from a piece in The Sydney Morning Herald, very little has been written about GAIT or its founder – a reflection of how under-the-radar the venture has flown so far. When I speak with Bansal in early May, he’s back in New Zealand to check out a project between Lake Hawea Station, one of the country’s premier high country farms, and Christchurch-based soil consultancy Soil Matters. His ever-so-slight Aussie twang makes sense when I learn that after finishing at King’s College, the former deputy head prefect crossed the ditch to study commerce and marketing as an undergraduate, before doing a master’s in information systems at the University of Sydney. He’s worked as a consultant for a US-based cloud computing tech company, then as chief marketing officer for Develop for Good, a US-based non-profit creating technical tools for other non-profits. There he says he helped 1,200 developers and designers gain much-needed tech experience, while overseeing 80-plus partners including Unicef, World Health Organisation and World Bank.

It was at Develop for Good that he came across the “big problem” with measuring carbon. So much of it is done physically, he explains – in some cases, shovels are taken to fields and soil samples are sent to laboratories, or a measuring tape will size a tree’s width, with the result compared against a table detailing how much carbon a similar-sized tree would have absorbed at one point in time. Such “rudimentary” technology is leading to “a lot of fraud, a lot of greenwashing and a lot of double-counting” in the carbon credits marketplace, he says. GAIT was founded to help fix that.

Taking things that already exist, such as scientifically-backed methodologies and data from sensors and satellites, GAIT has combined them into a system driven by artificial intelligence which “makes them work in unison perfectly,” Bansal says. “I’d even go as far as saying it’s not necessarily technological or scientific innovation. It’s more market innovation… that’s not what has been done before.” So why the shortage of direct competitors? We just had good timing, he admits. While someone else could replicate the company’s technology, “at least, at this point in time, we just happened to be the ones who did it first and well enough to showcase it publicly.”

Bansal explains it to me like this: Imagine holding a balloon representing an area that someone is measuring for carbon. Just like the balloon, that space can hold only so much gas. Traditional technologies measure the balloon’s contents on day one and then at regular intervals to compare the subsequent values over time. By contrast, GAIT measures the rate of the gas entering and exiting the balloon in real-time, or more accurately the net ecosystem of exchange, the cycle of change in gas levels between landscapes and the atmosphere. Relying on sensors that collect data on atmospheric gases, and satellites that collect spatial data, the technology platform, made up of internet-of-things, cloud infrastructure and artificial intelligence, analyses it all. The measurements then give carbon project owners – from tree-planting and conservation work to waste conversion and renewable energy – a greater and more immediate awareness of their environmental impact.

How does a 23-year-old have the vision to do what Bansal has done? The answer partly lies with his parents. As a second-generation New Zealander, Bansal says he’s always been motivated to give back to his immigrant parents, who moved to Aotearoa with “really nothing to their names”. His dad left his home in Chandigarh, north India, 30 years ago, while his mum is originally from the villages of Hoi and Lapaha in Tonga. They still live in Tāmaki Makaurau, as do Bansal’s two older sisters, both doctors helping Pasifika communities in South Auckland and Mount Wellington. “And then there’s me”, he says with a chuckle. “Maybe I should’ve become a doctor too.”

His work is personal in another way – climate change is front and centre for many countries in Southeast Asia and the Pacific. Major cities like Jakarta, Mumbai and Dhaka, and entire island nations such as Tuvalu, Kiribati and the Marshall Islands, are slowly sinking under ever-rising seas. Tonga is susceptible as well – warming seas threaten subsistence farming and increased extreme rainfall is a threat to agriculture. Should the world’s governments fail to halt climate change, “climate refugees” could be forced to seek refuge in other countries – either because their homelands are underwater or the rising heat has made living there unbearable. “For me, GAIT was that opportunity to do something that I’m passionate about, and hopefully a little bit good at,” says Bansal, “[in an area in which] I could genuinely make an impact.”

The fledgling startup currently employs 15 people across Australia, New Zealand, India and the US, and has so far been solely funded by angel investors. It hasn’t started sales yet, but revenue could be acquired two ways, he says. Just like a software-as-a-service business, GAIT could provide subscribing customers with insights beyond carbon and sequestration projects, including vegetation and crop health, the presence of pests and weeds, and even urban developments. Or it could take a cut of the carbon credits a carbon project is awarded for storing, avoiding or reducing greenhouse gas emissions. Bansal says one carbon credit in New Zealand was worth $20 a year ago, but now it’s worth $80 and could rise further as demand outstrips supply.

Right now one of the main tasks at hand is getting the company’s name out there and building a good reputation. The CEO is flying to Australia in a fortnight as GAIT is sponsoring a national carbon conference. And the company has been announced as one of six finalists for The Liveability Challenge, a competition hosted by the Singapore government’s sovereign fund, Temasek. Having made the final cut from an initial global pool of 400 entries, GAIT could win over $1m if it’s named as the grand prize winner, and stands to gain at least $100,000 investment each from the competition’s six strategic partners. Bansal says the company is working with governments and large private organisations as use cases, although non-disclosure agreements stop him from divulging any more details.

From there, it’s just a matter of growth from adoption, he says. “And again, building the same thing – trust and credibility.” Perhaps his next Instagram post is right around the corner.