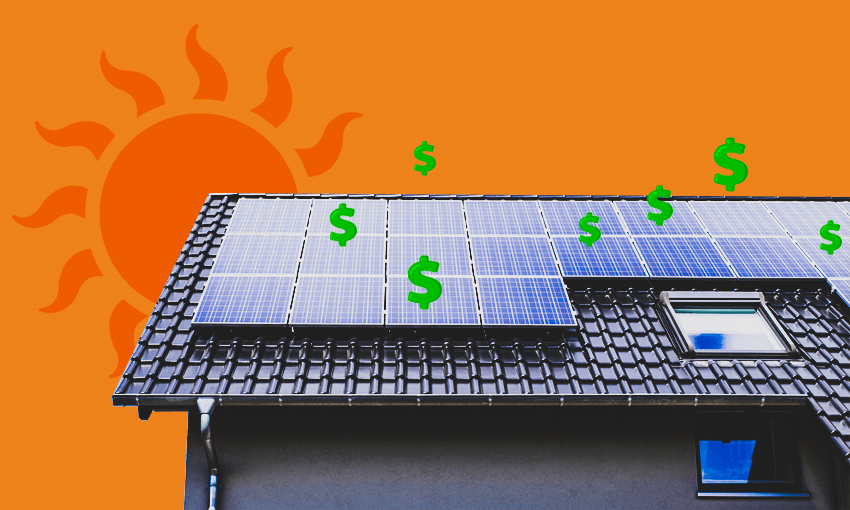 Bernard Hickey: A solar panel for every roof

Our broken electricity market is a roadblock to achieving carbon zero, rather than the springboard it should be, argues Bernard Hickey – and the only answer is to tear the whole thing down.

I’m ultimately hopeful about the ability of technology to solve this planet’s problems, if only we could dislodge the network monopolies forming into roadblocks at every turn. Markets can be wonderful things, as long as they regulated to ensure natural monopolists and their ilk don’t do what is natural to them: use their power and scale and connections to stop new competitors eating away at their super profits.

Our electricity industry is a perfect example. If we’re not careful, New Zealand’s natural headstart of having oodles of supposedly free water-powered electricity will turn into a millstone around our neck that stops us from getting anywhere near carbon zero by 2050. It’s not looking good right now. The Climate Commission assumes that car owners will opt en-masse to switch to electric vehicles, in part because it expects electricity costs to drop 30%. Right now, wholesale electricity costs have tripled in 12 months and NZ burned through one million tonnes of coal last year. Meanwhile the independent retailers keeping a lid on retail prices have all gone into their shells because the wholesale market suits the big network gentailers just fine and has burned off the little guys.

Back in 2015, I was hopeful a rash of new low-cost tech-driven startups could use the apparently-functional wholesale electricity market to provide some real competition for the former state-owned electricity generator-retailers. That year I actually got excited when I signed up as a customer to Flick Electric to avoid paying the big profit margins applied by the big gentailers, Meridian, Mercury, Genesis, Contact and Trustpower. The deal was that I would pay a fee to Flick Electric on top of the wholesale price, which was then much lower than it is now and, I hoped, likely to fall further when Tiwai Point closed down, unleashing 13% of the nation’s power supply onto the market.

I even trialled charging a plug-in electric car late in the evening to take advantage of lower rates in the middle of the night. I watched the app on my phone to see how my power bill was lower than with the gentailers, week by week. Flick’s use of the wholesale market, along with others such as Electric Kiwi, seemed to suggest a new era of innovation and competition would keep the big guys honest and open the way for consumers to use technology to reduce their power use and costs.

But that was then and this is now. Flick Electric has had to stop its growth because of extreme volatility in wholesale prices and a sharp increase in wholesale prices and futures prices over the last 18 months. As detailed by Flick Electric CEO Steve O’Connor in this week’s episode of my podcast When the Facts Change, the failure of the wholesale market to provide a liquid and dependable place to buy has made it difficult for independents without huge balance sheets to use the market. The gentailers are back in complete control.

That’s not only a pity for competition and innovation, but it also embeds into an old and conservative industry a network-driven group-think: that the only solution to the climate change challenge of electrifying the transport fleet is to build big new wind farms and hydroelectric plants utilising an even beefier grid and lines. This will involve billions of investment in concrete and steel, along with decades of resource consents, land purchases and higher charges for new network investments.

Here’s an example of the sort of future seen by Meridian in its latest update for investors: just a sliver of new electricity generation from rooftop solar over the next 10 years, with wind and geothermal doing the bulk of the heavy lifting, as set out in the graph below.

That’s not how the rest of the world is doing it, and it’s not the cheapest way to do it, especially once the extra cost of beefing up transmission systems is taken into account. But distributed power generation just doesn’t fit into the group-thunk business model.

I spoke to SolarZero’s Eric Pyle for this week’s podcast about how the company has brought on thousands of customers by offering solar panels and batteries to households for a monthly fee, rather than a big upfront capital cost. SolarZero guarantees customers their total power bills, including the monthly fee to Solar Zero, will be less than their current power bills. It has delivered average savings of $100-400 per household per year.

That’s possible now the cost of panels and batteries has dropped substantially, bringing new generation costs into line with wind and below that of geothermal and fossil fuel plants. SolarZero uses its software to optimise power use from the panels and batteries, buying power off the grid when rates are low, and shifting power demand for hot water heaters to reduce bills.

Just imagine if half of New Zealand’s homes were to quickly “panel and battery” up. It would create the equivalent of dozens of new power plants, create a much more resilient network and avoid billions of spending building up power networks to cope with the extra surges of demand likely to come from electric car charging. It would be much faster, much more capital efficient and much more competitive than the current “big network” plans.

Even better, the government could do to the electricity sector what was successfully done to Telecom: break up the “generator” from the “retailer” to remove that network monopoly power. Along with targeted regulatory intervention, it has worked a treat to foster lower prices and industry innovation.

Here’s a big idea from left field. Why doesn’t the government break up the gentailers by holding on to the dams and windfarms with its 51% stakes in Mercury, Meridian and Genesis, and let the private shareholders keep the new independent retailers? The other option would be fund the capital requirements of a massive panel and battery rollout. It would work much faster than new builds and foster competition in one fell swoop.