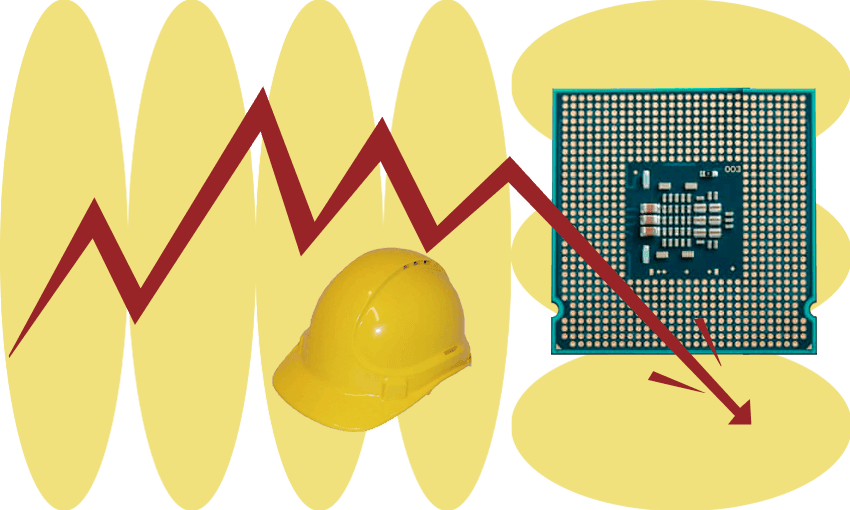 Construction and tech are facing unprecedented shortages. Why?

Whether you’re looking for a PlayStation 5 or a new house to put it in, you’ll know that material shortages have placed both in extraordinarily short supply. But how did we get here?

“Unprecedented” is the word of the decade.

In the midst of a pandemic that just won’t quit, escalating beef between two of our largest trade partners, and an international technology boom, it’s not surprising that global trade has been a bit slow.

But longer shipping times and higher prices don’t communicate the depth of the issue. As manufacturers race to get their hands on the same materials, smaller fish are being eaten alive.

Two of the most contested materials are timber and semiconductors, fundamental building blocks in everything from our phones to our homes. But while Apple and GJ Gardner aren’t going anywhere, this new frontier of competition poses an existential threat for their competitors.

But why is it so competitive in the first place?

In a way, it’s death by a thousand cuts. There are several compounding factors that got us here and the fact that computer chips and timber are facing shortages at the same time is largely coincidental.

The elephant in the room is Covid-19, which despite its massive impact on shipping and border control is more akin to a straw that broke the camel’s back. Except it’s a fairly heavy piece of straw.

The bigger issue is one of demand. With a technology boom sweeping the world and an extreme shortage of housing here in Aotearoa, demand for these materials and the things they build are at an all-time high. Pile on an international pandemic which halted construction projects and forced everyone to work from home and our ability to meet that demand was crippled.

Beyond that, other circumstances have put further strain on construction in New Zealand, while international politics has further hampered the tech industry.

What’s going on with construction?

Despite our sizable logging industry, New Zealand’s builders are desperately low on timber.

Once again, this is due to a combination of factors. Aotearoa’s Free Trade Agreement with China makes it significantly more profitable to send logs overseas than to process and sell them domestically. On one hand, this has been a huge boon for our logging industry, but it’s also driven prices higher as local sawmills compete with larger processors in China.

Those prices are driven even further by subsidies from the Chinese government, which mean that Chinese processors ultimately pay less than New Zealand sawmills

Furthermore, China has seen its own increase in demand for wood. Chinese processors are larger and have fewer environmental restrictions, making their panels much cheaper and thus a very popular export. Meanwhile, China is also expanding construction domestically.

All up, this means almost a third of our wood goes to China alone.

The strain this competition is placing on our sawmills, combined with a devastating pandemic, has seen many close their doors in recent years. The resulting lack of milling capacity has extended that strain to construction companies.

“It’s despairing. Everything that is required to construct a dwelling, from timber to plasterboards, have an insane lead time,” says Khue Chu, a quantity surveyor for Aulfon Construction Limited.

The lack of available materials has made scheduling particularly difficult, if not impossible.

“I spend most of my time chasing merchants all over Auckland for materials. If we can’t get materials for the site team, the entire programme is delayed and it affects every trade,” Chu says. “Many sites in Auckland are at a complete standstill.”

But even small companies have it better than some, with a few individuals turning to a life of crime as a result. “Site break-ins have increased, with mostly timber being taken,” says Chu, “I suspect by people who don’t have trade accounts with suppliers, because construction companies get the first allocation of timber.”

Despite the dearth of materials, demand for new housing isn’t slowing down. With no major changes in sight, it’s all looking a bit bleak.

“I don’t expect any changes in the near future,” says Chu. “I hope there will be improvements soon, but at this rate it’s quite disheartening.”

Is the tech industry faring any better?

While our timber shortage is localised to New Zealand, the scarcity of semiconductor chips is very much an international issue. The upshot of that is a less direct impact on Kiwi lives, though that isn’t much comfort for those in the tech industry.

Some local companies have risen to meet the demand. Auckland-based Rakon, which previously served as a second-choice supplier for chips, has quadrupled its profits over the past year by upscaling its operations. This is thanks to major electronics manufacturers stockpiling chips from around the world to brace for an increasingly unpredictable market.

That’s great for sellers, but what about the companies that need to buy the chips?

GPC Electronics, one of the largest tech manufacturers in Australasia, is keeping its head above water through its China office, which works full-time to secure a steady supply of chips and circuit boards. For some components, the lead time stretches beyond a year.

Companies around the world are experiencing similar wait times, with several major companies relying on these components to do business. Manufacturers such as BMW and Mercedes-Benz, which now use a lot of computer chips in their cars, have even started to build and stockpile vehicles without necessary components so they can be installed later.

This lack of materials is caused by, yet again, a combination of factors. The ongoing trade war between the United States and China has complicated things quite a bit, as tariffs have restricted trade between manufacturers. The introduction of 5G has also increased demand for the kinds of technology that use these components.

To top it off, Covid-19 had people working from home for the better part of two years. That’s meant a lot of new laptops and webcams, which adds up on an international scale.

As for how long this will last, responses are mixed.

TM Roh, the president of Samsung Mobile, recently told executives to expect improvements in the latter half of this year. Meanwhile Takeshi Kamebuchi, a director at Toshiba, told Bloomberg that supplies “will remain very tight until at least September,” potentially even stretching into next year.

In the best case scenario, things could improve by the end of the year, but don’t expect the situation to change overnight. Even if things do improve on the manufacturing side, it could be a while before we see the impact. The most realistic answer is that we don’t know.