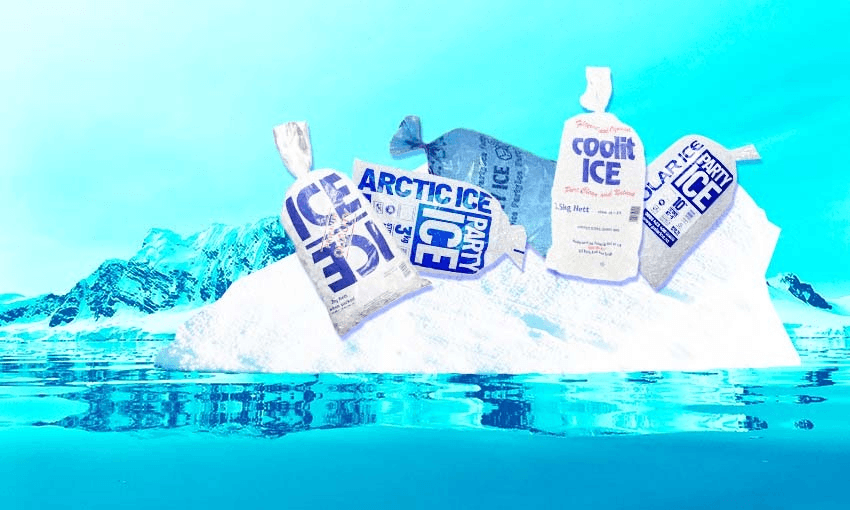 Where does all our party ice come from?

Alex Casey goes on a frosty pilgrimage to meet the people making the ice that has cooled your chilly bins all summer long.

It is a stinking hot summer morning in Manurewa and we are in a winter wonderland. The thick layer of flaky, pristine snow is already approaching chest height, with a lone man in a white onesie tending to it as it gracefully falls from twinkling frosted pipes in the ceiling. Bruce Saifiti, operations manager at Polar Ice, reaches through the window and picks up a cloudy, jagged shard, holding it towards the light like a gemologist inspecting a precious stone.

No phrase is more evocative of a New Zealand summer than “party ice”. Party. Ice. Nothing compares to the energy of the word “party” followed by the slithering cool of the word “ice”, eliciting both a feeling of unquenchable thirst and unshakeable potential. Across the country, we’ve raced across hot concrete, a blue or crystal clear sack of ice in each hand, gleeful barefoot burglars ready to embrace the opportunities of drinks on the deck, of camping cheese and crackers, and of fresh fish caught straight from the sea.

Given that we’ve seen both the hottest temperatures on record, and the second summer where New Zealanders haven’t been easily allowed to leave the country, it is no surprise that the last month has been huge for the ice industry in New Zealand. “Summer comes and you just… wooosh,” Saifiti says from his office, gesturing not unlike Elsa creating an icy kingdom in Frozen. In the cubicle next to him, a humorous card blu-tacked to the wall features two penguins sitting at a bar in Antarctica. “What do you mean you’ve run out of ice?” one of them asks.

After experiencing burnout from 35 years in international logistics, Saifiti was looking for something more chill when he discovered the ice industry. He started in the role in June last year, and it was a quiet introduction. “Winter was a really tough time for the industry,” he says. “The restaurants were all down with Covid, we were still selling to petrol stations and food manufacturers but there were all the roadblocks and things like that. No one buys ice, you know? No one buys ice.”

When lockdown lifted and the days got longer, Saifiti says sales went “ballistic” at Polar Ice. Producing party ice, salt ice and artisanal cocktail cubes for the Auckland region, the small team of 12 found themselves working non-stop until Christmas without a day off. Even on Christmas Day, demand was so high that staff came in at 2am and didn’t leave until mid morning. “It was hectic,” Saifiti says, shaking his head.

Further down the country, it was the same story. Hannah Fox at Southern Ice in Christchurch says although she and her partner began storing ice for summer in September in giant offsite freezers, they were still “stunned possums” when the Christmas rush for ice began. “We both started at four in the morning on Christmas Day. Our kids couldn’t open their Christmas presents until the afternoon when we got home,” she says over the phone. “Honestly, it’s been crazy, it was going out the door as fast as we were making it.”

It’s the “making it” part that many people probably don’t consider when they’re smashing their frozen baggie against the bach steps in the blazing sun. At Polar Ice in Manurewa, we don hairnets and head into the factory, under strict instructions to not take any pictures. Perhaps I was about to find several fur-wearing blokes traveling from Antarctica, or just endless rows and rows of dinky Kmart ice cube trays? Kristoff? Sven? Are you in there?

Through the plastic curtain there were fewer laser lights in the party ice room than expected, but just as wet and sticky a floor. We were met with a giant metal tub the size of a one bedroom unit that fills up with party ice twice a day, all generated from three curly looking blue machines on the roof of the building next to a sign that says “don’t fucken touch”. I ask what goes into the machines in order to make the ice. “It’s basically just… water,” Saifiti laughs. I don’t know what I was expecting him to say.

The metric shit tonne of party ice is kept moving by an enormous set of gnashing metal teeth, which sends the ice down a chute, up another chute, and down into the automated bagging machine. Around the corner is the room that makes salt ice, delicate crushed flakes that are a favourite of fishing fans for their slow melting time. In winter, truckfuls of it also finds their way to schools and kindergartens, tipping the salty snow onto the ground for kids to play in. “Snowman day or whatever,” Saifiti laughs.

When it comes to the bread and butter of ice – the 3kg bag of party ice – you’d be surprised at the variations in quality, Saifiti says. “I have to say, when I look at our competitors’ ice… we make really good ice.” What makes a good piece of ice? “You want a solid piece and you want that perfect pinhole through the middle” he says, poking his pointer finger on one hand through an ‘O’ shape made with the other, in what a more juvenile person than me might interpret as a gesture for sex. “Some of our competitors… their ice is much shorter, sort of small chunky little bits,” he says, shaking his head.

Although petrol stations, supermarkets and dairies are to be expected party ice buyers, Fox has also seen their ice turn up in surprising places in the South Island, thanks to the likes of Wim Hof and Art Green. “People run these wellness retreats and they order quite a lot of our ice for their ice baths,” she laughs. Local sports teams will also use mixtures of party and salt ice for the ideal injury recovery bath, and a man with an electric food grade chainsaw visits to sculpt chandeliers and swans for weddings and Queenstown ice bars in winter.

Both Saifiti and Fox say the rush has slowed down, but things are expected to pick up again in February. Then, in a few months when a chill sets in the air across the country, they will finally get a much-deserved break. Unable to take his caravan up to Pakiri this year because he’s been working for weeks straight, Saifiti is looking forward to heading home to do some odd jobs. “I don’t think people realise that when they are all off enjoying their summer holidays, we are working really hard to get ice out there to them,” says Fox.

“There’s no such thing as a summer holiday for us, but that’s fine because we love skiing,” she adds. “We’re winter people.”