An investigation has found that workers on many palm oil plantations suffer shocking levels of abuse and exposure to chemicals so toxic they can cause miscarriage. But, as Amal Samaha explains, a consumer boycott of the brands that use the oil may not be the answer.

Some of New Zealand’s most popular cosmetic products are linked to severe abuse, sexual assault, and endemic health problems among Malaysian and Indonesian palm oil workers, according to a new investigation by the Associated Press. It’s the follow-up to another investigation in September which revealed that many of the same palm oil plantations made use of child labour and outright slavery.

Palm oil products have come under fire in New Zealand many times before, but usually for the devastating environmental impact the plantations can have. Clearing land for any tropical crop often necessitates clearing hectares of native forest, home to endangered species such as tigers and orangutans.

While a huge number of goods sold in New Zealand are potentially linked to these practices, there is no labelling or certification requirement for products which use palm oil, nor any real legal ramifications for companies which benefit from slave labour and other forms of abuse.

Tracking palm oil from the worst offending plantations all the way to supermarket shelves is extremely difficult, but there’s no doubt that palm oil is a mainstay of some of New Zealand’s most popular cosmetics and skincare products.

The reports also cast further doubts about the role of the Roundtable on Sustainable Palm Oil (RSPO), an NGO which promotes “sustainable” palm oil products, but which was alleged to have ignored instances of worker abuse.

How palm oil came to be in everything

Palm oil is mainly extracted from the African oil palm, a tree which was brought by western colonists to many of the world’s tropical climates. The reddish pulp is milled, refined, bleached and deodorised into an ingredient in a huge number of products.

Once just one of many oils used worldwide, western industrialists soon found palm oil had near endless versatility. The palms produce more oil per hectare than any other crop, while delivering a product that stays solid at room temperature, rarely goes off, doesn’t smoke when cooked, forms a lather in soaps, and even raises the freezing temperature of ice cream. About a third of the world’s palm oil is burnt by trucks as a component of biodiesel.

Needless to say, this cheaply produced oil generated huge demand, and vast swathes of forest were cleared for palm oil plantations throughout the 19th and 20th centuries. Nowadays, 85% of all palm oil is produced by corporations in Indonesia and Malaysia.

It has been estimated that each person on Earth consumes an average of just under eight kilograms of palm oil every year, and much more if we consider cosmetics or fuel.

New Zealand is a major importer of palm oil, not only inside various products, but also as a raw resource. Dairy giant Fonterra imports more palm kernel expeller, a palm oil byproduct and low cost cattle feed, than any other company in the world. 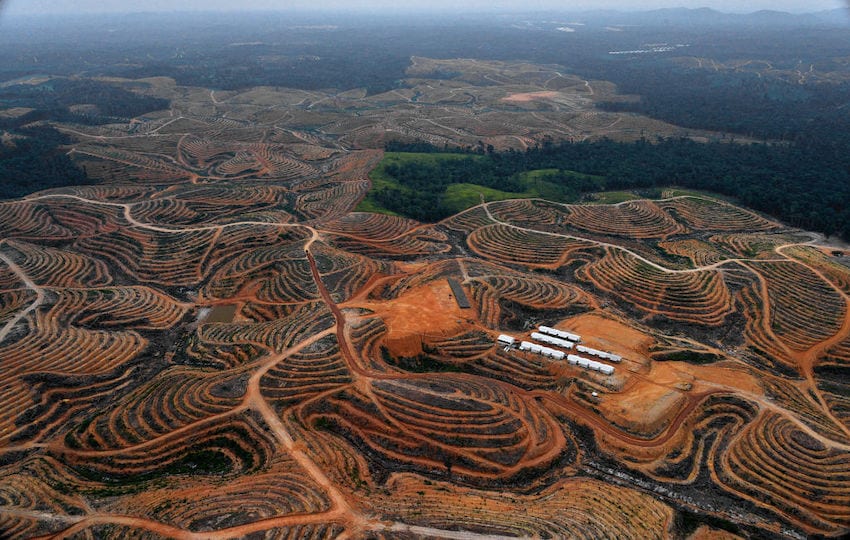 Cleared trees in Borneo, Indonesia, in a forested area being cleared for a palm oil plantation. (Photo: BAY ISMOYO/AFP via Getty Images)

Millions of labourers work in palm oil plantations in Indonesia and Malaysia. The first AP report focused primarily on workers who are undocumented migrants, often from the poorest corners of Asia, trafficked by their employers and living in fear of police raids.

One man, working for the state-owned Felda corporation in Malaysia, said his bosses confiscated and lost his passport, leaving him stranded and forced to sleep on the open ground of the plantation, constantly in fear of an attack by tigers.

His story was by no means unique: of the 130 workers interviewed in the report, nearly all reported similar experiences of being trafficked across borders. Many became indentured labourers, forced to work off debts to their employers for helping them enter the country.

However the vast majority of palm oil workers are Indonesians who cross the porous border into Malaysia to take the low-paid jobs that Malaysians won’t take. The best case scenario is to find a job making $2 a day, but many end up saddled with huge debts, or are forced to work for nothing under threat of having their passports destroyed.

Even under ideal conditions, working on the plantations is tough, dangerous work. Workers must carry long sickles on poles to hack off palm branches large enough to injure or kill those below. To meet the high quotas set by the companies, many workers bring on their families as helpers, where they act as unpaid labourers picking up the red pulp from the ground.

The first AP report was the most comprehensive investigation ever conducted into the industry, with workers from the majority of palm oil companies surveyed.

The report found that abuses and indentured labour were common in companies that had been given a seal of approval by the Roundtable on Sustainable Palm Oil, a watchdog organisation which promotes environmental justice and better conditions for workers.

The most recent AP investigation into palm oil plantations was much more specific in its goals, focusing on the treatment of women workers alone. The report found that women working in the palm plantations were much more likely to be abused by bosses, and found a slew of reproductive health problems endemic to the industry.

Investigators interviewed over 200 workers, government employees, activists and lawyers who confirmed that abuse, including sexual assault, was widespread across the industry.

An Indonesian official from the government’s women and children’s office in West Kalimantan province said the isolated location of palm plantations made sexual assaults common. In most cases these were perpetrated by the plantation bosses and managers.

In addition to assault, many women workers reported health problems, often the result of chemicals used in tropical agriculture. One woman said she suffered from fevers, coughing and nose bleeds after spraying pesticides without protective equipment. Another woman mourned the babies lost through late-term miscarriages after being forced to carry heavy loads. Indeed miscarriages and infertility are alarmingly common, as women are forced to wade in chemical runoff, and carry loads so heavy that their wombs can collapse.

The report also notes that despite the enormous issues facing women workers, the RSPO has never investigated reports of abuse.

Palm oil is listed under as many as 200 different ingredient names, but in New Zealand it is most often listed as simply “vegetable oil.”

Of course, not all palm oil is manufactured under the same horrific conditions as those in the AP report, but given the nature of global supply chains, it is very difficult to tell which plantation any oil has come from. This lack of transparency is a problem for consumers, companies and governments alike.

The AP report has, however, conclusively linked palm oil from the worst offending plantations to some of the most popular cosmetic, skincare and sanitary products in the west.

The companies named include L’Oréal, Unilever, Procter & Gamble, Coty, Colgate-Palmolive and Johnson & Johnson. Collectively these companies make up the majority of the $530 billion beauty business.

Cosmetics giant L’Oréal, which has long emphasised its “feminist” branding, responded to the report with a statement that it “has put particular emphasis on supporting and empowering women, who are the first victims of many of the social and environmental challenges our world faces.”

Unilever, which owns a number of subsidiary brands including Dove, Vaseline, and Continental, said “the safety of women in global agricultural supply chains … including in the palm oil industry, remains a key concern.”

It would be futile to name each and every brand and subsidiary company implicated in the report, as there is no requirement for New Zealand brands and importers to label palm oil, let alone where it was sourced. 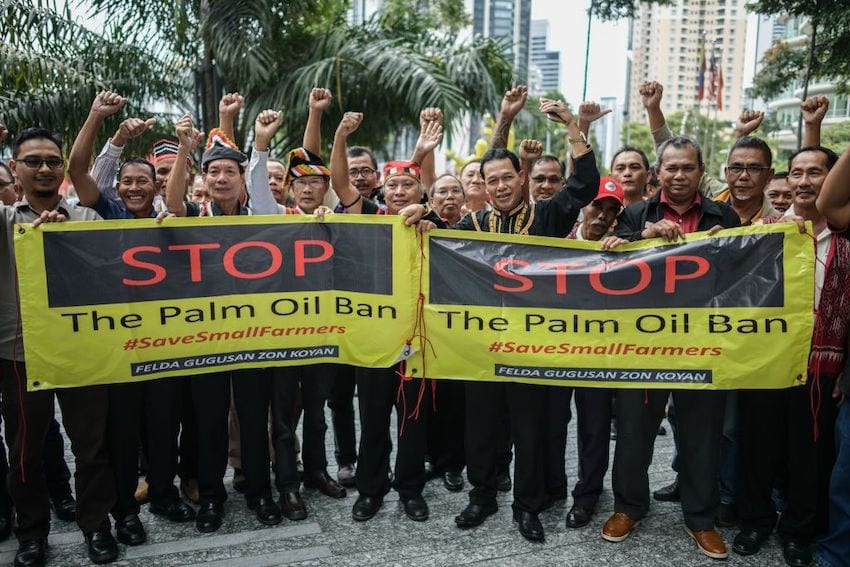 What are the alternatives?

Many New Zealanders are opposed to palm oil production in some way or another. The majority of us are in favour of better consumer information and labelling, and this move is supported by the Green Party, all four zoos, and many others.

There was initially support for a boycott of all palm oil products, initially called for by Auckland Zoo on environmental grounds, but that call was later rescinded.

Many in Indonesia and Malaysia oppose such boycotts for various reasons. The governments of Malaysia and Indonesia hold up palm oil as a factor in poverty relief, saying that small scale farmers can grow the crop competitively, and large plantations provide jobs for local communities.

The Food and Grocery Council of New Zealand also opposes boycotts, saying that other vegetable oil crops could take as much as 10 times the space of palm oil plantations, inadvertently leading to more deforestation.

The truth is complicated: it’s not about the crop itself so much as ownership. Plantations owned by monopolies which rely on migrant labour and starvation wages do nothing for locals, but those run by small-scale farmers employing unionised workers can hypothetically be much more beneficial.

As reported by The Spinoff last year, groups like Auckland Zoo no longer support total boycotts of palm oil, due to the impact it could have on farming communities. Instead, most groups advocate for better labelling, as well as forcing companies to use “sustainable” plantations accredited by the RSPO.

The problem is that while RSPO accredited plantations may be marginally more environmentally friendly, the AP report found that they were no better when it came to workers’ rights. These findings mean that activist and environmental groups in New Zealand may have to rethink their approach on palm oil, given that the RSPO has been shown to be an unreliable watchdog.

Greenpeace New Zealand is even more critical of the RSPO, calling it a “con”, set up to give palm oil companies a meaningless seal of approval.

As unsatisfying as it may be, it isn’t enough for New Zealand consumers to “vote with their dollars”. Boycotts may be counterproductive, and better labelling is only a stopgap solution. Palm oil isn’t going away, and many palm oil workers don’t want it to.

Instead, it may be the workers themselves, with a bit of outside help, who are finding a way forward. Unionisation campaigns have had some success in Indonesia, with upwards of 60% of palm oil workers in a union.

Raising the poor wages of workers on the biggest plantations, as well as better workers’ rights legislation in the two countries, may be the only real step towards an “ethical” palm oil.