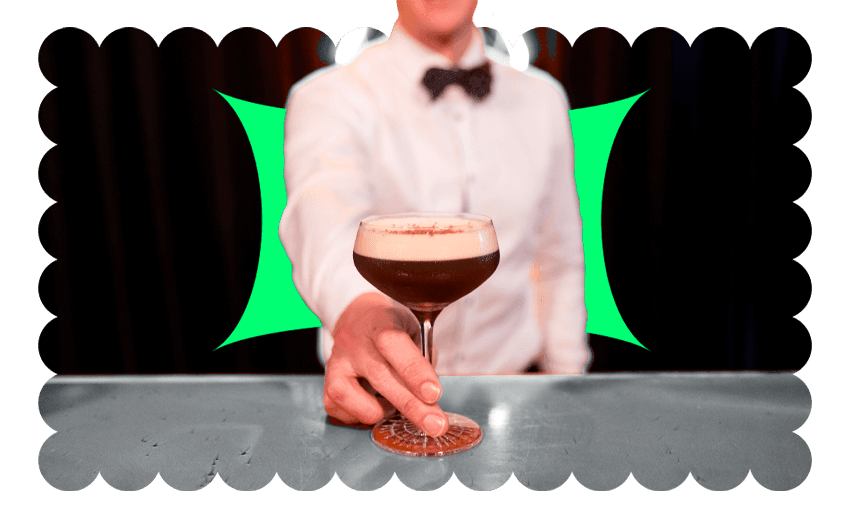 The other day, a colleague bought Frankie Walker a drink during work hours. It was 2pm on a Tuesday – yet this wasn’t unusual. “He was working on some new cocktail designs [and] he bought me a variation of a Negroni (an Italian cocktail comprising gin, vermouth and Campari) to my desk,” says Walker, the founder of Auckland-based events company Black Pineapple. “There aren’t many places where that’s legit.”

Alcohol is Walker’s life. For the past 25 years, he’s worked in a range of positions across the hospitality industry, first as a bartender, then progressing to luxury spirits ambassador for alcohol juggernaut Lion Nathan, before founding Black Pineapple in 2016. He did so after attending one function too many where drinks were an afterthought. “It made me really pissed off,” he says. He thought: “Why do the drinks always suck?”

Now, he and his six-strong team design cocktail and drinks menus to order, hosting everything from corporate functions to weddings. Walker is, as we talk, “literally surrounded by the stuff” in his Kingsland office, which also houses a small cocktail lounge. Friday afternoon work drinks often mean polishing off everything that’s left over from the week’s activities. “Life’s too short to drink shit drinks,” says Walker’s website bio.

But, lately, Walker hasn’t been touching any of it. Driven to drink by lockdowns and the stress of running a business that went from “400% growth to zero revenue overnight”, Walker realised his life was out of balance. “For me, it’s about looking at my relationship with [alcohol],” he says. “There are times I’m … using it to escape or deal with the worries I have or deal with concerns that then come back twice as hard the next day. It’s an easy escape and the next day it’s horrific, it’s even worse.”

So, about three months ago, he stopped drinking. That fresh Negroni that landed on Walker’s desk? He didn’t drink it.“I had to just say to him, ‘Look, I’m actually not drinking at the moment.’” He hasn’t given up for good, but Walker says becoming “sober-curious” has helped him re-evaluate the role alcohol plays in his life. He says he’s fitter than ever, and able to deal with stress without alcohol. “Let’s just find some new patterns of behaviour,” he says. “Let’s find some new ways to deal with stress.”

He’s not alone. After two years of alcohol dependency caused by pandemic-related stress, many are rethinking their relationship with booze. High-profile journalists Guyon Espiner and Patrick Gower both made compelling documentaries about their own journeys towards sobriety. Many others are looking to cut back: Walker cites an industry statistic that says 80% of drinkers are looking to drink less or abstain altogether. After my own lockdown incident with gin, I started doing the same thing.

That’s led to a huge rise in demand for low- and no-alcohol drinks. Some local beer companies, including Garage Project and Sawmill, say they can’t make enough zero-alcohol beers to keep up with demand. Recently, I met with Grant Caunter, Heineken’s former craft beer boss who gave up the booze and his high-flying career to start his own zero-alcohol brand called State of Play. He believes the zero-alcohol market is on the same trajectory that craft beers were before the pandemic. “It’s 2% of sales [now]. In 12 months it will be 3%, 4% in 18 months, 7% in three years…”

Caunter seems to be right. In fact, he might even be underestimating just how fast the trend has taken off. New research out today from Unleashed Software that surveyed 39 independent Australasian breweries includes a number of key findings:

Clearly, there’s money to be made out of the craze. Businesses that don’t jump on the bandwagon are falling off in a big way. “[This] research shows, pretty unequivocally, that no- or low-alcohol offerings are a very good thing to have on the books,” says Unleashed’s Gareth Berry. “It’s opening up revenue streams and changing consumer behaviour.”

That’s also been true for Walker. He and his team have formulated 0% cocktail recipes using spirit alternatives to help cope with demand during Dry July. They’ve taken off online, where he offers cocktail recipes and supplies, a pivot that helped save Black Pineapple when lockdowns began. “It’s growing,” he says. “There’s more awareness … there’s more talking about it. There’s an acknowledgement that New Zealanders come from a bad drinking culture and we understand where that comes from. I think we’re unpicking that troublesome relationship.”

Walker’s also been getting more requests to cater functions – and weddings – with fully stocked ranges of 0% drinks. The night before our interview, he hosted a function for 200 insurance industry representatives that offered alcoholic and non-alcoholic versions of the same drinks. “We had an ‘old-fashioned’ drinks trolley with a non-alcoholic whisky,” he says. About 20% of those present chose not to drink, but they still had options. “We believe that whether you’re drinking or not drinking you should still have choices and you shouldn’t be singled out to look different,” he says. “We’re celebrating non-drinkers.” I’ll drink (a 0% beer) to that.