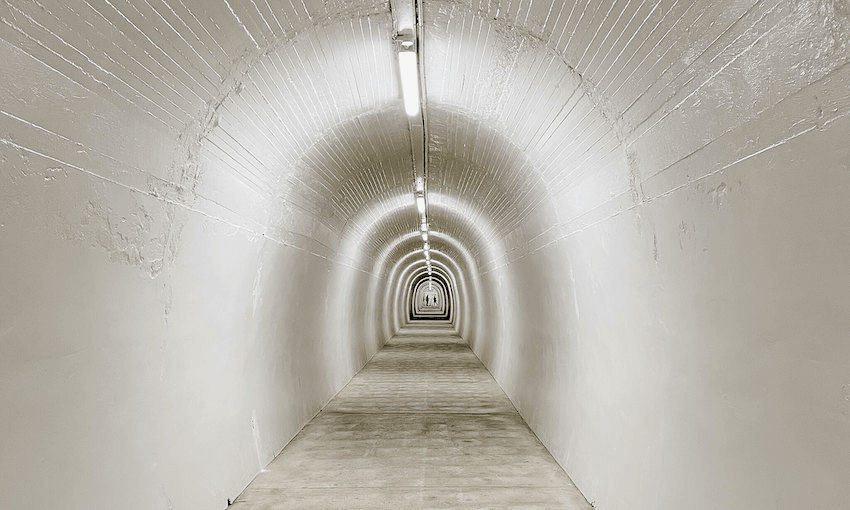 Our provincial cities had thriving public transport systems until they were wrecked in the early 1990s. Bernard Hickey visits Whanganui’s extraordinary Durie Hill Elevator to find out how (and why) we should look to the past to get to carbon zero.

I love to go exploring in places where I can lose myself in another world and time. It’s why I’m a sucker for a slow walk around a museum or a trip to an old-timey airshow. I especially like trains, planes and automobiles. It’s unfashionable I know, but I still have a soft spot for Motat.

So earlier this month I jumped at the opportunity to walk down a long white tunnel to see New Zealand’s only piece of public transport infrastructure that connects an entire suburb to the CBD of its city by an elevator. The 4,000-plus residents of Durie Hill and anyone else with a few minutes to kill can take the elevator and walk the tunnel to and from Whanganui’s city centre just across the bridge. In less than 10 minutes, anyone could walk from a very suburban suburb to a vibrant city centre, complete with galleries, cafes, shops and offices. No steps. No puffing. No clouds of black smoke.

My guide was a very Kiwi renaissance man. I’d never heard of Anthonie Tonnon until his songwriting partner and When the Facts Change podcast producer, Jonathan Pearce, told me the story of how his fellow muso had mobilised a group of fellow Whanganui residents to take over the running of the elevator. They wanted to avoid its natural fate of becoming an expensive and infrequently run tourist attraction and keep it going as a key piece of public transport. So they bid for the contract and got it. Now they run a roster to collect the fares and keep it running. Meanwhile, Tonnon’s latest album, Leave Love Out Of This, was number two on the NZ album charts this week.

The Durie Hill Elevator used to be an integral part of Whanganui’s public transport network of buses, trams, walking and cycling. It was built by the suburb’s developer in 1919 to attract customers for his version of a garden suburb who at that point weren’t able to buy or use cars to climb the escarpment to the stunning views out over the river and the city. It worked, and by 1948 it was a key part of Whanganui’s thriving public transport system and city, as shown in this guide book and timetable linking the buses and trams to the elevator.

Whanganui was not that unusual in those days in that people in provincial cities and towns mostly got around by foot, bicycle, bus or tram. This was a time when a Morris Minor or Vauxhall Victor imported from Britain required approval to buy foreign exchange worth several years of a regular worker’s pay. Even in the 1970s and 1980s, car ownership was relatively rare, difficult and expensive. They broke down, rusted, boiled over and weren’t that safe. As recently as the mid 1970s, New Zealand had fewer than 300 cars per 1,000 people.

1989 was the year everything changed

Then came year zero in Aotearoa’s political economy: 1989. The Public Finance Act and the Reserve Bank Act passed through parliament with broad bipartisan support in 1989. The driving force in these reforms was to reduce government debt, cut taxes and make users pay for as many public services as possible, including public transport. That same year massive reforms of councils and resource management legislation were launched, leading to the consolidation of 800 councils down to 87, with many seeing smaller cities and towns forced to give up control of their public transport to regional councils. Whanganui’s public transport was handed over to the Horizons Regional Council and NZTA, now known as Waka Kotahi, focused its fuel tax levies on road repair and construction. Buses and trains became services that poorer people had to use and pay for and investment in such public infrastructure dwindled. Inter-city buses were sold to private owners and Kiwi Rail stopped regular passenger train services.

The rest of the tax-paying population expected to drive everywhere, often in their newly cheap used Japanese imports. Where once a car cost multiples of annual incomes, they can now be bought for a month or two’s wages and run forever. By 2019 New Zealand had the fourth highest car ownership rate in the world, with nearly 840 cars per thousand people. Our fleet of used imports have an average age of 17 years. Nearly a million cars in our fleet of over four million cars are over 20 years old.

The broad assumption for the last 30 years was that everyone wanted to travel everywhere by car and could afford it. The public funding arrangements assumed bus and train travel was a fringe activity for a minority who should pay for the service and receive as small a public subsidy for equipment and infrastructure as possible. The contempt for public operation of public transport was soaked through the Public Transport Operating Model (PTOM) set up in 2010 by the then National government. It forced regional councils to tender out their bus and train contracts to private providers to improve the efficiency and reduce the cost to taxpayers.

It worked, but at the cost of pressing down on wages of drivers. That has backfired awfully in the last couple of years in Wellington in particular, where driver shortages have destroyed the frequency and reliability of services.

Only in the last decade have the attitudes and funding arrangements started to change, and then largely only in the biggest cities and Auckland in particular. The creation of the “Super City” that allowed better coordination helped, along with the very belated admission by the John Key-led National government that it needed to help fund the City Rail Link.

But we won’t get to carbon zero with the current business-as-usual funding arrangements for public transport, which are still heavily biased to cars and trucks on roads.

I spoke to transport minister Michael Wood for the podcast and he outlined how a review of the PTOM model would look at how to improve public transport and prepare for the big switch away from cars to walking, cycling, buses and trains. It will require massive public investment in new electric buses, along with the reconfiguring of roads for cyclists and pedestrians.

It will be politically hard, but is the only way to get to carbon zero by 2050. It will require new ways to fund public transport, a shift in the share of funding from roads to rail and buses, and heavy investment in new capital in the form of fleets of buses, new stations and new cycling networks.

The NZTA and fuel tax levy model used at the moment won’t be sufficient. Neither will the current restrictions on council funding mechanisms to rates and the expectations that councils should pay at least half the subsidies for public transport. Essentially, a just transition to carbon zero will require old, richer and more suburban car drivers and home owners to subsidise younger, poorer, public-transport-using renters who live closer to the centres of towns in apartments rather than standalone homes.

It will be a new world that in many ways will be an echo of a very old world.