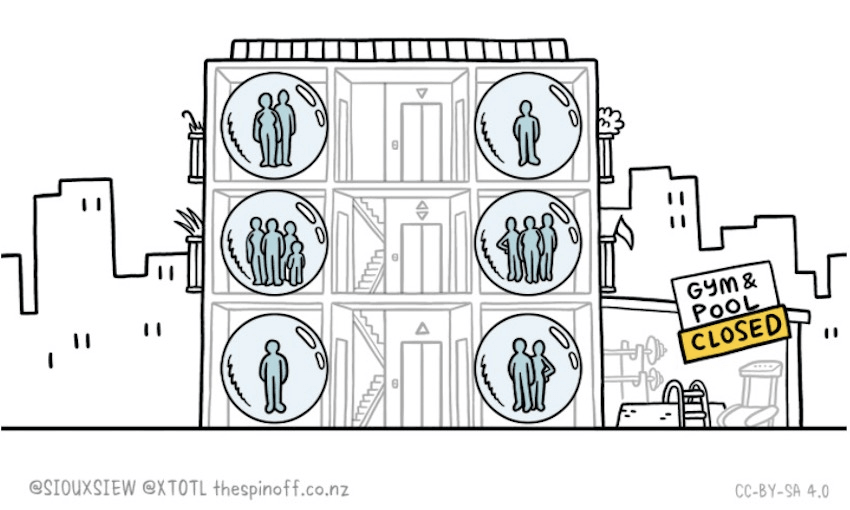 How to deal with lockdown when you live in an apartment

Between the narrow hallways, shared lifts and cramped living quarters, apartment living in lockdown presents its own set of challenges.

As New Zealand’s level four lockdown continues, people who live in high-density housing are continuing to face their own unique challenges in preventing the spread of Covid-19. Apartments often feature shared entrances, hallways and lifts, which can make it difficult to avoid contact with other people, exacerbated by there being less space in general for kids and animals to stretch their legs.

All of this poses extra risk in the middle of a pandemic. Dr Joel Rindelaub, an aerosol chemist at the University of Auckland, says that people who live in apartments should be taking extra care when moving through shared spaces in their buildings. “This dirty delta we’re dealing with is definitely airborne and that seems to be the primary route of transmission, so those would be the biggest areas of concern,” he says.

“As we’ve seen in the report that came out last week, at the Jet Park quarantine facility there were people with doors open across the hall for three to five seconds and, boom, that was enough to allow delta transmission to occur.” He recommends that if you are living in an apartment, treat your movements with as much caution as if you would in MIQ.

That means wearing a mask whenever you leave the apartment, avoiding sharing the lifts and the hallways with others, and using the stairwell if it is possible and accessible. It might also pay to keep an ear out for your neighbours, says Rindelaub. “If your neighbours are opening their doors, make sure you aren’t doing that at the same time or even shortly after to prevent air transfer between rooms.”

While little can be done to control the recirculation of air through ventilation systems in your building, Rindelaub recommends cracking the windows whenever possible to circulate fresh air into your space. “That’s the safest way to play it – keep your windows open, try and leave as few times as you need to, and designate the same person to do the grocery run,” he says.

When interacting with high-touch zones such as lift buttons and rubbish bins, disposable gloves can be worn for an extra level of protection. It is also worth inquiring to see what measures your management is taking to keep people safe. In a note slid under doors of an inner-city apartment in Auckland, residents were assured that shared areas would be sanitised daily under level four, but The Spinoff understands not all buildings are undergoing the same treatment.

Outside of delta considerations, there are also daily challenges in keeping kids entertained who might otherwise mix and mingle with their neighbours across the hall, or in a communal outdoor space. Alice, a single mum with an 11-year-old son, lives in an apartment in Auckland with a shared garden. Last lockdown, the pair lived in a two-bedroom house with a front yard.

Apartment life in lockdown has offered unique challenges, such as balancing screen time and exercise, and benefits, like frequent small conversations with their many neighbours – from across their balconies at a distance. “Being able to see people frequently throughout the day is really good for you. Instead of holding it all back for the end-of-evening conversation, you dissipate it in small bits… those conversations about what’s good and what’s hard is helpful.”

Louise, who lives in a two-bedroom Auckland apartment with her partner and their six-year-old daughter, is finding communal spaces like shared stairwells difficult to negotiate, as well as the lack of soundproofing within their apartment. “Just not being able to get any head space or have any space to feel calm. On day two I woke up early and thought I’d get up and work for an hour, but because our apartment is so small and so porous it’s impossible to not wake everyone else up.”

She says that she and her partner each take their daughter out alone once a day, so the other parent can have the apartment to themselves, even if only for half an hour. “Then we each go out for a walk on our own… Well, most days. But then I was remembering how last lockdown we didn’t go out for enough walks together, so we have to remember to do that.”

Like most parents, she feels like she isn’t quite getting the balance right. “That feeling of… I’m doing a crappy job of everything. I don’t know if being in an apartment makes much difference to that. But the proximity to other people can stress you out. Apartments sort of intensify that feeling of not being able to escape.”

Both agree that having an only child makes it much harder to meet their physical needs; they aren’t able to exhaust themselves to the same degree as they do through play with other kids, and not having a yard means they have to be supervised at all times. “They can’t go on the playground either, which makes it hard. Walking isn’t a very natural kid thing to do,” says Alice.

“That’s why bike riding is so good,” says Louise. “It’s really awesome for kids, they can ride on the road, which is a real thrill.” Alice says she’ll consider bubbling with another family once it’s safe to do so in level three. Until then, she says, they’ve ridden the “roller coaster” before and will muddle through again – with the socially distanced support of their neighbours.

You can reduce the risk without totally ditching your dining-out habit.
By Charlotte Muru-Lanning
Staff writer
20th July, 2022

Siouxsie Wiles & Toby Morris: Can we get off the Covid merry-go-round?

Yes – if we ramp up our efforts to break the dangerous cycle of infection and reinfection.
By Siouxsie Wiles
Contributing writer
19th July, 2022

How are Australia and NZ managing the Covid wave – and is either getting it right?

A pair of Covid experts from either side of the Tasman compare and contrast the two nations' approaches.
By Tony Blakely and Michael Baker
Guest writers
15th July, 2022

The case for masking up while dining out – yes, still

Despite Covid-19 surging, we're getting lax with our mask-wearing while dining out. Is it time to fix that?
By Charlotte Muru-Lanning
Staff writer