Stuck in another gloomy London lockdown and missing home, five New Zealand friends decided to bring a pastry-bound piece of Aotearoa to the people.

A group of Kiwi mates were tucking into a steak pie in their London flat when it struck them that the British equivalent of the New Zealand classic wasn’t up to scratch.

With the grey Friday afternoon ahead freed up by a lack of work and the UK’s seemingly endless third lockdown, they decided to dig out their aprons and prove they could do better.

Four from five of the group, who range in age from 26 to 28, had been either fully or partially furloughed (put on temporary leave by their employer) for a large chunk of the last year.

“So, the motivation was a mixture of having a bit of spare time on our hands, having always wanted to start a business, and feeling a bit homesick,” co-founder Stephanie Armstrong, 26, says.

Armstrong’s flatmate Katy Loudon, 27, says the brainstorm that January afternoon led to a debate around recipes and a grocery run, before they cranked the oven for the first of many test kitchens. The first concoction was an early version of the “Katie Pie” – a vegetarian spin on the classic mince and cheese that they instantly knew they needed to share with the rest of London’s homesick Kiwis.

“I was cooking up some mushrooms that resembled a kind of mince, and Hughesy was tootling around the kitchen, yelling with excitement that we’re going to make a pie business,” Loudon recalls.

After the initial idea was hatched back in January, the aforementioned Michael Hughes, another flatmate and business partner, says the division of tasks happened organically.

“We play to our strengths, and then everyone else chips in and has their own ideas.”

Loudon typically manned the vegetarian cooking, while Thomas Mills, a chef currently on furlough, took on the meatier recipes. Mills, a chef at New Zealand cafe Ozone, has had a rollercoaster of a year as the business opened and shut its doors three times in accordance with the various lockdowns.

Armstrong was in charge of the website and marketing, Hughes was on analytics, operations and tech, and flatmate Andrew Pearson did logistics, strategy and accounting. Michael Hughes and Andrew Pearson about to tuck in (Photo: Supplied)

A little more than a month after its conception, Friday Pies has sold four batches of puff pastry pies and the team are in their second week in their new home: a commercial kitchen in north-east London.

Each Sunday, at 6pm sharp, a new menu goes up on the Friday Pies website and is promoted on Instagram.

Each week the offering features both meat and vegetarian options, ranging from the classic mince and cheese to the Japanese-inspired “Sumo” – a potato and cauliflower katsu curry pie.

For the past four weeks the pies have sold out within a couple of hours, leaving the team with first dozens, then hundreds, of pies to cook, package and distribute to their customers via bike deliveries and a click-and-collect style system running from their flat. Andrew Pearson packages up a load of the Katie Pie at the new Friday Pies HQ, a commercial kitchen in north east London (Photo: Alice Peacock)

They had come up against a couple of growing pains while expanding production; Loudon said they weren’t able to find a supplier who could provide the flaky puff pastry crucial in the construction of a true Kiwi pie in the right format and quality.

“None of the wholesalers did it, but we found a really good bakery that will roll it out for us,” she says.

“That’s been a bit of a struggle being in a different country, not knowing where to start with some things and not having the contacts.”

There are “big plans” to scale up further, though Hughes says they needed to ensure they have the processes down pat before taking on the next step.

“We’re looking into things at the moment in terms of extra kitchen space, extra storage space, all those things that need to come together at once to enable us to scale up in a big way.” 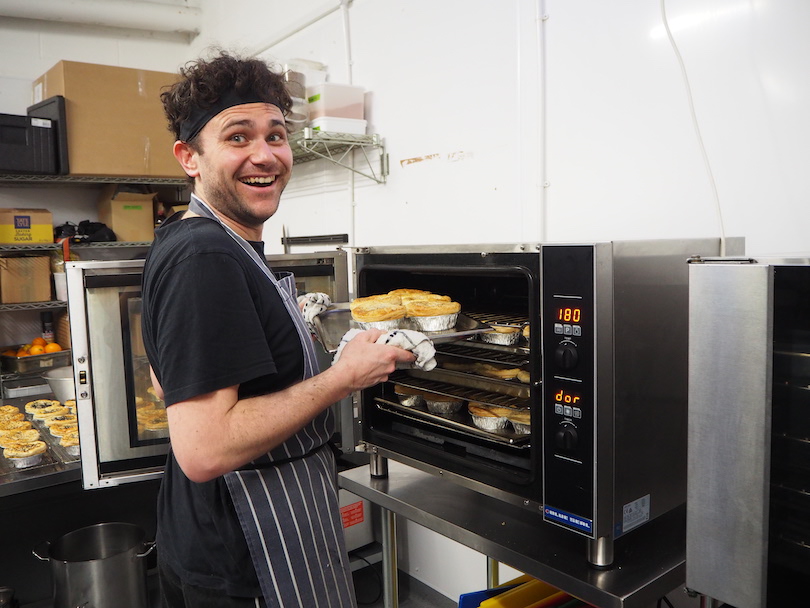 Thomas Mills pops a batch of pies into the oven (Photo: Alice Peacock)

The group has also talked about starting a pie window or getting a pie van to “hoon around London in” to extend their reach.

Scaling up, as well as getting the word out, has been enabled by the skills within the flat, and their wide network of friends locking down in various houses over the city.

“It’s quite good having all the fingers in all of the pies,” Loudon laughs.

The team is gearing up for British Pie Week, which starts today, with plans for a competition enabling customers to vote for their favourite pie. They’re also looking at trialling a subscription service.

The business is here to stay, Pearson says, lockdown or no lockdown. They have set it up in such a way that they can mould operations, cooking and deliveries around their full-time jobs, once Boris opens the country back up for good. 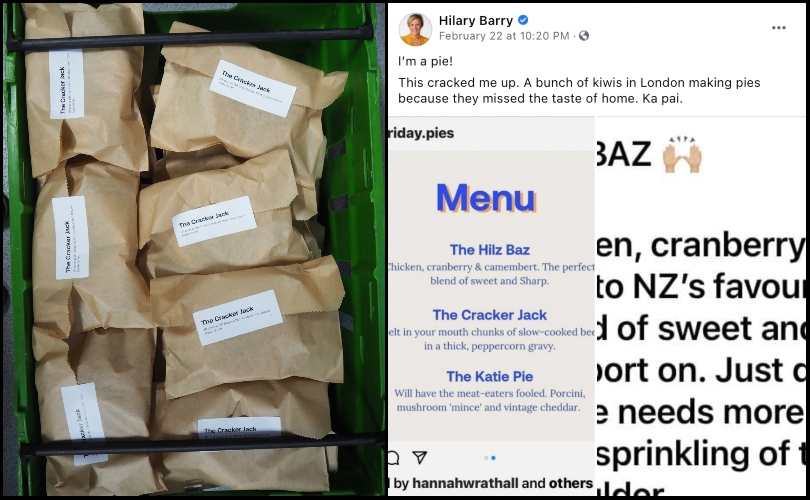 A load of pies ready to be delivered, and Hilary Barry’s shoutout (Photos: Alice Peacock/Supplied)

Hughes says they all “lost it” waking up on Tuesday morning to find they had received a shoutout from Hilary Barry, after dedicating a pie to her on their latest menu.

“With a perfect blend of sweet and sharp there is plenty to report on. Just don’t tell this classy lady she needs more pastry.”

Barry posted on Facebook, sharing a screenshot of the dedication, which she said “cracked her up”.

In turn, Loudon says the team is “chuffed” that Barry was on board with the venture.

“Next stop Jacinda, I think.”