Off-the-shelf, ready-made sauces and recipe bases changed how New Zealanders cook forever. Against her therapist’s advice, Leonie Hayden dives deep into her childhood to look back on some of the most iconic Kiwi kitchen staples.

In retail speak, they’re called FMCGs – fast-moving consumer goods. We know the jingles as well as our own sweet mother’s voice – “Thanks Pataks!” “I feel like Chicken Tonight!” “My mum’s a Maggi mum!” “You’ll wear the Dolmio grin”. Stick. It. In. My. Veins.

Whether you call them recipe starters, instant meals or meal companions, they’re the supermarket staples that pulled New Zealand kicking and screaming out of the 70s and introduced us to exotic foods like “spaghetti bolognese”. The post-WWII parade of brown-grey chops, mince, sausages, and stews with a pile of white bread, spuds, and a limp boiled vegetable suddenly became exotic, over-cooked stir fries. Carbonara? Just add hot water, bud. Weeknight meals became so easy even Dad could make them hahahaha it’s so funny how little household labour dads are expected to do.

Sausages and veges thru the 90s, then as far as I was aware, Asian food was invented around 2001, and that became the main thing (mainly kantong stir fry or pataks curry)

It’s not like we became a country with a refined palate overnight as a result, oh no no. I can only apologise to every kid from a migrant household being sent to school with delicious, flavourful, homemade cuisine that was made fun of for being different. Imagine thinking luncheon sausage aka anus paste sandwiches were OK but not a delicately spiced dhal, or hummus. We’re disgusting goblins and we should be ashamed. But for better or worse, this is what we eat in post-Victorian, post-world wars, post-globalisation New Zealand (and Australia, Britain and Canada). Coloniser cuisine, if you will.

I started cooking at a young age, to help my mum out, but mostly so my greedy ass could choose what we were having for dinner. It was thanks to a lot of these products I eventually learned how to make the real thing. Yes, these rankings will be contentious. They are not comprehensive, or based on any robust scientific method but are entirely influenced by my own tastes, upbringing and sexual attraction to dads who like beef noodle soup.

Look, I’m loath to judge any of these food stuffs too harshly – I’m aware, as I’m sure Wattie’s is, that they’re not the shining example of whatever meal they’re trying to recreate. But someone has to be at the bottom and the Just Add range… is gloopy kaka in a can. Kaka can. Bad vibes. Every soup ever commercially manufactured likes to remind you that it is “it’s the perfect base for a casserole”. We get it!

I made the mistake of buying the Campbell’s chicken soup once, mostly for the iconic can, but it may well have been from Andy Warhol’s personal stash because the small cubed pieces of “chicken” tasted like drywall from a Cold War bunker.

Australian brand Masterfoods launched the Kan Tong range in 1976, inspired by the influx of southeast Asian migrants to Australia. New Zealand of course came around in the 80s, and standard weekday meals were suddenly transformed by flavour! Namely sugar, the second or third ingredient listed on every Kan Tong cooking sauce. No shade – both sugar and MSG have been unfairly maligned in western cooking, probably because we have problems with regulation (hello insane portion sizes and and an obsession with thinness that has caused pandemic levels of disordered eating) and haven’t figured out the sweet spot (heh) of using sugar to enhance savoury meals. Does Kan Tong find that balance? Hell no, it’s a candy-flavoured nightmare.

12. MasterFoods all the things

Maggi may have the name recognition, but MasterFoods does a yuuuge range of recipe bases and cooking sauces, and they do all the herbs and spices and own half the brands mentioned here. Their recipe bases are a slightly-too-sweet survey of the globe – beef stroganoff, Thai green curry, chow mein and cottage pie stand proudly shoulder to shoulder – proving they truly are the masters of food. Or at least some kind of regional manager.

Nearly all of these leave a slimy film in your mouth, but you know what? It’s OK to be turned on by how the dad says “beef” in this ad.

It’s rice so nice they named it twice! Like “chai tea” before it, rice risotto means “rice rice dish” but confusingly, the rice in rice risotto isn’t arborio rice, typically used to cook risotto, but a long grain rice mixed with risone pasta. It comes in such traditional Italian flavours as “Chinese” and of all the instant meals, does the very least. The art-pop, David Byrne-esque jingle, however, is killer and should absolutely have been released as a single. Release the single, you cowards.

There is nothing exceptional about Chicken Tonight (although I admit I went through a real honey mustard phase) but it gets bumped up the ranking because it comes with a banging tune and its own dance.

Spare a thought for this woman who absolutely does not get paid enough to deal with her boss suddenly becoming possessed by unseen dark forces. 8. Maggi Cook in the Pot

Ah, the English language. Cook in the Pot is the best example of saying what it does on the box since the North and South Islands. You add flavoured powder sachets to your food, and cook it in a pot. If only they specified to Eat From the Plate – it makes such a mess of the table.

The devilled sausages, apricot chicken and cottage pie flavours are a ubiquitous presence in New Zealand households – the devilled sausages especially remind me of my nana. She added apple to hers, to which I remember thinking as a barely sentient toddler: “Fruit in dinner! Now I’ve seen everything!” Unsurprisingly they’re mostly yeast extract and corn starch, although the cottage pie mix surprised me by including ginger, garam masala, cinnamon and nutmeg. Go you spicy lil bitch!

What westerners call Indian food is only the tip of the iceberg for the many and varied cuisines that are actually consumed in India, and in fact some of your favourites, like chicken tikka masala, were invented in Britain. But the western-favoured meat and vegetables slow-cooked in a creamy, spiced sauce is undeniably delicious, and the Pataks range (founded by the Pathak family in the late 50s) actually outperforms a lot of takeaways I’ve had from restaurants.

Of course I’m going to prefer chaat or a tasty dhosa, but butter chicken is unequivocally yum. It’s made of butter! Thanks global conglomerate parent company that now owns Patak’s.

Huge nostalgia feels for this – a gargantuan pot of mum’s vege soup was a mainstay on the stove in the winter months, getting progressively thicker and tastier as it was reheated night after night. There are no measurements, just some soup mix, any veges you can find and a bacon bone or a ham hock. I always think of it as the kind of densely nutritious food you’d give to someone on the brink of starvation.

Some version of this mild but incredibly delicious flavoured cube is found in every kitchen cupboard in Japan, and growing ever more popular in New Zealand. It’s a very glossy, dark curry that’s good with only a few basic ingredients – just onion, carrot and potato is your winter weekday meal sorted – but serve it on pork or chicken katsu and you’re soaring.

Thursday nights at my house were karate practice, which meant dinner had to be quick and easy. My absolute favourite of the regular rotation was my own invention, creamy tuna pasta – a Continental pasta packet (sour cream and chives or alfredo flavour) with a can of tuna mixed in and sliced boiled egg on top. Yeah, I did that and I thought I was Gordon fkn Ramsay.

It’s very satisfying to see that more than 20 years on the packaging hasn’t changed at all. Continental pasta can be substituted with the San Remo brand but somehow their red packaging makes it taste worse. I don’t know why, science!

MasterFoods followed its Kan Tong success with the Dolmio range in 1989, making Italian chefs out of everyone who could boil spaghetti and open a jar. What a revelation Italian food was to our drab palates! The brightness of the marinara, a springy noodle, smothered with cheese. Ugh. Now we all know how to make marinara, Dolmio’s sauces are fine, whatever, but the cultural impact is undeniable – from the jovial nonno in the ads (who had some kind of horrific accident that turned him into a puppet), to the iconic “Dolmio grin” to the particularly filthy joke it became a punchline for (you know the one). 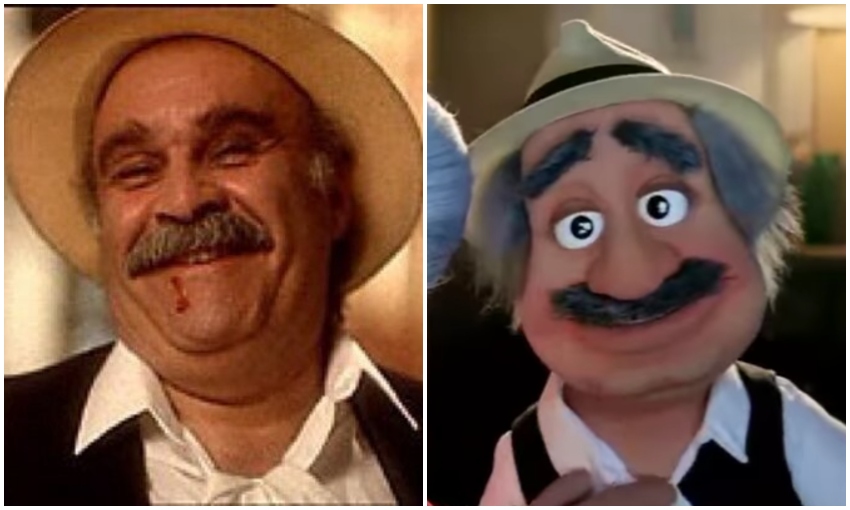 L: Papa Dolmio laughing at a dirty joke R: After his terrible accident.

Crunchy crunchy stuff of dreams. Sorry to the Colonel, but it might be my favourite c-fry. You don’t even need to dip your fryable in egg first, this stuff just sticks to everything. Add in crushed cornflakes and you’ve got karaage. Add in breadcrumbs and you’ve got… crumbed stuff. When I die please crumb-coat me in Diamond Coat n Cook and lower my carcass into a hole filled with hot fat. 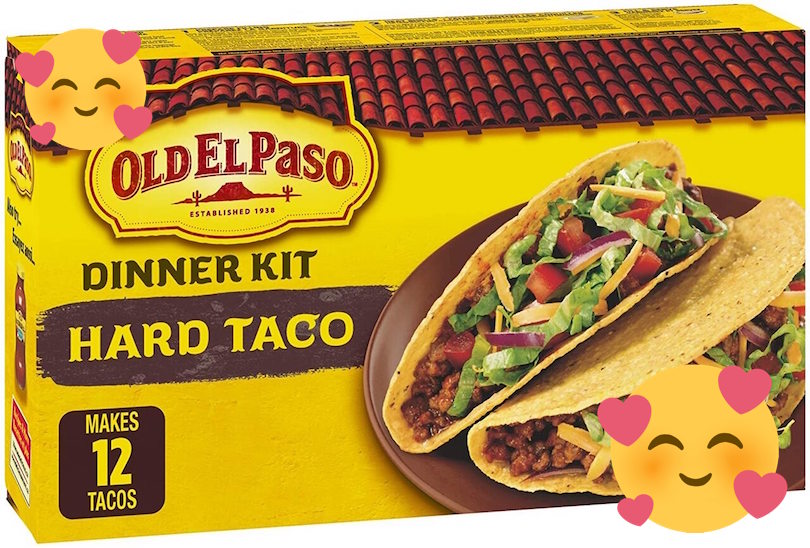 I remember the first time an Old El Paso taco kit passed through the doors of my home. I was about 10 and in charge of cooking the meal that night. All the tiny elements were magical – small bowls of chopped lettuce and finely diced tomatoes, the little packet of salsa, the flavour sachet. Grated cheese! It was the science experiment of my dreams and I was Dr. Frankenstein, mad with the power of creation. I’ve since learned how exquisite a taco from a proper taqueria is, but nothing will erase the magic of that first night, the joy of six ingredients burning an oily path down my chin and back onto the plate, only to be scooped up again with those golden shards.