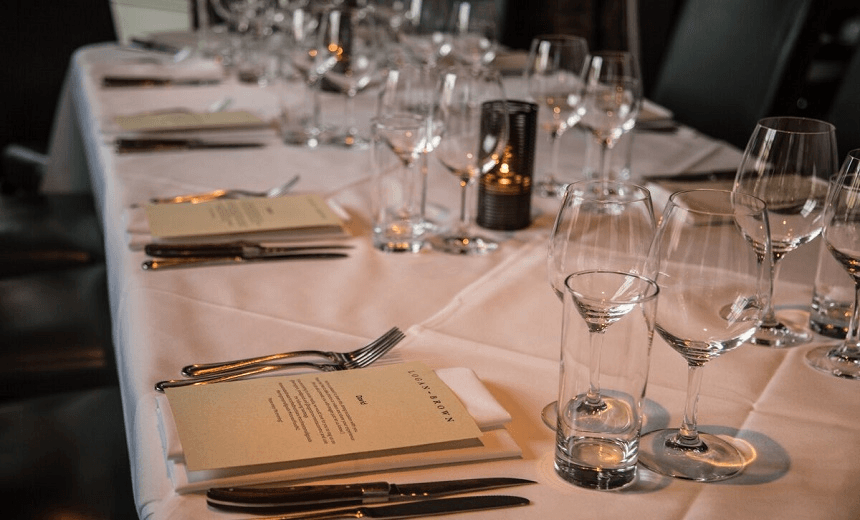 A bogan and a vegetarian eat some meat at Logan Brown

Logan Brown and Harrington’s Small Goods invited Emily Writes to eat at their fancy as place.

When the invitation landed in my inbox, as soon as I saw “Logan Brown” I RSVPed faster than a very fast thing. I called my husband immediately and said “We’re going to Logan Brown”. He immediately said we can’t afford to – and I took great delight in telling them that I had a golden ticket and somehow, in a very confusing turn of events, I’d been invited to dinner there. I wondered if they had the wrong Emily, but I certainly wasn’t going to question my good fortune.

My husband, a bogan on the outside and the inside, has always had the motto that a free meal is the best kind of meal, so we began counting down the days till our fancy dinner. Maybe, if I’d been a better influencer and actually read the invite, I would have seen that we were being hosted by Harrington’s Small Goods. They’re like a butchery.

I found this out almost immediately after we arrived, having dumped the kids at Nana’s, and raced into the fancy digs of Logan Brown. My 90% carnivore husband was thrilled by this development. Me – not so much. I’m a vegetarian.

This was quickly forgotten as we whispered to each other about how fancy the wine glasses were and how nice the bubbly tasted. It tasted like the bubbly rich people drink. My husband whispered “I can’t believe we get free booze”. He was in awe of the ladder the bar tender climbed to get wine. “It’s like a wine library!” I marvelled at the bar top which had tiny crayfish INSIDE IT. For a second I wondered if the atmosphere was traumatic for them – I thought about shots being slammed on the table and ‘Pony’ reverberating through the place,  then I remembered where we were. It’s unlikely they play anything other than classical music at Logan Brown. And they probably don’t have shots.

As I pondered the crayfish babies, we were ushered to a room upstairs.

I didn’t even know this room existed. We had been to Logan Brown just once, when our youngest child was three. It was a harrowing experience, a family birthday dinner where we spent the entire time trying to shush our child and keep him under control. We hadn’t wanted to bring him but the aunties had insisted it would be fine. All I remember is the stress and spending a significant portion of time outside trying to control our kid.

Here we were childless and we weren’t paying – a dream come true. The table had multiple wine glasses and knives and forks and my husband asked which knife we were meant to use – as if I’d know. We were starving, used to eating at 5pm with the kids, and it was now 7pm. Our handsome waiter outlined the menu and I understood around 10% of what was on it. When it arrived, it was what I can only describe as assorted meats.

I asked Angus Black, the big chief guy of Harrington’s, about how they sourced their meat. The piggies are free-range. All from New Zealand. And Angus (who in my head I kept giving the last name Beef) said he’d visited the farms himself. It’s described as “world-class ethically farmed ingredients in New Zealand, sourcing the best 100% New Zealand pork and beef from the best producers, who put animal welfare first”.

I put my vegetarianism on hold like the terrible vegetarian I am.

I ate the Whangamatā scallop. I don’t like scallops. But I liked these scallops. The black thing on top of them was amazing. I asked what white pudding was (served with beetroot gratin and bush herbs). It is pork and milk – sounds legit. I ate it. It was delicious. I was then told what black pudding was and decided it was a bridge too far for this newly lapsed vegetarian. That’s when my husband pointed out I’d already eaten it. It was the black thing on top of the scallops.

The eel was not something I wanted to try but as the saying goes, when in Rome, eat everything that they put in front of you. The eel was exquisite. One of the best things I’ve ever eaten. I ate my husband’s eel as well. He told me when he got home that having eel forced into him on the marae by the aunties meant he’ll never eat eel as an adult. Despite him unfairly calling it “dirty meat”, I thought it was amazing. I was told the eel was from Northland, from a family company.

Throughout the night we were told where each part of our meal came from. A big part of becoming vegetarian for me was about not knowing how my meat came to me – where it’s from, how the animals were slaughtered, what was actually in it. It was really great to hear the passion the Harrington’s guys had for sustainability and animal welfare. In times where we have feed lots and other totally unconscionable practices in animal slaughter in New Zealand, it felt good to know some folks were trying to turn the tide.

My notes from the rest of the courses were less legible the more my wine was topped up. Wine was matched with each course (how do people not get smashed?) My notes – “falafel tasted falafelly”– are likely not that helpful. The menu said: wood-grilled merguez sausage, cauliflower falafel.

Noah, our lovely wine guy, talked to us about the red something Italian word from Tuscany. My husband nodded, as if he doesn’t order “the cheapest red” everywhere we go. I sniffed the wine and said mmmm. But I couldn’t smell anything.

We delighted in the giant wine glasses.

Out next came a giant sausage. I don’t know how else to describe it. At first I thought it was a big croissant or something. I mean, I had no idea what most of the things were on the menu (every time I tried to pull out my phone my husband kicked me in the shins), so don’t blame me for that. But it was sausage. A big windy fat sausage. I really thought I couldn’t eat any more meat but it was amazing. I asked my husband how I should describe it and he said “really good”. The menu said it was: Toulouse sausage, white and black garlic, pickled red cabbage and mustards.

The bread was like no bread I’ve ever tasted. Made at Logan Brown, it was just incredible. Even the butter was fancy. I went to the bathroom and they had little hand towels instead of paper towels. You know shit is upmarket when you don’t have to use bog roll to dry your hands.

Unfortunately, by now we were creeping past 8pm and I knew we needed to get home to the kids. We would have to miss the milk-braised porchetta, gorgonzola polenta, green lentils, alliums. I may never find out what alliums are. But we will forever remember the Purple Dawn kūmara rēwena pastrami reuben. It was to die for.

We said our goodbyes and I took a bag of meat home (literal meat, not my husband). It had been a lovely meat party and I was already sad to be back on the vege bandwagon. My husband was in heaven.

We carried the kids to bed and my husband unpacked his meat. He poured himself a glass of medium red cask wine, $9 for a litre at PakN’Save. The evening had already turned him fancy.

“I can taste the tannins,” he said.

What the hell are tannins?

“I dunno, I heard someone say it.”