Two friends are broadening ice block lovers’ expectations of the classic summer treat with their unique fruity combinations, all handmade on the Kāpiti Coast.

Amy Delahunty and Chrissy Vize have been friends since they were 13 years old and their lives have constantly intersected with each other. They went through high school and university together, then went on to flat together and later, travel together. More recently the pair found themselves living in the small Kāpiti Coast town Paekākāriki, now the home of their shared ice block business, Paekākāriki Pops.

“Our friendship has always been centred on food,” says Delahunty.

While living in Melbourne, Vize spent three years making real fruit ice blocks and selling them at local markets. When Vize moved back to Paekākāriki, the two friends teamed up and made a batch of ice blocks to sell at a play centre fundraiser. It was an immediate success – “people really loved them”, says Delahunty.

For the last three years, the two have turned pop-making into a serious operation that each balances with parenting. Everything from making the ice blocks by hand, to wrapping them in their compostable food wrappers, to passing them out to clammy customers at festivals is done solely by the pair. The business has grown to the point where they have their own premises and their own mobile ice block stand (they’ll be parked up at The Spinoff-sponsored Garden Party festival at the Wellington Botanic Gardens on February 20-21), and they’re stocked in grocery stores and cafes from Ōtaki to Wellington.

Each icy treat is handmade by the pair at their Paekākāriki premises, where a special ice block machine freezes the blocks in just 25 minutes – the quickest part of the process, says Delahunty. These definitely aren’t your childhood handmade – orange juice poured into an ice-cube tray with a toothpick stick – ice blocks though.

Their offering is all vegan, dairy-free and gluten-free and based on experiments with fresh, seasonal produce. There are flavours like plum and vanilla yoghurt – a crowd favourite – ginger, lime and lemongrass, which Delahunty describes as a “pimped out lemonade ice block”; and a sugar-free orange and passionfruit. Notable is their most controversial flavour, avocado and lime. It’s a taste that’s a pleasant surprise to almost everyone who tries it, says Delahunty. And while avocado may be an unusual popsicle flavour by New Zealand standards, it’s a standard among traditional Mexican ice blocks, called paletas.

Both Vize and Delahunty’s children, who unsurprisingly still aren’t over the thrill of eating ice blocks, are in charge of quality control. They taste every new flavour before it hits the market, under their role as “special taste-testers”. Experimenting with new flavours is one of the perks of the job for the pair. It’s a source of constant discussion and brainstorming.

“We have a lot of time to talk because we’re chopping up fruit all day,” says Delahunty. 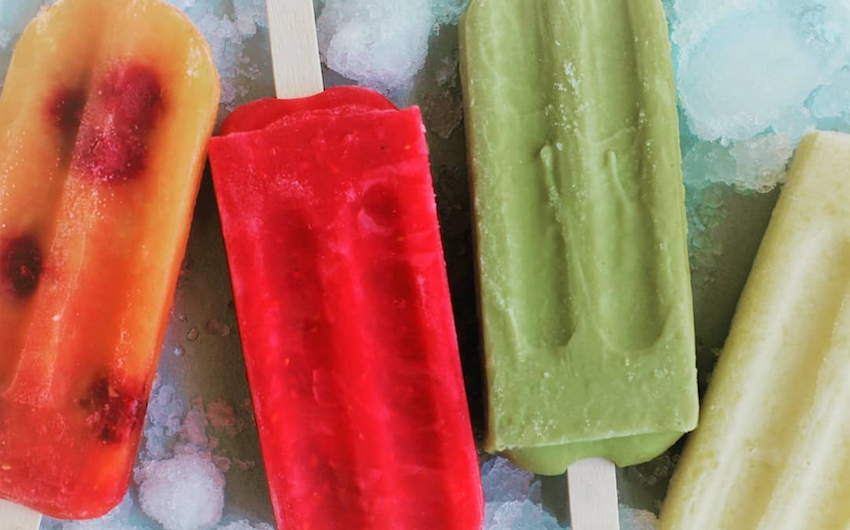 PAEKĀKĀRIKI POPS, INCLUDING ONE OF THEIR MORE UNUSUAL FLAVOURS, AVOCADO AND LIME (PHOTO: SUPPLIED)

The manufacturing process involves blending whole fruit but leaving it unstrained, creating a textural experience that’s considerably different to the classic lemonade popsicle found in your dairy’s freezer. They’re creamier, prettier to look at and far more wholesome. Using whole pieces of produce also means that there’s less waste involved, and anything that does happen to be leftover gets composted.

Paekākāriki Pops joins a growing lineup of local real-fruit popsicle makers in Aotearoa. There’s clearly a market for them, and for good reason. Beyond the inclusive nature of ice blocks that are inherently easier to make for vegans or people with different dietary requirements, science is on the side of the ice block. Ice blocks are superior to ice creams when it comes to hydrating and cooling you down. Put simply, the ingredients in ice cream usually take a lot more work for your body to break down – and that process ends up making you hotter. So, ice blocks are literally the cooler option.

The affinity that people in Aotearoa have for ice blocks is something that Delahunty and Vize are very much aware of and keen to honour. Even the branding and shape of each pop is “a little nod to classic popsicles,” says Delahunty. We all know the essential summer ritual of grabbing an ice block on the way home from the beach. That familiarity makes the pop the perfect vessel to experiment with flavours that many of us ice block eaters are less accustomed to, says Delahunty.

“It’s fun to be expanding people’s expectations of food.”

The Paekākāriki Pops food truck will be parked up at the Garden Party at Wellington Botanic Gardens Ki Paekākā for both days of the festival, February 20-21, alongside dumpling and noodle food truck Mao and Co and the Wildflower Coffee cart.

The Garden Party is a new summer festival celebrating talks, food and music in Pōneke. Brought to you by The Spinoff and Verb Wellington. Entrance free or by koha. More information.