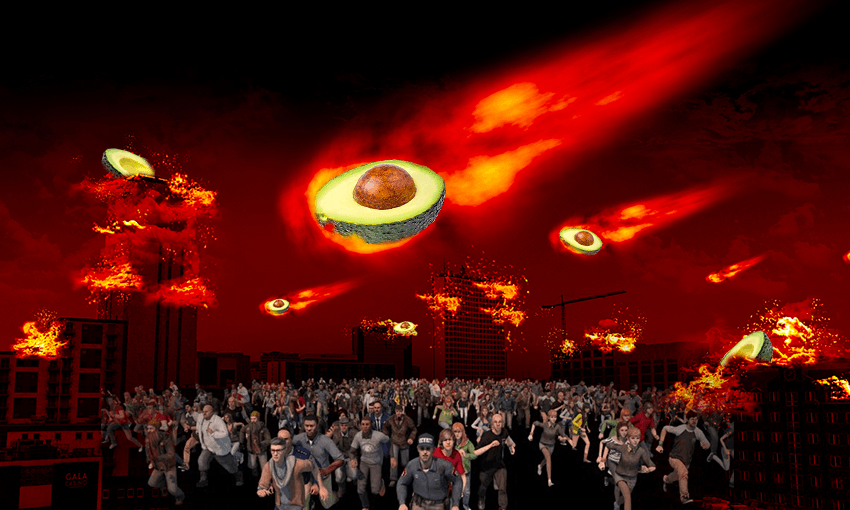 Calm down, people: avogeddon is not upon us

Do you lose your shit when you can’t get cherries in July? No. So why is everyone grumbling about the so-called avocado shortage?

“AVOCADO CRISIS”, the headlines scream. “Soaring prices force cafes to stop selling avocado dishes”. Yes, apparently New Zealand has been brought to its very knees by an unprecedented shortage of the fleshy millennial favourite. Will the proud institution of brunch survive this crisis? What will Gen Z spend their house deposits on now?

Google ‘NZ avocado shortage’ however, and a curious thing happens: suspiciously similar headlines appear from around this time last year, and the year before, and the year before that. The avocado-drought-induced crime wave of 2018 made The New York Times. In 2016, the Guardian reported on a similar spate of avo theft, fuelled by a blackmarket that had sprung up in response to surging demand.

Because you know what? There’s this thing called SEASONS. Hass avocado, the most common commercially grown variety in New Zealand, is in season from August to February, or thereabouts. After that, avocados are in short supply and therefore get more expensive. It’s just what happens. I’m sorry, I don’t make the rules. It’s nature, innit.

Apparently this year is a bit worse than most, but it doesn’t take a horticultural genius to see there’s a pattern here. Also, we don’t import them for biosecurity reasons, so there are no nice shiny foreign avos dripping food miles on the shelves. (Probably a blessing, considering the problems with “blood avocados” abroad.)

I know, how UNFAIR. What a DISASTER. But there’s a solution, guys. Just don’t buy them at this time of year. They’re not even good! Why would you spend $12.50 and risk cutting into an oval of disappointment. As Auckland cafe chef Luke Adams admitted earlier this year, “I’d love to be able to take them off the menu when they’re $8 each and fibrous, stringy and pale. They taste like nothing, but people don’t care – if they want an avocado, they’ll eat it.”

Yes, wanking on about seasonal eating may seem tediously middle class, but it does make sense. It was, until very recently, the only option. It’s what our grandparents would have done (not saying we should do everything they did; avoid the drunk driving and casual racism, please). Produce tastes better when in season, it’s cheaper, and it’s better for the planet. There is no downside here.

Kelda Hains never has avocado on the menu at this time of year. The Wellington chef, who co-owns Rita on Aro Street and ran the kitchen at capital institution Nikau cafe for nearly 20 years, has been championing seasonal cooking since before it was fashionable.

Her last avocado delivery, from an organic supplier, was at least six weeks ago, she says, and they were the green-skinned Reed variety. “I know avocados are often available quite early in spring but they don’t often have a high fat content then, they’re kind of watery and disappointing,” she says. “So I think it’s October/November when they really start, then they go to March if you’re lucky.”

At Nikau, Hains certainly wouldn’t have had avocado on the menu in the chillier months. “I wouldn’t hesitate to take it off – it didn’t make sense. Partly because the quality goes down to the point where you don’t feel good about serving it; they’ve been in cool storage for a bit too long.”

Tomatoes were the same. “We used to only have tomatoes on from around Christmas until round about now. I know you can get them year round, but that was my personal rule, we would just say no, we don’t have tomatoes – the message got through eventually.”

And readers, you won’t starve. You’ll survive sans guacamole for a little while. There are plenty of things you can spread on your toast. Tried hummus? Feta? High-end nut butter? Non-high-end nut butter? Marmite? Vegemite? Cheese and relish? Butter? Butter’s pretty good. No, I don’t give a shit if these things aren’t keto-friendly. Oh wait, toast isn’t keto-friendly anyway. As you were, weirdos.

Seriously though, I get that you love avocado. I am a big fan myself. Hains understands too, noting that avocados are especially important for vegans and vegetarians. “It’s a super-easy, convenient way – especially if you’re not eating much animal fats – to get that delicious mouthfeel and kind of fattiness in your meal, and a lot of people see it as a really healthy, quick snack,” she says.

But the thing is, when you eat stuff only when it’s in season, you enjoy it more. It’s true, I swear. Think about gorging on feijoas, cherries and sweetcorn during their short seasons: glorious. Eat avo when it’s at its cheapest and best: spread it liberally on your toast, perhaps add a cheeky squeeze of lemon juice. Slice an in-season vine-ripened tomato, chuck it on top, sprinkle some sea salt over like salt bae, add a grind of pepper and there you have it, a perfect summer desk lunch.

“I’m more interested in foods that are seasonal because it just helps me stay a bit anchored,” says Hains. “It’s quite nice to see a short burst of a treat you see once a year, and then you move on to the next thing. There’s something really nice about anticipating and then having your first taste of the asparagus of the season, or whatever it is. So it’s a bit sad when those pleasures are getting less. There’s less pleasure in the world if you have everything all the time.”

And if you’re committed to a routine of smashed avo on toast every Sunday, why not branch out a bit. “Why do we expect a homogenous experience from cafes?” asks Hains. “Why can’t they be quirky and personal and a product of someone’s point of view? Then they’re more interesting places to be. They don’t all have to do avocado on toast, for Chrissake!”