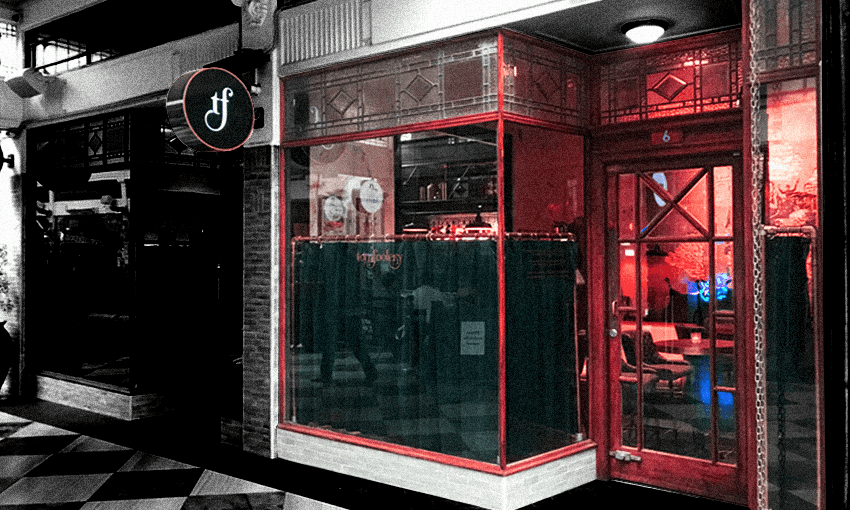 After his liquor licence application received dozens of objections, a domestic violence-accused former reality TV show contestant appeared to drop his plans for a K Road bar. So how did it manage to open?

The opening of a Karangahape Road bar connected to a controversial reality TV show contestant, despite mass objections from the local community last year, has opponents wondering what happened.

As reported by The Spinoff in March 2021, more than 40 objections were filed in response to an application for a liquor licence for a bar called Tomfoolery that was planned to open in St Kevin’s Arcade. The application had been made by Front.Left Ltd, the company of Chris Mansfield, who was fired as a contestant on the Three reality show Married at First Sight in 2019 after it was revealed he had outstanding domestic violence charges against him in the United States. Production sources subsequently told Stuff Mansfield had been “aggressive and volatile” during shooting, and edited him out of the show before it went to air. Mansfield previously worked as brand ambassador for DB Breweries and account manager for Hancocks, a liquor wholesaler.

Most of the objectors to Tomfoolery’s application were people who lived or worked around the close-knit St Kevin’s Arcade community and were concerned about Mansfield’s character, many of whom cited his domestic violence charges. The objections were not the only hurdle faced by Mansfield, with Auckland’s delta outbreak causing multiple delays to district licensing committee hearings. On December 23, some 10 months after applying, Mansfield withdrew his application for the licence.

By the start of this year, the bar’s social media and website had vanished and the Tomfoolery-branded brown paper that had covered the windows in the St Kevin’s Arcade space for more than a year were gone. It seemed the work of those who objected had paid off. “We were all celebrating,” says one of the objecters, Silke Hartung, who describes the arcade as her “living room away from my living room”.

So when Tomfoolery opened its doors last month, with Chris Mansfield still seemingly at the helm, many of the original objectors and members of the wider community were taken by surprise. How did the bar manage to get a liquor licence without any objections?

“Well, we didn’t know it was happening,” says Hartung. She says nothing in the new application signalled that it had anything to do with either Tomfoolery or Chris Mansfield.

So what happened? After the application for Tomfoolery was withdrawn in December, an application for a new on-licence on the premise was lodged by a different applicant, Donald Hospitality, and under a different operating name, Maggie May’s. According to the Companies Office, Rachel Donald is the director and sole shareholder of Donald Hospitality. On March 16 a public alcohol notice was published. The application received no objections, and the licence was issued on April 13.

“Mr Mansfield was not mentioned during the processing of this application,” a representative from the district licensing committee told The Spinoff. “Nor was there anything contained within the application to indicate that Mr Mansfield was involved as a director or shareholder of the company or that he would have any involvement in the day-to-day onsite running of the bar. Other individuals were nominated in the application as having those roles. If that situation were to change, the council would take the matter up with the licensee.”

There is plenty to suggest that Chris Mansfield is still very much at least tied to the bar. Stuff reported last month that he’s working as a “consultant” there. Each time I’ve walked past, Mansfield has been inside the bar, its email is “chris@tomfoolery.co.nz”, and two Google reviews mention “Chris”. And despite the new application being made under the operating name Maggie May’s, the bar is still called Tomfoolery.

Another objector to the original application, Isobel*, says the way this has played out “seems super duplicitous”, adding that she’s concerned it “was so easy for him to circumvent the process”. She has concerns this could further put people off getting involved in the civic process in future.

Communities Against Alcohol Harm secretary and lawyer Grant Hewison says the problem is “the law doesn’t really provide for situations where the applicant hasn’t disclosed things that they should have disclosed, like the ongoing involvement of Chris Mansfield, and that they’re just going to keep trading as Tomfoolery”. This meant there was no way for objectors to know that it was essentially the same establishment going ahead, and even if they did have suspicions there was little grounds they could have objected on, he explains.

Beyond that, “there actually are some other issues that were raised in the original objections which just haven’t been dealt with, like the toilets”, he says. “Very disappointing is an understatement.”

The way in which Tomfoolery obtained its licence creates a worrying precedent for future licence applications, Hewison says. “It’s very unsuitable for someone to basically create this entity and create a new name, get an application through and then go, ‘hey, look, we fooled you all, we’re actually still Tomfoolery and Chris is still involved’.”

While Hewison says it’s a long shot, there is a provision under the relevant act that allows for a rehearing. A group of the objectors have applied to the district licensing committee for a rehearing on the basis that information wasn’t properly provided in the application form.

The process raises another systemic issue with the liquor licensing process. Of the 40-plus people who objected, most were struck out – including women who had accused Mansfield of abuse and domestic violence.

“One of the difficulties with this act is that it has this requirement that you must demonstrate, when you’re an objector, that you have an interest greater than the public generally,” Hewison says. Usually this is decided by a geographic proximity test where if you live within one to two kilometres of the premises, you have the right to make an objection. “It’s the easiest pathway for people to get status or standing,” he says.

But Hewison believes those who raised objections around character who had prior experience with Mansfield arguably have an interest greater than the public, “because that connection with the applicant was important in providing evidence about his character”.

Since the beginning of this saga, opposition to Tomfoolery has been fed both by Mansfield’s lack of engagement with the community and his perceived lack of remorse for his past behaviour, Silke says. The way their license was obtained has only compounded this.

It’s also reflective of how protective locals are of the arcade and the surrounding area – a feeling heightened by locals’ sense of powerlessness about the ongoing gentrification in the neighbourhood.

“Nobody has anything against people partying,” says Hartung. “People just don’t like people with strange morals running a bar in a good place.”

Neither Chris Mansfield nor Donald Hospitality owner Rachel Donald have responded to requests for comment.

*Name has been changed.