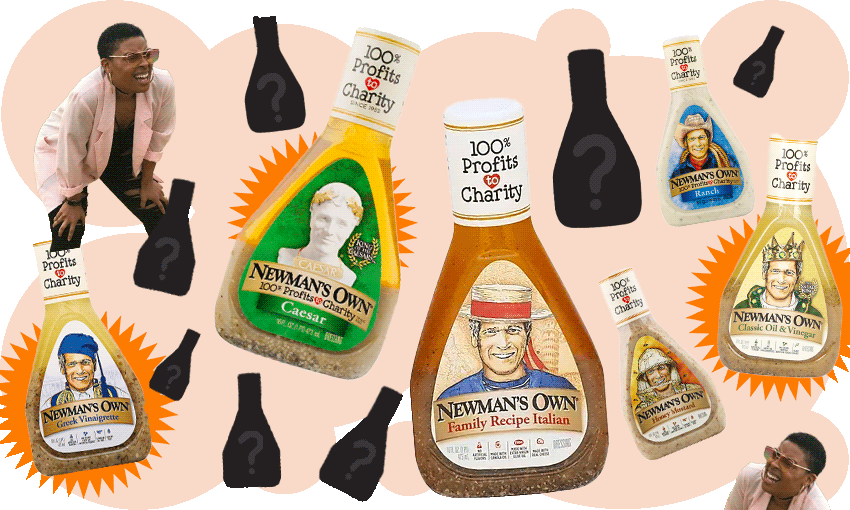 Newman’s Own salad dressing was a ubiquitous presence in the family fridge when I was growing up. I remember being enchanted by the actor’s ever-evolving costumes on the front of the bottles, but beyond that I never really gave the supermarket staple a second thought. Until now.

About two months ago, completely out of nowhere, I started craving a big bowl of crunchy lettuce with Newman’s Own Caesar vinaigrette. On my weekly visits to the supermarket I’d meander the aisles, clutching my shopping list with “Newman’s Caesar” scribbled on it, ready to chuck a bottle in my trolley when I reached the dressing aisle. And every time I left empty handed. After weeks of searching several supermarkets for any sign of Mr. Newman’s friendly face, I started to grow suspicious. The salad dressing section used to be packed with different flavours. Where in the world had all the Newman’s Own gone?

I began my search by emailing enquiries to our two major supermarket chains, Foodstuffs and Countdown. The first response came back quickly and sent a chill down my spine: “We’ve checked with the team,” said a spokesperson from Foodstuffs, “and Newman’s Own salad dressing has been discontinued by the supplier.” “Discontinued” is not a word you want to hear associated with a food you’re craving.

Newman’s Own has been around since 1980, when the movie star and his mate A. H. Hochner made a massive batch of homemade salad dressing and decanted it into wine bottles to give away to friends. Their friends were so impressed that they convinced the pair to start selling it commercially in 1982. Feeling slightly guilty about all the money they’d made, Newman decided to give 100% of the profits to charity, something that’s become an iconic part of the branding. To date, Newman’s Own has donated more than US$540m to charity organisations around the world – including some in Aotearoa. Discontinued? Surely not.

A more hopeful-sounding response arrived in my inbox the following day: “Shipping issues mean we’re not able to purchase Newman’s Own dressings to sell in our stores at the moment,” said a spokesperson from Countdown. “We know Newman’s Own are a favourite and customers can rest assured that we are working closely with our supplier to try and get them back on shelf as soon as we can!”

It didn’t look like I was going to get my hands on a bottle of the stuff any time soon, so I went back to where this obsession all began: my parents’ fridge. My mum is the queen of condiments – her kitchen boasts an abundance of relishes and chow-chows, there’s always a bewildering array of hot sauces in the pantry and salad dressings aplenty in the fridge. As I suspected, she had a bottle of Newman’s Own Caesar vinaigrette tucked away in the fridge door. Just over half-full – or just under half-empty depending on your outlook. Best before May 23, 2021.

Mum told me she first encountered Newman’s Own in the early 90s when my godmother, then a flight attendant, used to bring back bottles as souvenirs from the US. “The bottles in America are bigger than they are here,” she said, “and there are way more flavours.” Why did she start buying it once it became available in New Zealand supermarkets? “I liked it,” she replied, looking disinterested in the direction our video call was taking. How did she feel knowing the dressing is no longer available in New Zealand? “I’ve got another dressing I like now,” she shrugged unsentimentally. Her tastes have changed over the last two decades, she explained. These days she prefers lighter, more natural and locally made vinaigrettes – “especially ones with raspberry in them.”

According to the Countdown spokesperson, their supermarkets haven’t had stock of Newman’s Own dressing for “around six months now”. This story was corroborated by a spokesperson from Hutchinsons, the grocery importer that manages the brand in New Zealand. “Unfortunately over the last couple of years, since the start of the [Covid-19] pandemic we experienced ongoing supply issues and increased costs, which left us no option but to temporarily delete the range from stores late last year,” they said in an email. “Very disappointing!”

There is hope for Newman’s Own lovers on the horizon, however. “We have been working for some time to reintroduce the range with products made in Australia,” the Hutchinson’s spokesperson said. “We are hoping, all going well, to have the Paul Newman’s range of salad dressings available to New Zealand consumers in time for summer.”

For now my salads remain undressed, and my fingers firmly crossed that we may all be able to enjoy a lovely Newman’s Own-dressed salad again come barbecue season.