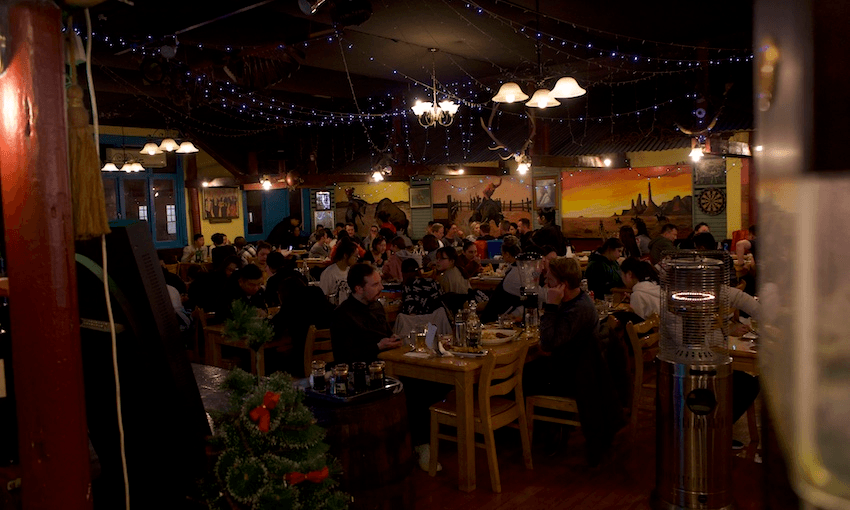 Why I love: Gogo Music Cafe

Introducing our new series “Why I love”, where friends of The Spinoff share their favourite eating and drinking establishments. First up, Business is Boring host Simon Pound introduces one of his happy places, Gogo Music Cafe in Balmoral, Auckland.

I don’t like to exaggerate, but I have been known to say that Gogo Music Cafe is the best place in the world.

Let’s say it’s 9.30pm on a Thursday in Auckland and the work event you went to had no food and everyone is three drinks in and starving. No one knows where to go. Here’s the best kind of secret to let people in on: you must go to Gogo Music Cafe in Balmoral.

It used to be a western-themed bar called the Cask and Cleaver. I remember looking out the window from the old Al and Pete’s across the road that I used to work at mumble mum20ble years ago. We’d see people lining up outside kitted out as cowboys and girls for singles night. The decor you’d expect from then is still pretty much intact. A bunch of cool Chinese people took it over and changed unusually little. There’s all manner of American western kitsch, a lot of it getting more casually racist by the year: Native American pictures, headdresses, and also an incongruous Resene paints promo picture from the deepest 1990s.

Although it’s called Gogo Music Cafe, and it has a stage thing, and feels like karaoke might-kind-of-should-be a go, I’ve never known it to have any music to speak of past piped-in background pop. That said, in this magical house of wonders I wouldn’t be surprised if one day there was actual live music – do let me know.

To get there you go up some stairs close to Spicy House. It’s a big open room with bench-seat-type tables, that inexplicable-if-you-don’t-know-the-backstory western theme, and a lot of lights it looks like someone got carried away buying on AliExpress. In the corner is a charcoal grill enclosed in perspex, that looks like the kind of work – or final resting place – you’d wish on your enemies. In summer it looks so hot that I wouldn’t wish it on anyone, save maybe the ICE agents separating families at the US border, but I’m thankful someone is in there, as from that little box they serve up the most amazing array of things on sticks.

The grizzly and grisly fear-factor animal parts are a given, heart this and tongue that, but the real stars for me are the veges. They have corn, garlic, mushroom, potato, and do a skewer of cauliflower in a brothy sauce that is so nice I don’t want anyone to find out if it is actually vegetarian or not.

Here’s what you need to order when you go: get the Xinjiang chicken. Go for the small, unless there are more than five of you. Get them to put a double serving of the handmade noodles in. Pick away at it and get every last gravy-drowned potato piece, every sliver of garlic, chilli and capsicum.

Get the cucumber salad, shredded potato salad, and needle mushroom chilli salad. You must order the deep-fried flounder. It’s the best bang-for-buck yum thing I know of. For skewers, be sure to get the mushroom, garlic and cauliflower ones; and the lamb, chicken skin and heart if you fancy.

The food is great, really great, but the general vibe is why it’s so fun to bring new people into the Gogo fold, and also why even though I know they have another outpost on the Shore, I haven’t been. Why spoil the magic?

The Balmoral place is just teeming with the coolest people you’ve seen. On a Friday night there is a queue down the stairs and crowds of people with the freshest international styles – Gucci bomber jackets and Kenzo tiger jumpers, paired with Adidas slides and grey trackpants. A lot of puffer jackets that look cheap and definitely were not. The coolest kids in town. It serves late – so that even if all the good places you know have closed their kitchens by 9.30pm, Gogo will be there for you.

I love it. Their lamb skewers kept me eating red meat longer than I meant to and I still miss them, all cumin sticky and spicy and delicious. And I think their Xinjiang chicken is why I’m still eating chicken.

Go there with a crew. Order the Orion beer three-litre draft tower. Say “xie xie” and be answered with “no problem mate”. Get amongst. Some might even say it is the best place in the world.