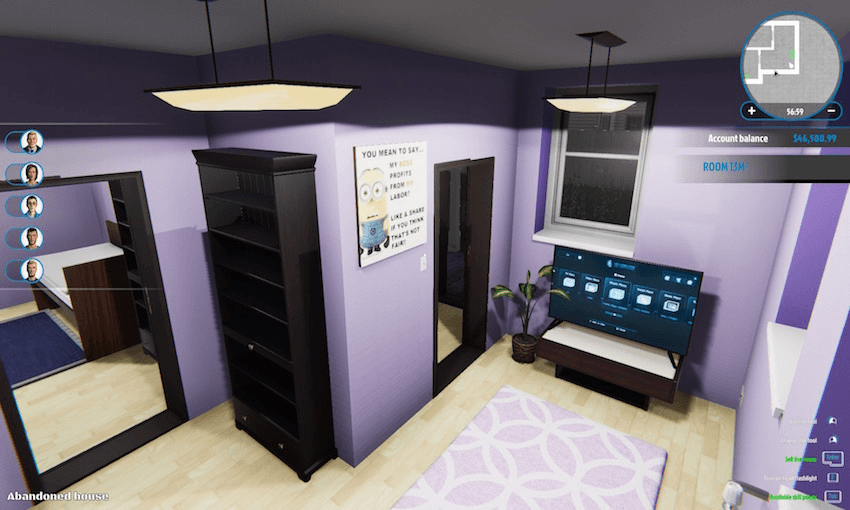 House Flipper is the renovation simulator for the eternally renting millennial

Born after 1980? Going to be renting your entire life with no end in sight? House Flipper is the game to simulate a renovation future you’ll never see. Adam Goodall reviews.

When I was a kid and my parents made me go to Mitre 10 Palmerston North with them, I would go straight to the part of the store where they kept the house paint. In that part of the store, Resene (or Dulux, or maybe Cabot) had set up a computer kiosk. Members of the public could only use one programme on the kiosk. In it, you were asked to pick a pre-furnished room in a house that looked like it had been built for a four-page spread in Better Homes and Gardens. You were then given a palette, the full range of Resene (or Dulux or Cabot) house paints. Tap a colour, tap a wall or ceiling or floor, watch it change from a reserved white to a powerful purple.

I’d play on that kiosk until my parents found the hose or lawnmower or whatever that they were after. I loved it.

The first house I sold in House Flipper was a one-bedroom rescue. The victim of an electrical fire, it needed some serious remedial work: the walls were crumbling, the carpets were grey with ash and the doors were rotting in the frames. I went to work. I painted the walls sharp green, stripped out the bad carpet and replaced it with complementary beige, retiled the bathroom, mounted new weatherboards on the walls outside, installed a new shower and a new toilet and a new wall-mounted television. I put a poster of The Rock’s 2006 Xbox and PS2 game Spyhunter: Nowhere to Run on the bedroom wall because I like to leave a piece of myself in every house I renovate.

I spent two hours and $5,000 renovating it. I watched the sun fall and rise on the house as I worked. I sold it at auction to an artsy woman named Veronica for a $20,000 profit. She was disappointed there were no flowers in the house, but not that disappointed.

House Flipper is a renovation simulator that’s been near the top of Steam’s global bestseller charts for two weeks running. You play a young entrepreneur looking to make a fast buck on the housing market, buying houses, doing them up, selling them on to a loose cast of archetypes for a tidy profit. In between you pick up odd jobs for extra cash, cleaning out garages and renovating homes so people can move their grandmas out. This is the formula that did it.

It makes sense, though. House Flipper gives you the freedom to design a house you’d want to live in. It lets you paint it the way you want. It lets you knock down interior walls and put up new ones. It lets you put up pictures without worrying about what the blu-tack or nails might mean for your bond. It lets you take photos of your house then sell it on, getting your foot on a property ladder that you can never fall off.

House Flipper is all about that fantasy of doing easy work and earning easy money. You can buy a house for $40k, renovate it for $5k and flip it for $60k without negatively impacting the housing market. There are no quick time events you can fail, no unreasonable demands from your buyers, nothing more complicated than clicking and holding the left mouse button. You have a level of control over these houses that is almost impossible to imagine in real life if you’re a millennial born into an international housing crisis with no signs of slowing. The apartment I live in will always have boring cream and grey walls, but I can paint this three-room townhouse ‘Amaranth Adventure’ and no landlord’s gonna be able to stop me.

This freedom is limited, though. House Flipper asks you to perform the role of renovator through rote patterns of highlighting, clicking and holding, and these patterns get gruelling as the houses you buy get bigger and bigger. Tiling a bathroom: buy a pile of tiles and put them on the floor, click on the pile, highlight a section of the wall, click and hold, repeat until you’ve run out of tiles in the tile pile, buy another tile pile and start again. Installing a toilet: click on a glowing screw or piece of plastic and hold until the animation has completed. Installing a shower: like installing a toilet, but it takes five times as long.

Typically in these types of simulator, the limits to how you play aren’t designed to be purposefully stressful: they’re designed to be calming, even meditative. Here, though, they’re constricting. Like that kiosk in Mitre 10, the design expressions available to you are ultimately shallow. Wall tiles come in a handful of colours, but none of those colours matched the bright, summery aesthetic I wanted for the first house I renovated. I painted that bathroom white. There’s only one kind of shower, only one kind of washing machine, only one kind of mirror. You don’t have that kind of control.

There’s very little scope for discovery or surprise, and House Flipper doesn’t even seem all that interested in playing against that, in embracing the meditative state of performing labour digitally. You can upgrade your renovator, but the upgrades are almost exclusively for speeding up your labour – paint faster, tile faster, do less to finish your odd jobs. If the game knows that its animations are tedious, slow and pointless, what’s their worth in the first place?

I always complete the odd jobs. When I finish, I hang a picture in the person’s house, taken from the pictures I’ve downloaded over the years. A libertarian bro got a Minion meme about communism in his lounge. A couple with a three year old came home to a picture of Detective Pikachu complaining about cramps. A scuzzy party dude bought a house full of Michael Bublé pictures. It’s my way of asserting control over these places, of saying that I designed this the way I wanted to. That’s what keeps me coming back to House Flipper, even with all the frustrations. I liked its utopian promise that I could do what I wanted to a place, that I could design it the way I wanted and that I would be rewarded for doing so. Whether you’re a kid or a twenty-something renter for life, that promise is nice for a little while, even if it’s fake.

You can buy House Flipper on Steam.