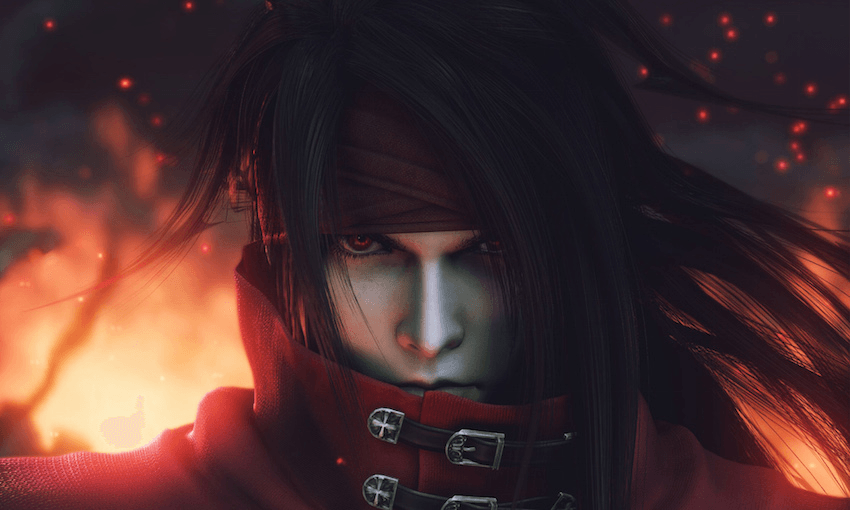 Vincent Valentine, The Man With Belts On His Face.

Was Dirge of Cerberus an emo-drenched misfire or dark masterpiece?

Vincent Valentine, The Man With Belts On His Face.

Is the much maligned Final Fantasy VII sequel/spinoff Dirge of Cerberus really as bad as everyone says?

I was 17 when Dirge of Cerberus: Final Fantasy VII came out. As a longtime Final Fantasy nerd at the height of my obligatory emo phase, the idea of a new game focused on Vincent Valentine, everyone’s favourite moody pseudo-vampire hero, was extremely my shit. I bought it the moment it came out, played through it in a matter of days, and loved every second.

In the 12-odd years since, I like to think I’ve grown up somewhat. I’m an adult-sized human with a spouse and a mortgage and a day job. I resonate more with lovable goofballs like Jake Peralta and Atsuko Kagari than brooding anime goths. I better understand my depression as exactly that – a mental illness – and I’m getting help and support for it, instead of being “so misunderstood, man” without ever knowing why.

In that decade and change, I’ve also learnt that Dirge of Cerberus maybe isn’t as beloved as 17-year-old me would have assumed. This game is something of a black sheep among the handful of Final Fantasy VII spinoffs collectively known as the Compilation of Final Fantasy VII. It has an aggregated Metacritic score of just 57, compared with 83 for the Crisis Core: Final Fantasy VII and 88 for the direct-to-DVD movie Final Fantasy VII: Advent Children. It was widely criticised for hybrid RPG/shooter gameplay that was deemed repetitive and uninteresting, and its story – often the main attraction in an RPG – met with a mixed reaction. Opinions from the general, non-critic populous were more forgiving, but only marginally so.

Why the disconnect between my own experience with Dirge of Cerberus and that of so many others? Was it just the luck of a game coming out at exactly the right time, when I was perfectly primed to hear its message and overlook flaws that others found glaring? Was I just a dumb teenager who didn’t know any better? In an effort to find out, I pulled my old PS2 out of storage, blew the dust off my old Dirge of Cerberus disc, and got down to gun-toting, scarf-wearing, demon-shapeshifting business.

At the risk of undermining everything I said previously about being adult-sized, I still love this game. Hell, with the benefit of hindsight, a decade’s worth of progress in the video game medium to put it into context, and a better understanding of why it’s so disliked, I think I love Vincent Valentine’s Excellent Adventure™ more now than when I first played it. If there was ever a game that deserved another shot – perhaps through the magic of a PC port or one of those PS2-on-PS4 classics – it’s Dirge of Cerberus.

There was a lot happening in the video game space in the mid-2000s. By its third release in 2005, the Devil May Cry series had well established the “stylish action game” genre, with its focus on big, acrobatic and sarcastic anti-heroes. That same year, Resident Evil 4 revolutionised third-person shooters with its over-the-shoulder camera, paving the way for Gears of War, Uncharted, and countless other games in that now-crowded genre. Console manufacturers were experimenting with online play, while Square Enix was experimenting with the money-printing possibilities of direct sequels after the unexpected success of Final Fantasy X-2.

In the middle of all that, Dirge of Cerberus was born. The popularity of angsty anti-heroes found a natural ally in Final Fantasy VII‘s brooding side-character, brought to life through Tetsuya Nomura – a character designer famed for his eccentric designs and obsession with belts and zippers – at his least restrained. Meanwhile, producer Yoshinori Kitase had wanted to make a shooter for some time, but Square Enix’s development staff were far more familiar with role-playing games. The result was a JRPG/third-person shooter hybrid that used a generous aim assist and RPG mechanics to appeal to people more used to turn-based combat than action games.

The criticism around Dirge of Cereberus was focused: it was “too easy” and “too bland”, in a time when being “challenging” was seen as a de facto good thing. Revisiting the game today, I think its hybrid nature is more effective than most people would give it credit for. A generous aim assist means you only need to aim in an enemy’s general direction to be able to hit them, while RPG dice-rolls take care of things like damage. With less focus on accurate shooting, you’re not confined to hiding behind cover and taking pot shots like you do in almost every third-person shooter that followed; you’re free to jump and dance about, using the scenery and Vincent’s acrobatics to your advantage. (If you prefer, you can disable aim assist entirely and play it like a “real” shooter, though I’d say that’s a far less enjoyable way to approach things.)

I’ll admit that Dirge of Cerberus is somewhat clunky in the execution of all this, mostly due to a lack of enemy variety and poor AI. Vincent’s movements aren’t as fluid as they could be, and magic could have played a bigger role than three fairly pedestrian spells. But it’s still a creative, experimental game, and you can see the fruits of that inventiveness in everything from Final Fantasy XIII to to Sega’s Vanquish – even if the latter isn’t explicitly inspired by Dirge of Cerberus, it’s the zenith of the acrobatic shooter concept that Dirge toyed around with.

Vincent Valentine’s story is another beast entirely. When you strip back all the convoluted science-fantasy nonsense and buzzwords like “Protomateria” and “Chaos Gene”, it’s essentially a story about human experimentation and unrequited love. In that, it manages to be both serious to a fault and so (unintentionally) camp that it’s impossible to take seriously. I love that.

When I first played it as a teenager of very questionable taste, Dirge of Cerberus struck me as a Very Thought-Provoking Story Indeed. In the years since, video games have arguably gotten much better at telling nuanced, intimate, personal, heartfelt stories. That’s a wonderful thing that I wouldn’t change, but there’s something charming and delightful about the eccentric melodrama and Vincent’s emo superhero antics that today’s more “mature” games just can’t match. It’s not every day you get to play a game about a guy who can jump multiple storeys, transform into a demon, and shoot down helicopters with a single pistol shot, and then turn around and brood at length about the love of his life falling for someone else.

Dirge of Cerberus is undeniably flawed, from the way it undermines Final Fantasy VII‘s ambiguous ending to its over-reliance on buzzwords and convoluted plot developments. Hell, Vincent himself could probably do with seeking professional help and finding a way to move on from his self-pity and man-pain. But it’s so over-the-top in all of this – in stark contrast to today’s crop of ultra-serious sad dad games – that playing it in 2018 as an adult-sized human, it’s oddly engrossing in all its nonsense.

More than anything, Dirge of Cerberus is a snapshot of what video games – and pop culture more broadly– looked like in 2016: a weird mix of emo sensibilities, eccentric characters, burgeoning new directions in game design, and melodramatic storytelling that was seen as Oh So Serious at the time. Even with its flaws, it remains an enjoyable game to play, it’s aged surprisingly well, and its historical relevance is worth preserving.

Square Enix, it’s time to give the misunderstood, angst-ridden black sheep of the Final Fantasy VII family another shot at life.