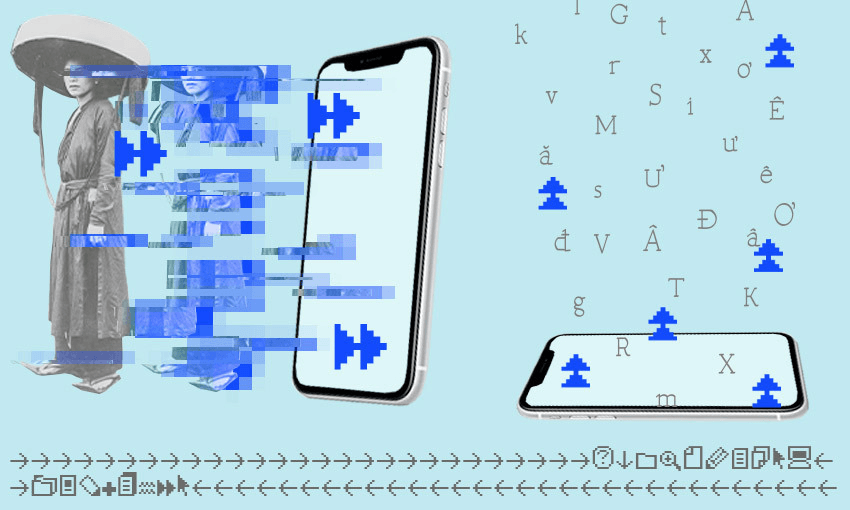 When you can’t learn a language from your ancestors, learn from an app

Many people in Aotearoa long to learn the languages that their families could speak in the past. For IRL, Shanti Mathias explores the potential of online learning for those who want to reconnect.

In March 2020, the month the pandemic started, Dani Pickering discovered something amazing: their ancestor had written journals about being forced out of the remote Hebrides Islands by British colonisers and starting a new life in 19th century New Zealand. Better yet, the journals still existed five generations later. One was in the Auckland War Memorial Museum. After a long journey discovering their ancestry, Pickering, a PhD student in Te Whanganui-ā-Tāra, was delighted to learn that they could access a piece of their past.

There was just one problem: the journals were mostly written in Scottish Gaelic, a language that nobody in Pickering’s family had spoken over those five generations. But there was a way to learn, because the Scottish Gaelic course had just launched on Duolingo.

“I took that as a sign from the universe to learn my ancestral language,” Pickering says. Two years later, Pickering’s phone screen is filled with colourful cartoon badges signifying language learning achievements, and they have almost finished the Scottish Gaelic course.

US-based corporation Duolingo is by far the most well-known and popular language learning website and app; the company claims to have more than 40 million users, and was worth more than $6.5 billion dollars at its IPO last year. It is one of many sites, with names like Mango Languages, iTalki and Babbel, that promise the opportunity to learn a new language on your phone.

“I feel really gutted about it,” says Gina Dao-McLay, a student based in Wellington, of their inability to speak fluent Vietnamese. While Dao-McLay was able to speak Vietnamese as a young child, later exposure to English at school meant that they lost their language. When, as an adult, Dao-McLay wanted to practise Vietnamese in preparation for a trip to see family, Duolingo seemed like a good option.

“I can’t really connect with people … without knowing the language,” Dao-McLay says. In their desire to learn, they aren’t alone: according to Duolingo’s 2021 Language Report, more than 70% of people who have started learning a language in the past two years say they are motivated by family heritage, ancestry or culture.

“[Without language] you feel cut off from a big part of your culture,” says Alex de Vries, a masters student based in Auckland. He was delighted that Barakat, a film in Kaaps, the language from where his family lives in South Africa, was released last year, “but it was very confronting to have to read the subtitles for the whole film – like you’re a part of it, but you’re not.”

I know how de Vries, Dao-McLay and Pickering feel, because I, too, have longed for language. My father’s parents spoke to him only in English when they moved to New Zealand from India in the 1970s, so he never became fluent in Konkani, the language of our South Indian ancestors. Instead, I grew up learning Hindi, a language I know from classrooms and bazaars, but my halting fluency is not enough to make me comfortable speaking it with friends or at home. Missing India, at 19 I downloaded Duolingo and started tapping through the Hindi course, but filling in the blanks and parroting simple sentences couldn’t give me what I wanted: to not flounder when I try to describe a thunderstorm; to reach for words in Hindi and find them waiting; to be certain I belong.

Being able to learn a language without talking to a real person who speaks it is a relatively new phenomenon. If Pickering’s ancestors hadn’t been driven out of their homeland; if de Vries’ family had never left South Africa; if Dao-McLay had been able to attend a school where they weren’t the only Vietnamese person; if colonisation hadn’t violently eradicated people’s abilities to speak their own languages, all over the world, things might have turned out differently for many of us. We might still be speaking te reo Māori or Vietnamese or Kaaps or Gaelic with our families, not learning from a machine. But while there’s no way to change the past, it is possible, even easy, to download an app.

Duolingo, which claims it is the most effective way to learn a language online (as do many of its competitors), uses particular strategies to get users hooked. The colourful achievement markers Pickering has gathered is one such motivator. The app also sends insistent reminders to users who aren’t opening it frequently enough, and offers various advantages (as well as the removal of ads) to those who pay.

After I re-downloaded Duolingo as I worked on this story, the passive-aggressive owl notification popped up each day, cajoling me to practise. The prod to maintain a streak successfully convinced me to open the app. But behind the bright icons was a reminder that algorithm-generated sentences about Raja going to Delhi for five months couldn’t fulfil my desire for a different kind of fluency.

Duolingo is an example gamification, where features of a game are folded into activities that are not normally game-like. It can be motivating, but it also flattens the nuances and beauty of a language into just more content to consume. While Pickering notes that Duolingo “isn’t my daily Candy Crush,” they do feel conflicted: proud of their 700-day learning streak while also aware that the reasons they’re learning Gaelic are far deeper than the desire to maintain a position in the Diamond League.

While the digital world seems limitless, those who seek to learn online are often reckoning with a lack of materials for all but the biggest languages. “There are no resources to learn Kaaps,” de Vries says, although he’s done his best to find what is available. It’s important to him to learn Kaaps, specifically, as a Black language, a dialect of Afrikaans drawing on Javanese, Khoekhoe, and Dutch – a history of empire and resilience held in vocabulary.

Another issue: the vocabulary and pronunciation taught by apps teach is decided by the creators of the course, erasing regional differences. While Dao-McLay’s family is from northern Vietnam, they found that Duolingo taught the southern dialect of the language. “With some of the words, it was like – that isn’t how my family pronounces it, that isn’t what I want to learn,” they say.

Lack of resources means that smaller languages don’t have additional features on the app, like the ability to speak into the phone to practise pronunciation. “I found Duolingo limited for speech but there were other apps in the ecology of online language learning that fill that role,” Pickering says.

While all humans are uniquely hardwired to learn language, that doesn’t mean it’s easy. Pickering walks me through their Duolingo routine: a half hour of practice a day; adding each new vocabulary word to a set of flashcards; joining a Zoom group of other Gaelic learners; listening to a Gaelic-learning podcast on the weekends while doing the ironing. How long does this all take, I ask. They add it up on their calculator: at least four and a half hours a week. For them, Duolingo works because they treat it like a course, not a game.

In Aotearoa, where the demand for te reo Māori teachers is at record levels, could online learning plug the gap? A much–anticipated te reo Māori course has been in the Duolingo Incubator for a number of years, although the release of the beta version has been pushed back several times. A Duolingo spokesperson told The Spinoff there is still no release date confirmed for the course. One reason for the delay has been a lack of resources, as the course was originally developed by volunteers (the company’s volunteer contributor programme has since been closed, and all contributors are now paid).

Pickering has thought about what it means to learn a language from a company that commodifies their ancestral language by making them watch ads or pay a subscription to keep learning. “Duolingo’s interests are not our interests. It’s a corporation. This is capitalism.”

But while important, those concerns fade against the sense of connection they’ve gained from learning Scottish Gaelic. Since starting the Duolingo course, they’ve visited the grave of their ancestor – the one who wrote the journals – in Waikumete Cemetery four times. Each visit is a reminder of why they have chosen to learn the language that their family lost. “I speak to him in Gaelic … each time, I can put together more complex and articulate sentences,” Pickering says. “It’s given me a place to stand.”