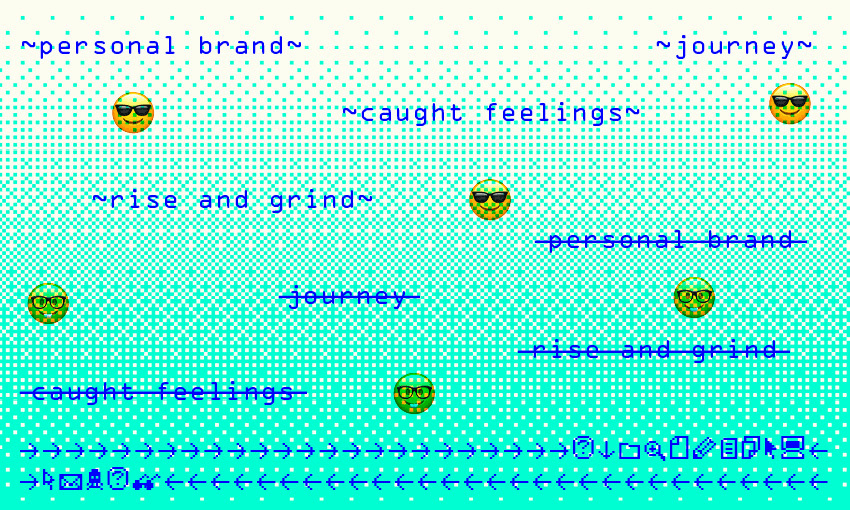 Communications platforms are auto-formatting bracketing tildes into strikethrough text. No one wants them to. As part of an IRL miniseries on how the internet shapes our use of language, Madeleine Holden explores this injustice.

If you want to use terms like “love language,” “journey” or “rise and grind” on the internet, but need to simultaneously signal you’re above the use of such corny and clichéd lingo, you’ll probably chuck a tilde (~) on each side.

“This will do wonders for my personal brand” and “this will do wonders for my ~personal brand~” are two very different statements, for example: the former is a painfully sincere dispatch from someone who’d unselfconsciously identify as an entrepreneur or girlboss. The latter is semi-ironic, playful, mocking and self-deprecating all at the same time; a half-joke by someone who wants to use hustle culture slang, therapeutic jargon, or a term that’s very girly or New Age, but needs you to know she knows that’s cringe.

Maybe none of this makes sense to you. It probably reflects well on you if it doesn’t. But this is how certain hyper-online types use language now – in fact, it’s how they’ve been using it for the best part of a decade.

Since at least the mid 2010s, bracketing tildes have indicated “a tone that is somewhere between sarcasm and a sort of mild and self-deprecatory embarrassment over the usage of a word or phrase,” according to a surgical account of the trend by Buzzfeed reporter Joseph Bernstein. Tildes “let the enclosed words perform both sincerity and irony without a cynical effect”; they “anticipate your negative reaction to their contents, and, in response, seem to wiggle away.”

Writers for digital publications, the chronically online, social media managers, under 35s: all these groups intuitively grasp and regularly use the semi-ironic tilde. Boomers and offline normies usually don’t. But another cohort who seemingly has no clue how the tilde is actually used in the wild is perhaps more surprising: the very people who design our online communications platforms, like Whatsapp, Slack and Google Chat.

If you bracket your embarrassing cliché with tildes on any of these platforms, something grotesque happens: the text will be automatically rendered in strikethrough formatting. ~Now more than ever~ becomes . ~Microinfluencer~ becomes . Your playful, self-aware use of language becomes unintelligible; the tildes themselves erased. Horror of horrors, you might look like you used a term like “wanderlust”, “mindful” or “unrequited love” sincerely.

All of this begs a few questions. Does anyone at Whatsapp, Slack and Google know about this tongue-in-cheek tilde usage? And who is the strikethrough shortcut even for? Presumably these companies had in mind some mystery demographic that (a) never intends to use tildes ironically and (b) needs strikethrough formatting so often they require a special keyboard shortcut. But is there actually a single living soul who wanted this “fix”?

I put these pressing questions to the PR teams at all of these companies. I heard nothing back from Whatsapp; a rep from Slack said, dubiously, “we believe the current experience best matches the behaviour most users will want and expect when using these characters”. A Google spokesperson seemed to misunderstand what I was asking her, reiterating to me that “Chat users can format their messages … by using special character formatting.” When I asked again whether anyone at Google knew about semi-ironic tildes and if there was any actual user demand for the strikethrough shortcut, I was told the PR team had “nothing further to share at this time”.

Perhaps this is the end of the road for the semi-ironic tilde. The frustration of the strikethrough auto-format might be too much for users to bear, and it seems like hyper-online types are already moving on to the sparkle emoji for a similar effect anyway. The way we use language evolves at breakneck speed on the internet, meaning today’s little tics and techniques – “lmaooooo” and “uwu” and SaRcAsTiC CaPiTaLiSaTiOn and “/rant” – are tomorrow’s dated relics (RIP “teh” and “omg!!!!!eleventeen!!!”). It’s probably too much to ask that tech platforms keep up with all of them, especially given they never last.

But for those who aren’t ready to give up on the cheeky tilde, there’s some good news. While Whatsapp plainly notes there’s “no option to disable this [autoformatting] feature,” meaning your group chats with overseas family and friends are probably doomed to remain littered with accidental strikethroughs, on Google Chat, the new “Format” button “will override any special character formatting added to the message,” the PR rep told me, meaning bracketing tildes will stay put.

On Slack, you can press Ctrl/Cmd+Z to undo the autoformatting, or a simple space on each side of the tilde will also do the trick. Finally, you can stick to platforms like Twitter and iMessage, where the autoformat abomination doesn’t exist, and where the user demographics are, let’s face it, naturally more attuned to internet language. Good luck, and ~stay blessed~.