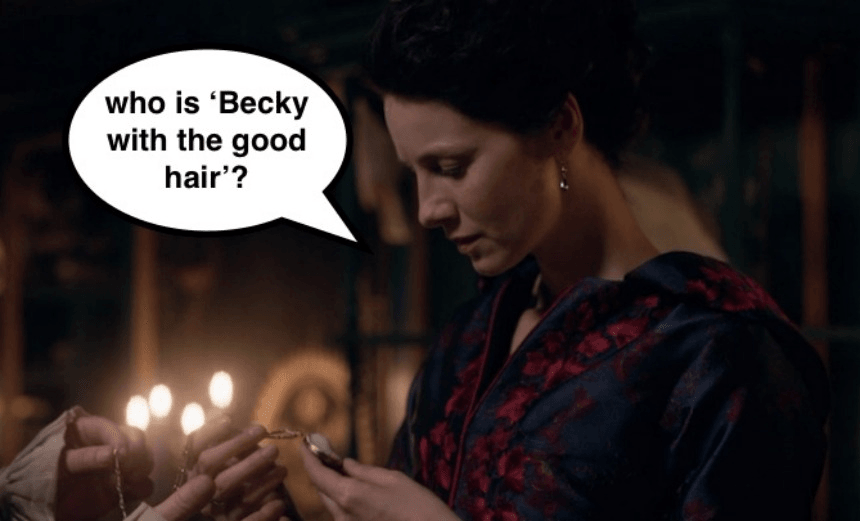 This week’s Outlander episode covered more ground than Rupert and Angus when Mrs Fitz hits the dinner gong. There was a poisoning, greasy convict juices, bedroom intruders, perfect Jamie hair, a monkey bite, a joke about a dwarf, and more waxy candles than you could shake a naked flame at. Plus, hands up if you have a pair of hands, because you’ll love this episode. There are hands everywhere!

So much drama, so many thoughts. Let’s get to straight to it.

1) Never trust a man who plays Yahtzee with sheep knuckles

“I cannot see his fate,” Raymond says of Frank. That’s because Frank doesn’t exist yet, but also because chucking some old bones leftover from Sunday’s roast dinner onto a 100% synthetic zebra skin does not make you a magician.

Raymond’s spooky waistcoat embroidery may successfully distract Claire from the truth, but I’m on to his charlatan ways. Plus, everyone knows you need a magic ball to see into the future. Amateur.

So is Chlamydia, Croquembouche, or even Lard Bucket, for crying out loud. Claire, for the sake of your child, do not give naming rights to Jamie.

4) If it sounds too good to be true, then it probably is

Raymond assures Claire there’ll be no charge for the magic necklace that will keep her safe from poison, tell her the weekly lotto numbers, and remind her of Jamie’s next dental appointment. It’s practically an iPhone 5.

Never trust a winking man who gives you free stuff. Before long there’ll be endless phone calls pressuring you to pay the necklace off in 12 easy payments of $129.95 so READ THE SMALL PRINT CLAIRE THAT’S ALL I’M SAYING.

6) Claire’s status as a ‘liar, liar, pants on fire’ was predestined from birth

Blow me down and fill my croissant with chocolate, if you rearrange the letters of Claire’s name you get ‘liar’. OK, you actually get ‘liarce’, but say it with a French accent and it sounds like you’re totally fluent. “Jamie and Claire are both liarce,” you’ll cry, astonishing your friends with your sudden bilingual powers.

Claire is also an anagram of ‘éclair’, which is excellent news because the French make bloody good pastries. Lord knows Louise – preggers with the fruit of Charles Stuart’s loins – should prepare for hardcore comfort eating once she follows Claire’s advice lie and pretends she’s carrying her husband’s baby. Eat up, Louise. EAT ALL THE ECLAIRS.

Jamie finally revealed himself, but don’t be alarmed – his fortress blew apart and he’s been hiding under a tiny blade of grass ever since. I was hoping for the truth about how he gets so much bounce in those ginger curls, but the man’s a tortured soul, I’ll take whatever honesty I can get.

With so many feels, it was full steam ahead on the bullet train to MacSexytown. Alas, I was more worried about the hickeys on Jamie’s thighs, and how he spent the evening counting to ‘soixante neuf’ with the whores. (I just Google translated that and it’s definitely not safe for work. Also, not a suitable name for a baby).

8) Fergus tells Murtagh he will die alone with his hand…

…eating a chocolate éclair while lying on a fake zebra skin, counting to ‘soixante neuf’.

Did anyone else think ‘The Duke’ was Sandringham’s first name? Asking for a friend.

10) Get your hands off Claire’s undercarriage

Remember the opening image of the man ‘fixing’ the carriage wheel? Look again, my friends, for I have rattled my sheep bones and can reveal – through the power of magic (mostly Preview) – the SAME HAND was involved in the attack on Claire and Mary. (It’s not a picture of a bum, honest).

Pretty sure I saw tongue.

13) We gotta fight for the right to par-tay

Every good party ends with a fight, and this was a highly choreographed corker. It was a tragic cross between a WWF title bout and The Wiggles go to Eighteenth Century Paris. Was it meant to be this ridiculous?

See how the Brown Wiggle flails against the menacing Captain Feathersword! Watch Ginger Wiggle ‘do the propellor’ and take Monsieur Random down with this flimsy curtain tieback!

Until next week, romp bomp a stomp, everyone.