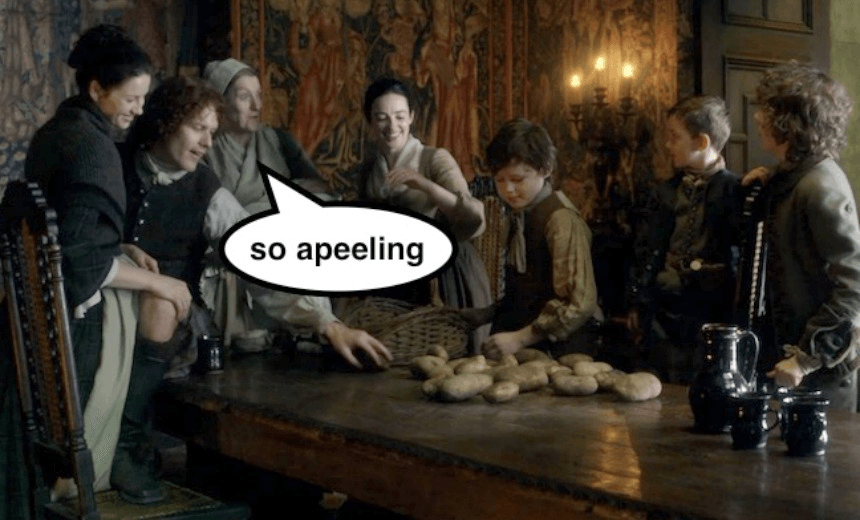 “Sing me a song/of a mash that is gone/say, could that mash be I”. That’s right, the Outlander opening credits now feature potatoes. It’s a great sign, because only good things happen when root vegetables are involved.

This week Jamie and Claire spent a delirious five minutes at Lallybroch reading French poetry to their new potatoes, before rocking over to Frasertown to persuade Jamie’s crank of a grandfather to join the Jacobite cause.

Memorable moments of episode eight: Jamie’s hair was THE BEST, Claire’s knitted wardrobe was to die for, and Fergus rode a donkey. Classic Outlander hijinks! Imagine the hilarity if we’d had one hour of Fergus’ donkey exploits instead of nine million mind-numbing conversations about the Jacobite rebellion.

Can’t we just sit down to a nice potato-top pie and talk the whole ‘rule by divine right’ thing through? No? Right, let’s get straight it.

1) Forecast for Jamie’s hair: call a state of emergency

Just jokes. This is actually a fox, because this episode is ‘The Fox’s Lair’, and Jamie’s grandfather is called ‘The Old Fox’. See what they did there? So clever.

2) Claire’s smiling, Jamie’s knees are glowing, and there’s so much happiness I think I’ll burst like a freshly baked potato

Stick some butter on me and I’m done.

3) On behalf of these men’s mothers, please put another layer on

Aren’t you cold? It’s SCOTLAND, for crying out loud.

4) My family also like to fangirl over new potatoes

I’m serious. Potatoes are a gift from God, or the supermarket, or whatever else your modern-day belief system might be.

Goodbye France, land of unpredictable ponytails and upsetting beards, and och aye to Scotland, where every blessed hair on Jamie’s head stands golden and glorious. Not a curl out of place, not a fake whisker to be seen. Forget the Rebellion, Claire united the clans to fix Jamie’s hair. I salute you, General.

6) “IT’S SO PEACEFUL HERE,” Claire yells over the loud rattle of a horse and cart

7) Why didn’t Claire take a tub of Napisan back in time?

Memo to self for season three, Claz. Those shirts are disgusting.

9) Jamie tells Claire to keep her mouth shut at dinner

You say potato, she’ll say potahto. Good luck with that.

They’d also earn bonus points for scything your hay once the battle’s over.

Jamie calls Simon Lovat his cousin but, if he’s The Old Fox’s son, doesn’t that make him Jamie’s Uncle Fox? Season two has way too many mammals to keep track of.

Uncle Fox is a timid little sausage, but a quick ‘keek’ down Laoghaire’s top, a poetry recital and some dirty talk about mushrooms, and Simon joins Jamie’s Jacobite cause quicker than you can say “try it, you’ll Lovat”. Foxes are such fickle animals.

13) Jamie reckons he’d prefer to be a beast

14) Finally, the seer had a terrifying vision of Jamie’s episode 7 beard