Duncan Greive explains what Daylight Creative is, the work it does and why it is a natural and necessary evolution of The Spinoff.

When The Spinoff was founded, one of its key principles was that we were a digital magazine – a place which would value tone of voice, creativity of approach, use multimedia storytelling techniques and prize strong visual aesthetics. We also believed that in the social web era, all organisations were publishers – but that most would find it difficult to know exactly what that meant.

The intersection of those two factors was how we planned to make The Spinoff work from a financial perspective. That in a digital advertising space dominated by Google and Facebook, the best chance at building a sustainable modern media organisation was taking the lessons we learned on our platform and working with other organisations to tell their stories better.

Today we announce the culmination of that journey: the founding of Daylight Creative – a content studio which takes the tools and lessons of The Spinoff and makes them available to partner organisations for use across their own channels. It also functions as the commercial arm of The Spinoff – ensuring that organisations which work with us get access to the same world class creative and client service as those who work with Daylight directly.

(A note for readers and members: Daylight has its own office and is a distinct team from The Spinoff, which remains editorially independent and reliant on its members for the largest part of its revenue. Daylight does share administrative and operational costs, allowing The Spinoff to run more efficiently and thus create far more than it otherwise could alone.) This reflects the radical changes which have impacted the marketing, advertising and communications industries over the past decade or so, as social media, streaming, smartphones and a huge splintering of audience behaviour has rendered mass culture largely obsolete. This creates huge opportunity and equally large risk for organisations which fail to grapple with this complexity. In general, we believe audience behaviour has run far ahead of the agency world’s response to it.

This is the other major motive behind the launch of Daylight. The studio is not starting from scratch – it grows from The Spinoff’s commercial team, and the work that Toby Morris, Dr Siouxsie Wiles and many others have created for the World Health Organization through the Covid-19 pandemic. What started as brief animations swelled to encompass data visualisations, shortform documentary, explainers, social tiles and much more, all translated into dozens of languages.

This is very meaningful work, and demanded the recruitment of a team to manage it. We found that others came calling, including public health agencies around the world. We soft-launched in January, testing the idea with some of The Spinoff’s existing clients, and are now ready to introduce it to New Zealand and the world.

Daylight Creative is very deliberately a studio, not an agency – we create work according to specific briefs from clients, and can work from small scale one-off jobs to large ongoing retainers. We specialise in modern editorial forms – bright, accessible writing across longform and shortform, podcasts, social video and tiles, data-visualisation, documentary, illustration and animation. 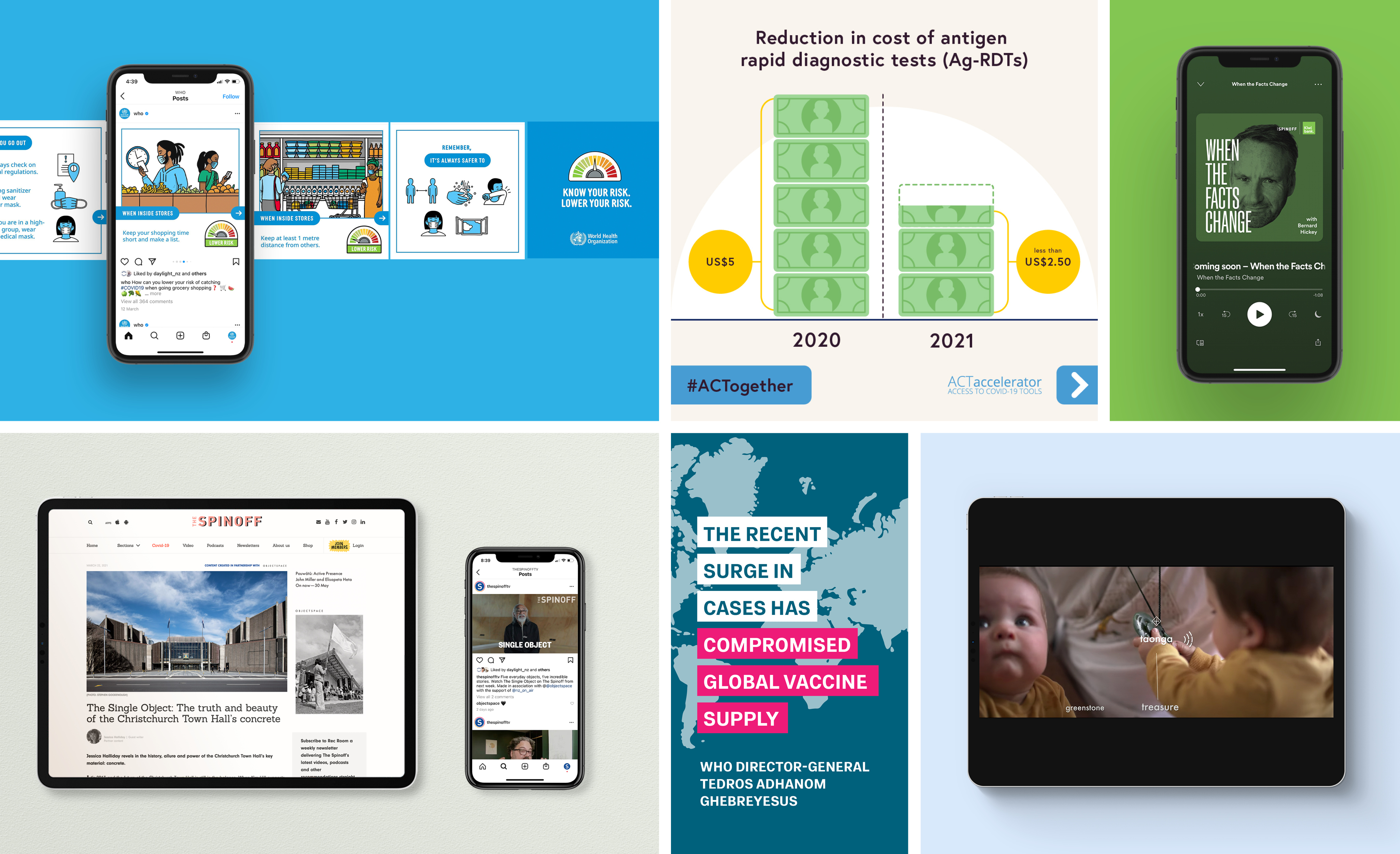 Daylight Creative is led by GM Lee Lowndes, former group business director at Colenso BBDO, who brings experience with The Monkeys in Australia and AMV BBDO in London. She works alongside Julia Arnott-Neenee, former global social strategy lead at HP in California and founder of the social enterprise PeopleForPeople.

They join our established creative team, led by the incomparable Toby Morris, creative director of The Spinoff Group, who picked up two more gongs at last week’s Voyager Media Awards. He’s joined by Simon Day, editorial director, and a team of account directors, illustrators, designers and writers to create beautiful, accessible and striking work for organisations at any scale.

It’s a huge day for The Spinoff Group, welcoming a new member to join our video team at Hex Work Productions and The Spinoff itself.

If you’re interested in finding out more, please say hello@daylightcreative.co.nz