It’s going to be tough to get people to give up Google, but one Silicon Valley entrepreneur is confident that a search engine without ads is the way of the future – even if we have to pay to use it. Hal Crawford spoke to him.

How many times a day do you use a search engine?

The ability to ask and answer questions from the world’s great indexes has become so intrinsic to daily life we barely notice it. You type in a query and get a ranked list back, with some ads on the top or sides.

It is hard to know exactly how many people are using search at any given moment around the globe, because Google and Bing don’t give out search query numbers.

Google, in particular, has an interest in keeping the figures close to its chest: it doesn’t need anyone emphasising exactly how enormous it is.

But by using publicly available information (see ‘A Query About Queries’ below), it’s possible to estimate that about half a trillion searches are being conducted every month, close to 200,000 every second. Google owns most of those.

Search is like air: it’s free, and it’s everywhere.

There’s a guy in California who would like to change that.

From ad-tech to ad sceptic

Sridhar Ramaswamy grew up in India, did a computer science doctorate in the US, and in 2003 landed a job at Google as a software engineer. He grew with the business, moving into ad tech and eventually taking control of the search giant’s advertising division. According to accounts of his time at Google, Ramaswamy led from the front, happy to get involved and able to roll up his sleeves and actually code. Ramaswamy was never shy of the detail, which is why when he talks about ad tech, you can respect what he says.

What he says isn’t particularly flattering. The man who presided over billions in ad revenue describes ad tracking as “pernicious” and the business beset by a structural flaw.

“I came to two realisations towards the end of my Google stay. One was that a primarily ad- supported product was in the long-term going to be out of alignment with the user. You see this with what has happened with Google search over the past 20 years. We started off with unobtrusive ads on the right, then there was the top ad, then they take up more and more space.

“And then the second part was online advertising in particular. One of the things that has made it very successful is conversion tracking. That’s a fancy word for [when] a click has successfully led to the action that [advertisers] had hoped you would take. The net result is that everything that we do online is tracked by a host of people.” Rather than join the legion of moaners, in 2019 Ramaswamy and Google colleague Vivek Raghunathan decided to “go back to basics” and founded a search engine company. The startling thing about Neeva, their engine, is that users will have to pay for it.

“Our bet is that – 20 years in – search is still enough of a valuable use-case that we can create a different and better product and convince people to pay for it.”

This avoids the structural flaw of misaligned incentives at one very big cost: making a search engine good enough to subscribe to. While Neeva is still in testing, on full release the subscription is likely to be between US$5 and $10 (NZ$7-$14) a month.

Ramaswamy is obviously a methodical guy, but he must also be brave. You have to admire his ability to stand back and follow the line of reasoning, and to put his professional life on the line in pursuit of this unicorn. He is Zooming with me from his house in Cupertino, and at times I see his wife moving around in the background. She’s a dentist, and they have two adult sons who have also become software engineers.

Ramaswamy thinks about the task facing Neeva in two parts. The first job is to get the search product to the point where people are happy to use it every day, regardless of price.

“That is not a trivial barrier to cross. If you think that some of the brightest people for the past 10-15 years have worked on Google search, there’s an element of humility that one needs to do the catch-up.”

At the moment Neeva has 55 employees, with more engineers joining all the time. The company has raised over NZ$80m and Ramaswamy says they will launch fully “in the next few months”.

The former Google exec says the most difficult technical search problem is ranking.

The second part of Neeva’s challenge is getting users to pay. The Neeva approach here is to personalise and present information in a way ad-supported search engines may find hard to mimic because they don’t have the trust of the user.

“You will pay when the product that you get offers a lot more value when it is yours in a way that a generic product is not.”

This sounds implausible when you first hear it, but Neeva does make a clean impression. The search interface uses Bing for baseline functionality, but on top of that there is personalisation and a great deal more re-packaged content – news, reviews, and so on – than a traditional search engine. Ramaswamy says he plans to avoid copyright disputes by entering into direct revenue-sharing agreements with content creators.

He brings up the case of subscription music business Spotify as further evidence that Neeva can work. Like Neeva, when Spotify began in 2006 it wanted people to pay for something they were getting free at that time, digital music. Like Spotify, Neeva’s approach is to offer a different and better experience.

“They came of age at a time when Napster was all the rage and all the music you wanted was sitting on your computer … I’ve had a number of fascinating conversations with them.” 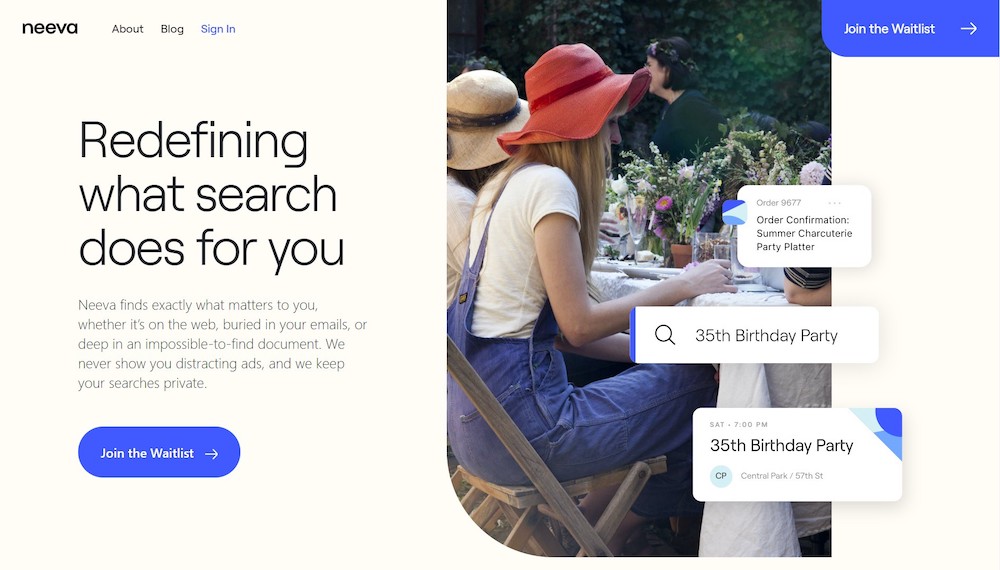 I put it to Ramaswamy that regardless of privacy, I am unlikely to want another subscription to add to my already sizeable pile (as detailed in this story about the state of advertising-backed media). He agrees that subscription proliferation is a problem, and makes an interesting observation about “bundling and unbundling” – implying an opportunity in the market for grouping internet services together – but also counters that because search is used many times every day, it may take payment priority.

Regardless of payment friction, a key Neeva vulnerability will be the extent to which ad-supported search engines can simply copy its functionality. While Ramaswamy has his answer to this – that his team will continue to innovate, and that the competitive set is very small – it feels like a high-risk area.

“The nice thing about a team like Neeva is that the entirety of my team is focused on creating the product and defending any success that we have with it.”

In an era where ad-tech and tracking has become widely disparaged, perhaps one of Neeva’s biggest assets is mounting distrust.

“What has gone wrong in the last 20 years of tech is this belief that all option value needs to be preserved. All pieces of data need to be collected. And that companies are free to use them in whatever manner that they choose. In my mind, stuff like this leads to a large-scale distrust of all tech companies.”

Postscript: A query about queries

When you do a Google search on how many searches Google answers every day, the answer you get isn’t from Google and it isn’t accurate. The top result, from the site Oberlo under the headline “10 Google search statistics”, cites a 2019 estimate of 3.5 billion searches a day.

When you go the old fashioned way, and ask Google directly through its communications team, the most they are permitted to say is that they do billions of queries a day and trillions in a year. This really isn’t good enough.

The best approach I could come up with was to work backwards from publicly available data on DuckDuckGo query volume combined with market share for search engines. The DuckDuckGo query numbers are 100% accurate, bless them, and the market share numbers are taken from StatCounter based on several million tracked users. Here’s how query volume panned out for April 2021:

You can see that, by these calculations, Google is doing about 180,000 queries globally every second. That feels plausible to me, but it’s worth noting the number is hugely dependent on the market share estimate from Global Stats. We can be confident, at the very least, that Google is answering over 100k queries every second.

As an aside: isn’t it interesting that a query about queries should underline the unreliability of queries?