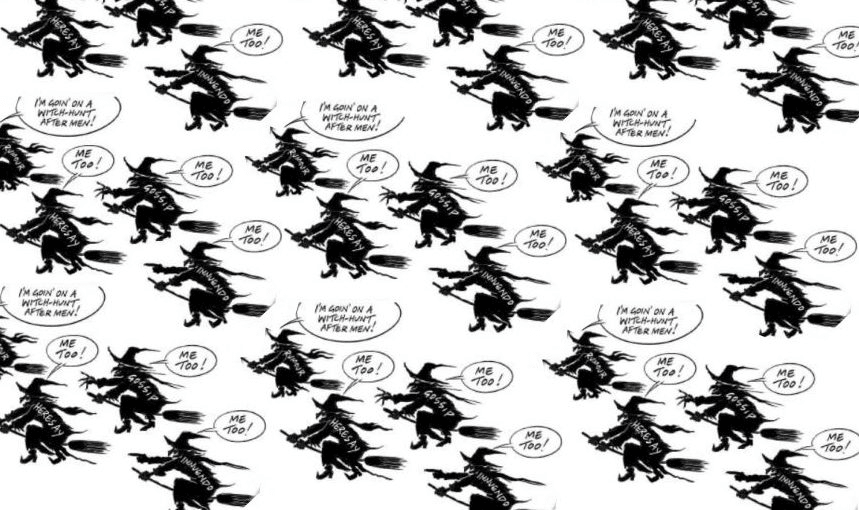 About that awful witch cartoon…

By Alex Casey and Leonie Hayden
Guest writer
Made possible by

Two witches at The Spinoff respond to Al Nisbet’s terrible cartoon this morning, one which is not only confused about the meaning of ‘witch hunt’ but could also work to silence women emboldened by #MeToo.

What in the name of Anjelica Houston’s wig is this?!

Look, we honestly don’t know. We’ve tried burning it at the stake, chucking water on it and throwing it in a lake to see if it floats, but all we got were some very broken laptops. Because witches aren’t real and witch hunts aren’t real. The only thing that is real is this cursed attitude, held mostly by terrified men and confused French actors as they gurgle into the void about the rapidly-changing world around them.

It’s a witch hunt! It’s a goblin chase! It’s a Kraken quest! Never mind the real world survivors who might wake up feeling brave enough to share their own experiences of harassment and abuse. Never mind that seeing a shitty cartoon wedged in the letters section over breakfast might dissuade them from ever speaking up, should they be labelled a gnarled sorceress of lies.

Wait, so who is the real witch in the cartoon?

Oh and: the witches are also the men, because the witches themselves are on a witch hunt for witch men.

Great band, bad spelling. To take a step back: has this Al Nisbet joker done stuff like this before?

Al published two other super offensive cartoons in The Marlborough Express and The Press newspapers in 2013 about how fat, bludging Polynesians will eat all the free school lunches and spend more money on pokies. Labour MP Louisa Wall tried to appeal to a Human Rights Review Tribunal on the grounds the cartoons reinforced negative, racist stereotypes, but they said it was fine. She took it to the high court, but they said it was fine (just go away and think about what you’ve done). Basically, a whole bunch of people in charge think racism is cool and Nisbet is clever. They’ll probably defend this too. We’re fucked. Lock us in the bunker from Unbreakable Kimmy Schmidt and throw away the key imo.

BUT WHAT ABOUT FREE SPEECH?!

Stuff (formerly Fairfax), who publish these newspapers, are totally hot for free speech. While defending a columnist who reckoned traditional Māori knowledge was ‘religion’ and a ‘bad joke’, they compared their crusade for freedom of speech to the plight of slain Maltese journalist Daphne Galizia, who was assassinated for her ongoing exposure of political corruption, and who definitely died thinking ‘Jeez, I hope someone uses my death to defend a racist hot take by a dryballs old hedgehog enthusiast.’

No, but seriously, freedom of speech is pretty important.

Freedom of speech means you can say what you want without fear of reprisal or oppression from the state. No one is guaranteed time or space under the New Zealand Bill of Rights Act to express those views on a media platform – that’s a decision made by private groups and individuals. If Stuff want to host this kind of content, that’s their right. But maybe don’t hide behind freedom of speech. Just say it’s because you’re cool with it.

Yeah but but but what about balance?

Like when you see a climate scientist and a guy that read a few articles and started a Facebook group called GLoBaL wARMiNG CaN’T MeLt STeeL BeAMs cited in the same story “for balance” – that’s an editorial decision. If you think a dude doodling some witches from the comfort of his armchair is on balance with a serious, long-term investigation into the sexual harassment and assault of women, we don’t know what to tell you. It ain’t.

Yeah. A most powerful and excellent head witch, Alison Mau, announced on February 28th that she would be launching a national #metoonz investigation with Stuff into sexual harassment in NZ workplaces. Interestingly, none of the writing about the #MeTooNZ project involves the words “rumour” “innuendo” “here’say” or “gossip” –  more phrases like “rigorous” “cross-check” and “corroboration.” Hmm, sounds like hocus-pocus but OK.

So why is crapola like this still floating around?

This is the part that is much, much freakier than anything we Wiccan folk can throw together with a lock of hair and half a burrito. Each one of these hateful, confused, steaming opinion turds from the Nisbets and Hoskings of the world contribute to the daily shit pile that survivors of harassment and abuse have to wade through every day. Eventually, you might just encounter one shit pile too many and decide to turn back, because the stench gets too much and the light at the end of the sewer seems too far away. What we’re trying to say is: it’s a bad cartoon.

Le sigh. Are there any useful New Zealand cartoons about #MeTooNZ?

The terrible thing is the ordinariness of it. I’d like so much to not have to warn my daughter about this stuff.#MeTooNZ #MeToo my @SundayStarTimes @NZStuff #cartoon @Alisonmau #sexualharassment #predation pic.twitter.com/7uaYjafvCl

Update 6 Mar: This story has been updated to include links to the Human Rights Review Tribunal and the High Court’s decisions on Wall v Fairfax.