When Covid deniers and vaccine sceptics contact him to complain about his show, RNZ broadcaster Jesse Mulligan always responds. In the process, he writes, he’s come to some realisations – though not exactly the ones his correspondents were hoping for.

“Your a Fucking joke mate, an absolute scum of the earth joke. I don’t want the jab. Why the fuck should I have to get it to keep my job you piece of shit. Fuck you”

Things are pretty spicy in the ol’ DMs right now. But not everybody is as stirred up as this guy. Some of my correspondents express something more like polite confusion: they can’t understand why I’m not asking the right questions about the vaccine when I get the chance. Often they don’t blame me for it, instead expressing sympathy that I work in a media environment where I’m not allowed to speak the truth.

They’re wrong about that. Most people working in media in 2021 know how rare it is to have the boss express any view on what we’re saying – you’d almost welcome it, for the variety. But as I stare at the wall each day wondering what else I personally can do to get first jabs up towards 90%, I wonder if we could learn something from the people in my DMs.

I reply to them (I know, but I do). I want to know where our views are diverging, whether there’s any simple factual error they’ve made that I can correct. Sometimes I try and do a deal: “Is there any evidence I could show you that would make you change your mind?” I ask, using a simple test for sorting a pure conspiracy theorist from somebody who’s acting in good faith. “For example,” I continue, “if you showed me a peer reviewed study that supported Ivermectin as a treatment for Covid, I’d change my view on it.”

He sent me this. It’s just one metastudy, but it’s peer reviewed, published in a legitimate academic journal and has strong positive conclusions around Ivermectin.

In return, he said he might change his mind if he saw some long term research on the safety of the Pfizer vaccine. Though the new Covid-19 vaccines are amongst the most scrutinised pharmaceutical agents on the planet at present and vaccines such as Pfizer are subject to multiple forms of post-marketing safety monitoring, the vaccine was only invented last year, so by definition long term studies don’t exist yet. Touché my dude. 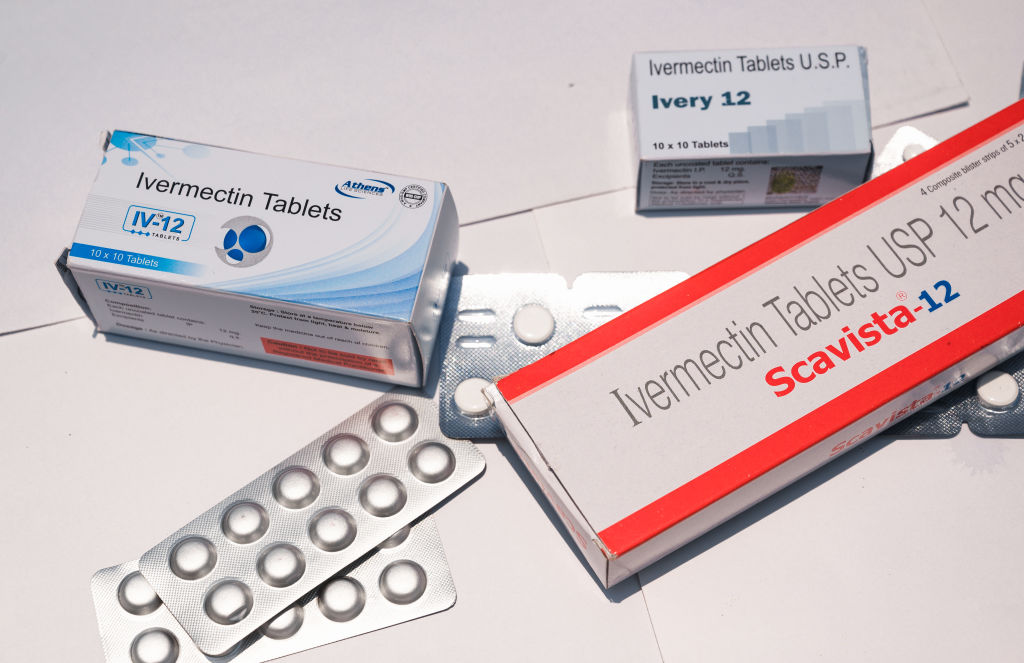 Generic Indian versions of the anti-parasite drug Ivermectin, which some people are taking to ‘treat’ Covid-19. (Photo: Soumyabrata Roy/NurPhoto via Getty Images)

I haven’t become an Ivermectin guy (the international benchmark Cochrane Database of Systematic Reviews says “we are uncertain about the efficacy and safety of ivermectin used to treat or prevent Covid‐19 … the completed studies are small and few are considered high quality”), but it’s an interesting social exercise to look at coverage of that drug in the popular press. Believe me, speaking as a comedy writer, when ex-Fear Factor host and current douchebag magnet Joe Rogan tells you he’s taking a medicine used to kill parasites in horses, you immediately say a little prayer of thanks. “I’ve been rubbing the Ivermectin on my gums like you told me,” went one reported conversation with an elderly relative. “Any idea when the blindness will subside?”

This stuff was just too good, a brilliant example of how stupid Trump voters can be; an irresistible image of red-state goons raiding the local stables and gobbling deworming paste designed for sick ponies. Why don’t these people listen to the science?

The problem with a great punchline like Ivermectin is that the laughter tends to drown out the quiet voice of science too. How is my polite DMer meant to square the fact that while we’re all ridiculing these idiots, he’s reading on a legitimate news website that Oxford University, funded by the British government, is running a large scale trial into the effectiveness of Ivermectin in Covid-19 patients? He might have it wrong that we’re too scared to mention a trial like this on TV but, to be honest, asking people to be open-minded about the drug on Twitter right now would be suicide.

Do you personally hope that the Oxford study concludes Ivermectin is useless against Covid? What does it say about us that we’ve become emotionally invested in the failure of one particular medication? Does it make it easier to understand some people’s opposition to the vaccine if you think about your own intransigent response to people pushing Ivermectin?

Last week the Guardian science editor reported on a study which found teenage boys are at more risk of going to the hospital from Pfizer vaccine side effects than from Covid-19. Professor Michael Baker (who generously agreed to fact check this essay before publication) tells me the study is “highly contentious … has not yet been peer reviewed and does have a lot of potential weaknesses,” but it presents a bit of a pickle. We’re in a mode of such unambiguous endorsement for the vaccine, that you might (as a broadcaster, science communicator, politician) decide you’re better to keep the message simple – “get the jab, it’s safe”. But what does that look like to the mother of a 15-year-old boy who gets her info via legitimate news sources shared on Facebook, and sees a disconnect between what she’s being told on the news and what the science is (at first glance) suggesting?

I was surprised to get direct messages urgently informing me that you can still catch and spread the virus even if you’re vaccinated. People honestly think we don’t know this. So what’s going on? Should our cheerleading around “the vaccine is our way out of this” become more nuanced, like “it’s the worst cases of Covid that we’re worried about and the vaccine will stop those ones pretty effectively”? Or is this just a symptom of polarisation, that any apparent weakness in the opposition’s armour (“the vaccine isn’t perfect”) leads to a more aggressive attack?

I made a mistake on live radio the other day (this happens from time to time, though usually the stakes are a little lower than people dying in the streets). I mentioned that I’d been diagnosed with shingles, a middle-aged chicken pox flare up, and several people texted me to tell me it was a known side effect of the Pfizer vaccine.

In the spirit of transparency I decided to mention these texts with a promise that I’d take a look at the evidence around this and find out if it was true. In fact it’s not true, but by the time I’d lined up my facts god knows how many listeners had gone to do something else, hearing only the part about a possible link between the vaccine and that really painful thing their mother’s friend had gone through. While I carefully debunked the connection, people were already calling the radio station to complain about me spreading anti-vax propaganda. A lie travels around the world while the truth is lacing up its boots.

I sent an early version of this essay to a writer friend who replied: “To someone who didn’t know you well, and that you were 10,000% into the vaccine and the science, is there a danger the piece could be read as you being intellectually conspiracy-curious?” (Everyone needs a friend like this by the way, someone who will point out that you might have it wrong, even when all you wanted was blind praise). So let me have a go at landing this aircraft (the wreckage of my previous attempts still visible on the runway).

There are undoubted bad guys out there. People who both feed on division and spread it, people who exploit the most vulnerable and disaffected New Zealanders by reinforcing fears they might already have about government institutions, intellectual elites and mainstream media. These are the real enemy – the ones not looking for truth but for lies that suit them (a friend in conservation tells me “the anti-1080 pages have gone into maintenance mode while their subscribers are off down the Covid rabbit hole”).

But within our missing 20%, I think, there are a lot of people who get a bit of news from Mike McRoberts, and a bit from their uncle on Facebook. To fully arm people like that I think we should sometimes be open to nuance in our messaging – not blame them for having acquired some conspiratorial views, but gently offer them evidence which might persuade them vaccines are what we know they are: safe, effective and very necessary.

Perhaps we also need to remember that information is only half the story. Kate Hannah, in her piece about how to talk to loved ones about the vaccine, counselled us not to bombard them with facts but to first treat them with “patience, respect and aroha”. That’s great advice for changing someone else’s mind, but it might have unexpected benefits for us too. I told you that I reply to anti-vaxxers to find out what they think, but I’ll admit there’s also a quiet peace that comes from connecting with how they feel.

Online and IRL we’re often our worst versions of ourselves when we’re emotionally invested in an argument. Maybe it’s worth taking the people we disagree with seriously, not just because of what that might nurture in them but because of what it might nurture in ourselves: a greater willingness to check our assumptions, to accept or reject new information thoughtfully when it arrives and to make sure we don’t lock in our thinking at a time when the world most requires an open mind.

This piece has been updated to triple underline that Mulligan himself is extremely pro-vaccine.