Our beginner’s guides are quick and simple explainers on everyday money topics hitting headlines right now. This week, we take a look at the new $20 minimum wage.

What is the minimum wage and where did it come from?

The minimum wage is the lowest amount of money employers can legally pay their workers per hour. Its main purpose is to protect workers against extremely low pay from exploitative employers and to ensure everyone is equally and fairly paid for their work.

New Zealand was the first country in the world to establish minimum wage laws back in 1894, shortly after the country’s first big nationwide strike. The strike saw 8,000 port workers walk off from their jobs in protest causing massive disruptions to the country’s trade and transport networks. Anxious to avoid further crippling strikes, the government at the time passed the Industrial Conciliation and Arbitration Act which paved the way for the minimum wage we know today.

What is the current rate in New Zealand and how does it compare internationally?

In a global context, New Zealand’s minimum wage as of last year ($18.90 per hour) was the third highest among OECD countries behind Australia ($21.06 per hour) and Luxembourg ($21.67 per hour) but ahead of countries like the UK, Ireland, Germany and France.

Who are our minimum wage earners and how many of them are there?

Women make up the majority of minimum wage earners (63%) followed by part-time workers and young people. Māori and Pasifika are more likely to be paid the minimum wage than other groups of workers, as are individuals without formal qualifications, disabled workers, and refugees or migrants. Many work in industries such as retail, food service and hospitality working as the shop assistants and waiters we see every day.

Why did the government decide to increase the minimum wage this year?

Increasing the minimum wage was a commitment the Labour Party made ahead of the 2020 general election. It was also part of the Labour-NZ First coalition agreement struck in 2017. Labour’s argument is that an increase, which puts an extra $44 a week before tax into the pockets of full-time minimum wage earners, will boost the incomes of our lowest-paid workers who in turn will help stimulate the economy through increased spending.

By law, the government is also required to review the minimum wage rates every year. The objective of the review is to “keep increasing the minimum wage over time to protect the real income of low-paid workers while minimising job losses” (real income refers to how much money an individual or entity makes after accounting for inflation, or a rise of average prices through the economy). Since 1997, the minimum wage has increased almost every year but has gone up significantly since 2017 (27%). 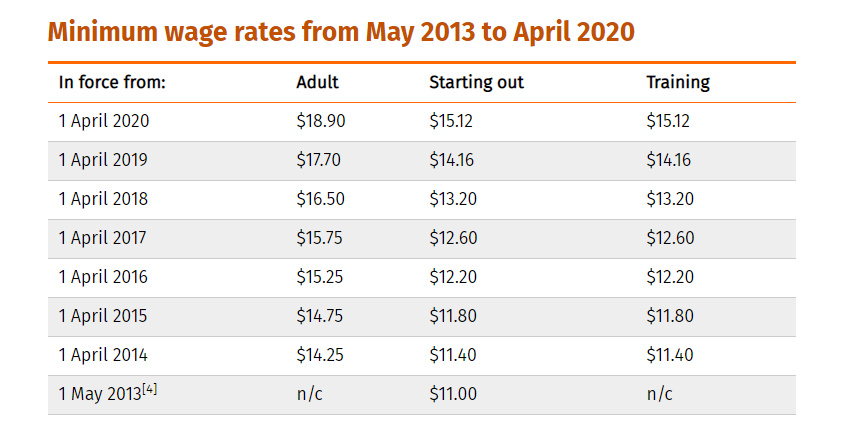 Is increasing the minimum wage a good thing?

Supporters argue that a good minimum wage benefits not only workers but businesses and the economy as well. Their main argument is that it helps improve the overall standard of living for thousands of people by equipping them to better handle the increase in the cost of living. In turn, businesses benefit as employees become more productive and more likely to stay on in their roles. Another argument is that those on lower incomes tend to spend rather than save every dollar they get which flows on to businesses and the economy to give it a much-needed boost.

Opponents argue that increasing the minimum wage raises costs for businesses. More costs for businesses means having to increase the prices of products and services which raises the cost of living, negating any advantage gained by workers having more money. Opponents also argue that higher business costs fuel unemployment as it discourages employers from hiring more people and, in some cases, forces them to let workers go.

In the current climate of Covid-19, many businesses have strongly opposed the minimum wage increase going ahead. They say employers are already under enough financial pressure due to the pandemic, particularly in key industries such as hospitality and tourism which have struggled in the last year. The Ministry of Business, Innovation and Employment also advised the government to delay its increase until October 2021 and reduce it by 25 cents due to “economic uncertainty”.

But unions argue that Covid-19 has hit low-income households the hardest. The government has also argued that many New Zealanders on the minimum wage, such as cleaners, security guards and supermarket workers, have gone “above and beyond” during the pandemic and “deserve a pay rise” for their crucial roles.