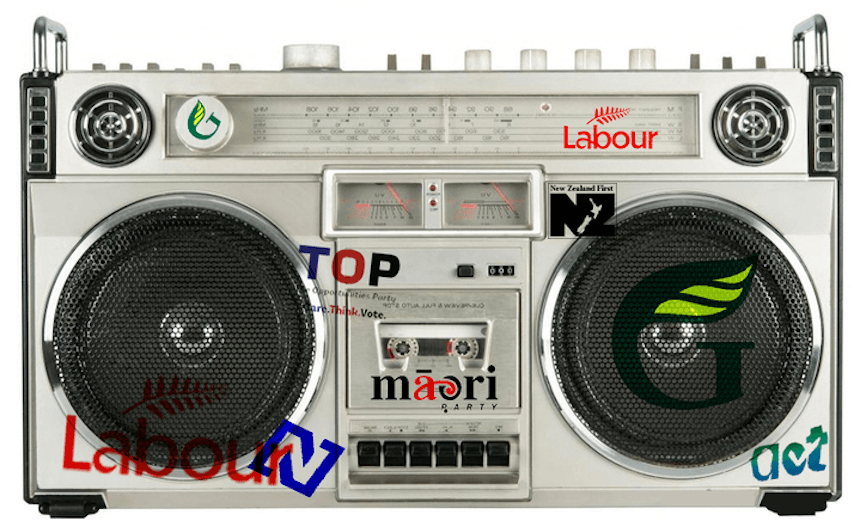 * Not really. We freely admit this entire playlist is a work of speculative fiction.

A source tells the Spinoff that, despite the trouble caused by the party (allegedly) ripping off this Eminem motivational classic last election, Bill English is still frequently playing ‘Lose Yourself’ on repeat over the campaign office’s UE Boom. Multiple sources confirm John Key told English that the song was an integral part of his preparation for campaign events. And after months of struggling to come out from his predecessor’s shadow, we’re told English is going “full Key”, even delighting in telling his staff that, after the rise of Jacindamania, he’s now more “keyed in” to the election than ever. “You only get one shot, do not miss your chance to blow,” he told staffers in a stand-up morning meeting earlier this week. When Judith Collins told him he had in fact missed his first shot to blow in 2002, English said he wouldn’t deny the accusations he’d previously lost a general election, but cannot recall ever running for prime minister and certainly no longer retains any evidence relating to that incident.

Contrary to snarky leftist Twitter, we’re told Bill English was already privately known amongst his party’s inner circle as The Rock and that Ashford & Simpson’s classic ‘Solid’ is often the last song played when Friday drinks get out of hand.

A Labour party intern tells us of the search for a new campaign song for the Jacinda Adern era: “The other day, before our hangovers had subsided, me and a few other interns had to sit and listen to every song on Spotify called ‘Let’s Do This’. And guess what? None of them are good. None of them! The Hannah Montana one is probably the best – definitely better than the Todd Rundgren one – but it’s probably too expensive to license and no-one wants a repeat of that whole Eminem thing. I ran a banging trance track up the ladder to leadership but was told it was ‘too relentless’. I think we settled on this group Fulanito, who I’d never heard before, but I think it represents our re-energised party.”

We’re told that spirits are understandably high inside Labour’s campaign office. “Get it?” a campaign insider says. “Jacindi Lauper? Jacinda, Cyndi. Jacindi? We were lost and we found Jacinda. And when we fell, who was there, waiting to catch us?”

“Tame Impala used to be a big hit on the office stereo,” a campaign volunteer tells the Spinoff. “The vague stonerisms, the lush production, upbeat but not too upbeat. Everyone loved it! It bridged a gap between me and my younger volunteers and the older lot who just wanted to play Bob Marley and that one Crosby, Stills, Nash and Young record all the time. So, after a rough week this week, I put this on ‘cos it’s a fucking jam and it did not go down well. Like, at all. James walked over and turned the stereo off without saying a word. It took me a minute but then it clicked. My bad. My bad.”

“A few weeks ago, we were the one with the fast car and Labour were the ones wanting to get away from their problems,” says a source with close connections to the party leadership, who, unprompted sung the first few lines of Tracy Chapman’s incredible ‘Fast Car’: You got a fast car / I want a ticket to anywhere / Maybe we make a deal / Maybe together we’ll get somewhere / Any place is better / Starting from zero got nothing to lose / Maybe we’ll make something / Me, myself, I got nothing to prove. “Now, I fear that Jacinda is the fast car, and we need her more than she needs us.”

“We all know who we’re here to appeal to,” says a list member of NZ First who asked not to be named in case they actually get elected. “Better than anything else, Winston knows what his supporters like, and knows what they like in him. So if there are any outsiders around when we’re having a few drinks, he’ll put on some oldies – Tem Morrison, Sinatra, that sort of thing – but what might surprise you is that Winston actually keeps up with pop music. I think it’s from spending time with his grandkids. Anyway, the funniest time we had recently was when he put on Rihanna’s ‘Needed Me’ and danced around pretending to sing the chorus to pictures of Bill English and Jacinda Ardern. Classic Winston!”

According to multiple sources inside the party, Te Ururoa Flavell and Marama Fox are actively looking for a campaign-related follow-up to last year’s viral sensation – the pair’s ukulele version of ‘Santa Baby’. While our reporting remains inconclusive, we are told that the current front-runner is Aaradhna’s ‘Wake Up’, modelled after a version recorded by the Wellington Ukulele Orchestra which has been dominating the office stereo. We can’t wait to hear it.

Evidence shows that Beyonce is amazing, so it’s no surprise that a deep cut on her now-overlooked album 4 is getting played a lot in one of Gareth Morgan’s empty houses/campaign headquarters according to a “well-connected” supporter with a Bernie Sanders avi and an ‘Uber but for craft beer’ start-up. “Love is a metaphor for evidence-based policy @top_nz @garethmorgan #nzpol,” the supporter tweeted at the Spinoff.

A Young ACT member, who wishes to remain anonymous for fear of jeopardising a possible number two list placing in the 2020 election, tells the Spinoff that when David Seymour gets excited he likes to put on the Beatles’ ‘Taxman’ and sing along enthusiastically with his tie loosened and his sleeves rolled up. “’See – even hippies hate paying tax!’ he tells us during Paul McCartney’s scorching guitar solo.”

Bob Dylan – ‘You’re Gonna Make Me Lonesome When You Go’

“A week or so ago, the night the 1 News Colmar Brunton poll came out and ACT was on 0.3%, I left for the day and got to my Porsche Cayenne before realising I’d left my car swipe thingy in the office,” the same Young ACT member says. “So I walked in and there was no-one there except David [Seymour] and Beth [Houlbrooke]. They were just sitting there, staring at the floor, listening to the Bob Dylan song my dad used to play when my mum left him for a bit a few years ago.”

We tried to find someone in the United Future campaign who would talk to us off the record, but with no success. We couldn’t actually find a campaign per se. After Bill English all but guaranteed Peter Dunne’s return to parliament by pulling out of the Ōhāriu electorate, it appears that the election is effectively over for Dunne and his United Future party which, at 0.1-0.2% in the polls, appears not to have much of a future beyond Peter Dunne at all. Failing to find someone to talk to us about Dunne’s listening habits, we drove out to United Future’s campaign headquarters and, peering through the window, found nothing there but an unattended desktop computer from the early-’00s.