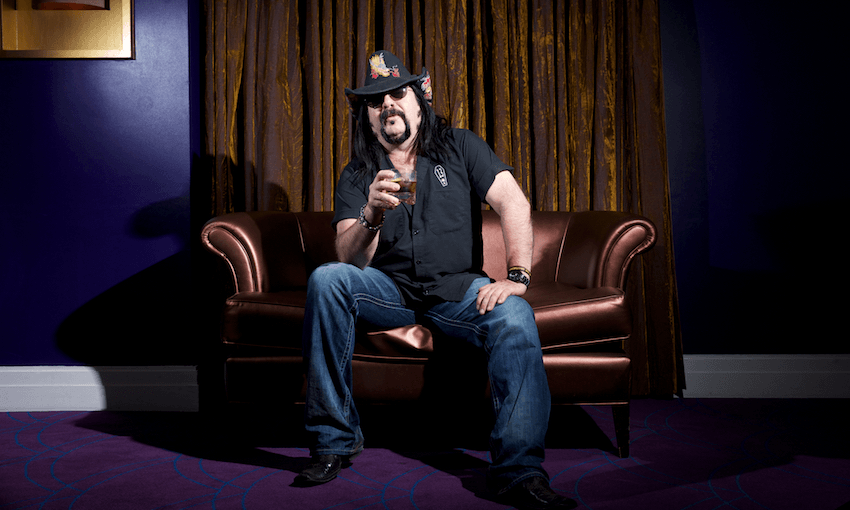 Drummer Vinnie Paul at the Sanctum Hotel in London, taken on June 13, 2012. Paul is best known as the drummer with Hellyeah and influential 1990s metal group Pantera which he formed with his brother, Dimebag Darrell Abbott. (Photo by Will Ireland/Rhythm Magazine via Getty Images)

Drummer Vinnie Paul at the Sanctum Hotel in London, taken on June 13, 2012. Paul is best known as the drummer with Hellyeah and influential 1990s metal group Pantera which he formed with his brother, Dimebag Darrell Abbott. (Photo by Will Ireland/Rhythm Magazine via Getty Images)

The metal community is in mourning following the loss of Vinnie Paul aged 54. Co-founder of the timeless Pantera, and drummer for Damageplan and Hell Yeah, Vinnie was a metal god. Emily Writes pays tribute.

When I logged onto Facebook this morning it was one of the first things I saw. “Vincent Paul Abbott aka Vinnie Paul has passed away,” a statement on the Pantera Facebook page read. “No further details are available at this time.”

The next thing I saw was a photo of Vinnie and his beloved brother Dimebag Darrell. “Together again,” the caption said. It was posted by one of the kindest men in metal, Rob Halford of Judas Priest.

It’s ironic that one of the first posts I saw from my community was Rob’s. Queer icon of the scene that I once thought of as just Angry White Boy music full of dudes who hated “ousiders”. I was very wrong about that.

I was introduced to metal at 17 by my now-husband.

Over a box of Tui, the bogan courtship was a journey through metal – he played early Black Sabbath (which I loved), Ozzy (which I loved), Dio-era Sabbath (which I loved more), Motorhead (not ‘Ace of Spades’ – “the good stuff”), and Iron Maiden (I became obsessed). He worked his way through to Slayer (which I didn’t care for), Metallica (which I like some of), and Pantera. When he put on Pantera he, my man of very few words, said “this means a lot to me”. He put on Cowboys from Hell and we listened to it through.

I imagine it was just that I was lovestruck that I said it was “really good”. Because I don’t actually like Pantera.

But watching this boy I was falling for close his eyes and nod, pointing his finger at the boombox at the bits he liked the most – I realised that to know him, I’d need to know Pantera.

I made an earnest attempt but the thing that I connected with most was the relationship Dimebag and his brother Vinnie had. I loved watching Pantera bootleg gigs on VHS. The chemistry between the two was incredible. I loathed Phil Anselmo. But I could have watched Vinnie and Dime all day.

On stage they were beautiful. Two awkward but boisterous guys who turned into children when they were in front of an audience. They hugged each other and kissed each other on the cheek – when they posed with fans it was often in huge bear hugs.

From the outside metal seemed like a home of toxic masculinity. Inside the community I felt completely accepted and always safe at gigs. Pantera – the music – was righteous fury, but it didn’t feel dangerous. You couldn’t wipe the smiles off a fan’s face as they would recall the one time they saw Pantera live or the first time they heard Vulgar Display of Power.

My husband would talk about their 1994 gig at the Wellington Town Hall all the time. His mum dropped him off concerned about sending her boy into the pit. Years later she told me, “I wanted to buy him the CD and I asked for Pantera From Hell and they thought it was very odd I was buying it.” For years, she called Pantera ‘Pantera from Hell’, a mish-mash of Cowboys from Hell. She frowned at her precious son with his tee-shirt covered in marijuana leaves with bearded furious men on the front.

But she never stopped him listening to it. She likely saw what I did – how much of a release it was, to listen to the words written just for you. Angry but freeing. Furious but true. Devastatingly hopeful.

A decade later, we were on a ferry to Manly in Sydney for my sister’s wedding as I read the news from the paper to my husband. It was a game we used to play, I’d try to get his attention by reading out headlines or intros. “Women finds parasite in her face” or “A koala chlamydia spike has rocked the Northern Territory”.

“A gunman has shot to death a band member on stage…” My husband looked up “crazy, what band?”

The next line said Darrell Abbott and I looked up, tears already forming. “Oh honey.” He looked concerned. “It’s Dime.”

I’ll never forget his face when he heard. It will stay with me forever. It’s impossible to get across how devastating it was for the community when Dimebag was murdered. Our first thoughts were with Vinnie.

The community closed in, as it did again with the tragic loss of Ronnie James Dio, and then again with Lemmy. But their deaths, sudden as they felt, were nothing like the vulgar sucker punch that Dimebag’s death was.

We had saved our pennies to come over from New Zealand for the wedding, and it was the first time my husband was meeting my sister and family. He was in despair the whole trip. Totally shell-shocked.

Fourteen years later, my sister and husband are very close, and she sees him for the gentle and kind man that he is. Back then, he was just this skinhead-looking dude mourning some guitarist instead of celebrating a wedding.

Vinnie’s death hurts; it brings back that pain of Dime’s death. So be kind to your black-clad friends today. On the outside, it’s easy to form judgements about metalheads. But they’ve always been kind and open and loving as I’ve known them. My husband’s favourite way to describe good people is “simple”. Be a simple man/be someone you love and understand.

Simply good. And this is simply heartbreaking for some very good people.

Vinnie and Darryl. Together again, well I hope so. Though us bogans aren’t known for our religious beliefs, we do know friendship. And Vinnie felt like a best friend to many. The guy who will squeeze your shoulder and say “are you OK dude?”

At a time when we lose so many men to suicide, we need more men like Vinnie.

His music was that check in, that release. It was like he was saying: It’s OK, that everything fucking sucks sometimes, have a drink, be with your friends, fuck all of that. It’ll be OK. I’m with you.

And now he’s not. And we’ll keep living on in the space, with that legacy of his – love your brother.

Maybe the words of Vinnie’s HellYeah are a better tribute than anything we can say:

So many times,
So many days,
You helped me through,
Walked me through the rain,
So many tears,
Have washed away,
If you can hear my voice,
There’s something I have to say…Thank you brother.