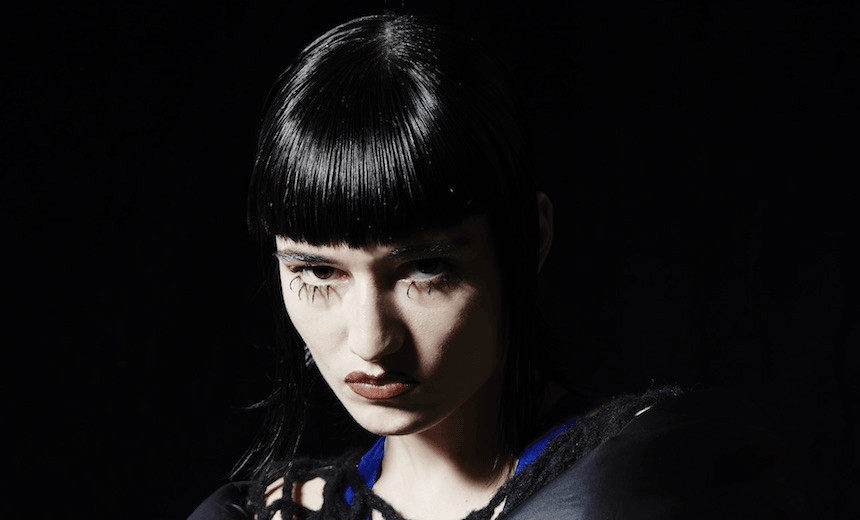 The return of October, the local artist behind one of last year’s best lost pop songs

Henry Oliver talks to Auckland-based producer/singer/artist October about her new single ‘Pure’ and the return of the guitar.

A year or so ago, October’s single ‘Cherry Cola’ struck me out of nowhere. Someone tweeted it, I clicked on it, put it on repeat, and within days it seemed all sorts of people were tweeting about it: Lorde, Lontalius, probably other amazing artists beginning with L that I can’t remember now. It’s was cold and funny and harsh and catchy as anything.

Finally, someone had combined feedback, clanging chains, tinny drums, blown-out bass and fuzzed-out synths with enough melodic sweetness to turn the whole thing into a goddamn pop song. It was one of those songs that you didn’t know you needed and then there it was, filling a gap that hadn’t existed before it wedged itself into your life.

And then… nothing. No more singles followed. No EP, no album. People I know ‘in the know’ didn’t seem to know what was happening or when it would happen. From social media, it looked like she was recording a lot, in bedrooms, in fancy studios, in LA! And now, after over a year, here it is, ‘Pure’, the first blistering single from October’s forthcoming but yet to be announced album, which will be out sometime soon, hopefully.

How does it feel to have music coming out into the world?

It’s been a year I think, more than a year. Currently, I’m in the terrified phase but I’m feeling pretty excited to finally get the ball rolling after what feels like such a time of preparation. Since the beginning of the whole writing process, it’s been eight months.

So the first thing that struck me about ‘Pure’ is the guitar. There’s a lot of guitars! I feel like guitars are coming back.

It was sort of uncool at one point, eh?

Yeah, but they seem to be coming back as an accompaniment, or as a textural element rather than a focal point.

For me, there was a bit if discord between what I really enjoy listening to and what I was making. So I really like listening to post-punk from the ’70s, ’80s, even the ’90s. I love the Cure and I love the Smiths and I love Joy Division and bands like that and they’re considered rock bands but a lot of the time they’re utilising synths so it’s this amalgamation of electronic and traditional rock instruments. I wanted to take that ethos and push it through my filter of electronic production and put in a modern context and see what happens.

Like those bands, you seem to be asking some big, existential questions lyrically.

‘Pure’ was one of the last songs written. Apart from the obvious religious connotations that there are, on the whole, it’s about rejecting everything about what it means to be pure. For example, I was thinking a lot about what it means to be a true musician, like “It’s all about the music, man”, music being this pure thing that you shouldn’t taint with or touch with commercialism or branding. Am I not a true musician when I consider my brand a little more?

I was also thinking about what it means to be a female, to be feminine, to be a feminist. Because I don’t think I’m a stereotypically feminine girl. What does it mean to be feminine? To be gentle and forgiving and lovely and sweet? I don’t really want to be that, but I’m still entirely feminine and I’m still entirely female, I just don’t think about my image in terms of it being palatable to men. I like being a little messy and rough around the edges and that’s what’s it’s about.

What does it mean to be a good person? We’re living in this weird political climate where like – it feels weird talking about it because I’m not an American and I’m only witnessing it from a social media point of view – someone can call themselves a religious person, but does that make them a good person? I don’t think so. I think you can totally reject religion and what it typically means to be a good holy sacred person, but I don’t think that makes you a good person.

Do you feel like that idea of musical purity still exists?

Perhaps that’s just an internal battle I have with myself a little more.

Even ten or fifteen years ago there was this idea of selling out or something, but that seems to have disappeared or at least diluted. Because it’s become more difficult to make a living as a musician, maybe it’s become more acceptable for people to have their music on a commercial or just be more commercial.

I don’t honestly listen to a lot of pop music. I don’t like a lot of pop music that’s coming out for the most part. This whole top-house thing that’s going on, I’m like “Aahhh, the marimbas at the start and then the high-pitched vocal, that’s so unoriginal, why are you doing that again and again and again? We heard this last week and the week before with the other song”. I was pretty unsatisfied with the pop climate so I felt kind of reluctant to be entering it, but I hope that I’m bringing something a little new.