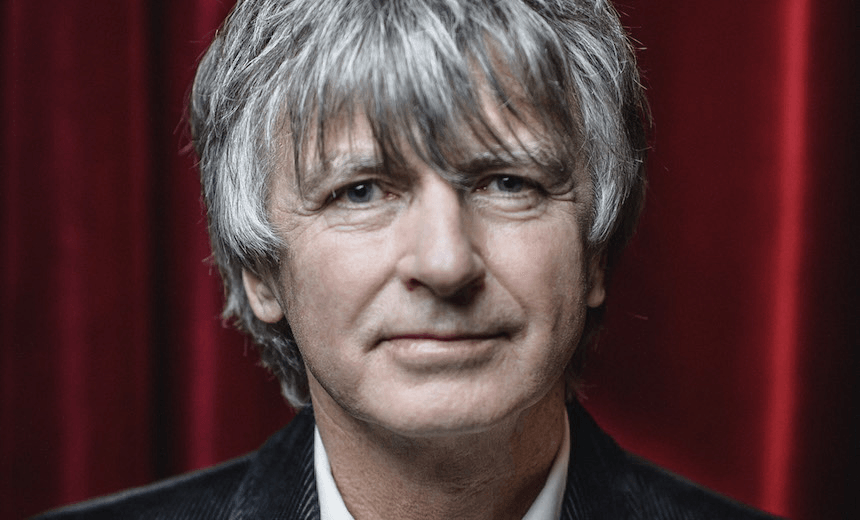 Neil Finn talks to Henry Oliver about his forthcoming album Out of Silence, likely the first studio album ever to be recorded live in front of a livestreaming audience.

Last week I spent an afternoon watching Neil Finn, the cool dad of New Zealand music, and twelve singers rehearse two songs from the album he will record at the end of August in front of a livestreaming audience. Finn, who has been experimenting with livestreaming since the early-2000s, when he had to borrow large computers to broadcast his music over dial-up, and his band are preparing four livestreaming events – one every Friday evening for the month of August. The first three will be in front of a live, in-person audience, and the fourth, on 25 August, will be the recording of Finn’s new solo album Out Of Silence, to be released just a week later on 1 September.

The idea, Finn tells me once the singers have clocked out for the day, is to have the songs so thoroughly rehearsed that Finn’s fans can watch the songs grow and develop over the first three sessions and then, at the end of the month, can see a studio album being recorded in real time, with each song being played no more than twice.

It’s early in the process and most of the singers are hearing these songs for the first time, but it’s amazing to me how quickly they pick them up and find new and unexpected ways for their voices to twist around, under and above Finn’s. After a single, straight run-through, they are pushing his songs where he may not have intended them to go, sometimes to his delight, sometimes not.

“If it works, it works,” Finn tells a singer who is simultaneously experimenting the most and doubting their own choices. “That high note needs to be angelic, not forced,” he tells another. “I think we should just try all the ideas anyone’s got,” he says to the group.

“They’ve all got quirks and foibles and characteristics that you don’t want to squash – that’s why I want them here,” Finn tells me afterwards. “The way that Sam [Scott] will wrap his voice around a phrase – I love the way he does it on Phoenix Foundation records. I want that quality. I don’t want to bend him into some kind of version of me.

“I relate it to an amazing, kick-ass campfire singalong. And I think it’ll be better than that. But when you end up, late at night around a campfire with really good singers, and I have had the pleasure of that a few times in my life, and people are just singing for the love of it and you get harmonies going absolutely nuts, it’s one of the most joyous feelings on Earth, so I’d love it to feel like that’s the vibe – a glorious campfire singalong.”

While he’s been playing music live over the internet since 2001, last year’s livestreamed Crowded House rehearsal kicked things up a notch. The rehearsal was preparation for their reunion show on the forecourt of the Sydney Opera House, where, 20 years earlier, the band concluded its farewell tour in front of 100,000 people. “That went really well and cemented my enthusiasm for doing them out of here [Roundhead Studios] as a regular thing,” he says. “You can run it yourself. It feels very different to TV. It doesn’t feel like the main people are the cameras and the director and you’re there waiting to be told what when to play. It feels like you’re putting on some kind of happening and there are no middlemen. You go straight to the internet and you can communicate with the audience directly. I try and keep them pretty loose and kind of like you’re in a lounge room which suits my kind of performing. So webcasting just seems like a natural place to be.”

But, from what I’ve heard, Out Of Silence won’t be be loose or loungy. The two songs I saw rehearsed were serious with assertive melodies, tender harmonies and searching, questioning lyrics. And, as Finn says, it may be recorded ‘live’ in front of an internet audience (there will be no in-person audience for the recorded session) but will not sound like a ‘live in studio’ record. “What I think is going to be cool about this is rather than getting a more causal, stripped down performance, an acoustic performance perhaps, I’m making probably my most complex record. Arrangement wise it will be the most sophisticated thing I’ve ever done.

“It’s been years since I’ve had extensive rehearsals so the minute you walk into the studio, the song’s ready to go. I normally start recording when the song’s half finished and you’re building the song as a recording. It’s got its merits but it drives you mad as well. That process had become a little bit too regular and too maddening.”

The purpose of the first three sessions (4, 11 and 18 August) is to hone the songs, get the group used to the space and rehearse the process of recording the group in a single take. For the Neil Finn faithful and curious, it’s an unprecedented opportunity to see his music evolve from week to week as Finn and the band listens to and expands on each week’s work. “ I like the sense that you can see the songs develop a little bit,” he says. “There might be an opportunity to let the songs be exposed in less than finished form so people see them unfolding and by the time we get to the last one, everything’s super well arranged and good, people will already know the songs a little bit and will enjoy seeing them get to that stage.”

The whole process shows Finn’s continued interest in the way music production and consumption are changing on the internet. For someone like him, who achieved the highest levels of critical and commercial success in some of the best years to be successful in music (the ‘80s and ‘90s), it’d be easy to continue working within the music industry model he grew up with, but Finn is excited about the ever-changing potentials the internet offers musicians. “I think music is served well by the internet generally,” he says. “Because it at least gives everyone an even chance of getting noticed if they’ve got something really good. There are things wrong with it – there are things wrong with every technology – but I think the webcasting thing is really under-explored. The feeling of being connected directly to your favourite artist and him or her talking to you directly through the internet is underdone.

“I’m hoping that the idea is strong in itself. The more you go on, particularly with music the way it is at the moment, you realise you have to be thoroughly excited by the path you take and make it distinctive in its own way from anything you’ve done and anything else that’s been done. Then you get a really good feeling in you that no matter what happens to it, it was fucking worth it. The minute you try and buy into what is the conventional wisdom of the day and suppress your own instincts or your own desire to do things differently, the more disappointed you are when it doesn’t work, because it wasn’t your idea. If it doesn’t catch on or people don’t get it, I’ll still feel really pleased about it because it’s a glorious idea. It has a wonderful collective spirit about it.”

The first song I heard rehearsed, ‘Chameleon Days’, seems to sum up his willingness to push the boundaries of how he gets his music to the people who might want to hear it and the beauty of the fleeting moments that the internet can deliver better than traditional methods of distributing music ever could: “That must be how the music’s meant to be played / One rush of blood / Then it’s gone / As fast as it came.”

The Spinoff’s music content is brought to you by our friends at Spark. The Out Of Silence livestreaming sessions can be viewed at Neil Finn’s Facebook page 7pm NZT on 4, 11, 18 and 25 August. To win tickets to the 18 August session, presented by Spark and Spotify, watch this video and answer a simple question.